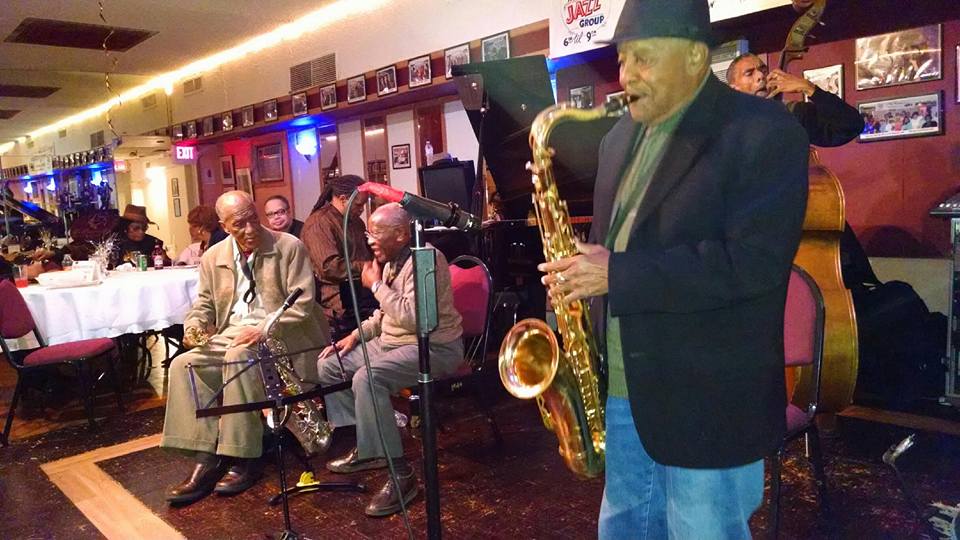 Trenton’s very own Mr. Tommy Grice would have been 90 years old on March 8th and although this community has been without his presence and his genius for almost a year and half, his musical expertise is still being felt through the hands, hearts, and talent of so many people both in and out of this diverse city.

Thomas Grice, brother to accomplish jazz trumpeter and composer, Gigi Grice, was a large part of the music scene himself as a saxophone player, before his brother convinced him to take up music education full time. A fateful decision on Tommy’s part, for he agreed to do just that and proceeded to change the lives of an incomparable amount of Trenton Central High School students.

Grice took teaching and mentoring to the next level, truly nurturing these young adults and putting them on a path to success that many couldn’t believe; not to mention the fact that he changed New Jersey’s capital city for the better by introducing the world to the creative force that is was – and still is.

Like the cliché goes, everything he touched turned to gold. After receiving his master’s degree from Columbia University, he took to teaching music education in Trenton like a fish to water. From the mid-1950s onward, Grice shaped the lives of the likes of Michael Ray who went on to play trumpet for Kool and the Gang, Sarah Dash and Nona Hendryx who went on to join forces with the original Patti Labelle and the Bluebelles (later known as ‘Labelle’), Kym Miller of Instant Funk, and many other notable musicians and artists.

In 2014, Grice told The Signal, The College of New Jersey’s student newspaper, “Trenton’s contribution to popular music is very strong. It’s not advertised. It’s not as transparent as it should be,” which is true. This community has been influenced by many and has influenced many; from jazz, to pop, to hip hop, to punk, and everything in between, Trenton has had a small hand in it all.

Michael Ray directly credits Grice and fellow music teacher, Thomas Pascarella, as being the most important editors and mentors to his music career. Composing his own pieces and playing trumpet for the “Most sampled R&B band of all time,” Kool and the Gang, are only some of the highlights of Ray’s extensive career. From started out alongside Patti Labelle and the Bluebelles to The Delfonics to Kool and the Gang and his own funk meets jazz band Michael Ray and The Comic Krewe. All of that in addition to being a stellar live performer and putting his talent to the forefront of the stage with the likes of U2 and Phish.

Labelle, as a band in itself, is a story to be told. Founding members Sarah Dash and Nona Hendryx were both students under Grice, of whom mentored them in high school and prepared them for their young careers as do-wop stars and a swift competition between other South Jersey/Philadelphia based pop groups. Their vocal abilities worked seamlessly with the songs they sang and their talent lent themselves to an evolving career, allowing them to credit their teaching under Grice for making them fluid between genres.

Grice, as a teacher, musician and (because he was in touch with every passion of his and his community) deacon at Shiloh Baptist Church, was dedicated to all he did. He approached music as not just a physical, sound producing concept, but as an art form and an outlet for himself, from others, and for the people around him. His creativity and dedication to all aspects of his craft not only is proved to have changed the  lives of many of his artistic students, but it also prompted him to spread the power of music to everyone in this community, because while it is taught in schools, it is not often done so with as heavy as a hand as it used to be. Therefore, with this realized, Grice and some of his equally as passionate former students came together to give this city another piece of history, music, and culture: the Thomas Grice Academy of Music.

This non-profit school has been right here in Trenton for the last six years or so and has not only become vital to the community through events, education, and – of course – music, but it has opened the eyes of many that Trenton has the talent, the history, and the resources it needs to be much more than just simply “Trenton, New Jersey.”

The Thomas Grice Academy of Music, which honors Thomas Grice and his powerful teachings, has a mission to provide a cohesive program of musical instruction, coupled with academic, cultural and social mentoring that will help produce well rounded young citizens to lead productive lives in our communities and in the arts.  The Academy aims to be a leading, teaching, learning and enrichment model to efficiently prepare urban youth for participation in the music industry as professional musicians and as responsible community-based citizens.

City Gardens in Trenton is another history laden building in Trenton that is attached to many big names in culture and society. Writer and comedian Jon Stewart served as a bartender at the club for three years in the 1980s, while front men of punk rock, The Ramones, played at the small, but staple venue a monumental 25 times.

Peter Buck from the always experimental rock band R.E.M. has said that sitting outside City Gardens on the tour bus with his band mates (including legend in his own right, Michael Stipe) inspired their song “Perfect Circle,” for he felt nostalgic and emotional watching these young Trenton kids play football and depicted that in the lyrics of the song.

More than just the capital city of New Jersey, Trenton is home to one of the richest histories that this state has to offer. From politics, to museums, to art, Trenton has housed it all. This city has rich cultural background when it comes to music, specifically, and it often goes unnoticed or the true depth of it has been forgotten about.

Thomas Grice, the late musician and music educator, combined his knack for mentoring and his passion for music (which was in his genes, after all, being as his brother is world renowned jazz saxophonist, Gigi Grice) starting in the 1950s and starting from that moment and lasting until his passing in 2017, he made sure to make Trenton a staple on the musical map.

Sarah Dash described Trenton as an underrated, unnoticed version of Nashville. As we remember Thomas Grice, we also recognize what would have his 90th birthday as an important time to showcase his legacy to the community and the world. Music in and around Trenton helped shape generations, an era, and an immense amount of spectacular musical prodigies. Grice’s ear for good sound and pure talent led him to help discover the talent of Sarah Dash, Nona Hendryx, Michael Ray, and many others who took jazz, blues, pop, do-wop, and funk and make something real and something passionate out of it.

Perhaps without Grice there wouldn’t be such a lively music and arts scene in Trenton or such a rich history or so many influential connections. One thing is for sure: he should continue to be remembered and recognized as one of the most powerful men, musicians, and teachers this city, this state, and this world has ever seen.

You can find out more about Thomas Grice and Trenton’s interconnected, influential music and arts scene by looking into Trenton Makes Music and this interactive onodo map.