Home Features Arts, Culture & Entertainment A Superhero Among Us: Maurice R. Mander and the Rise of HBCU... 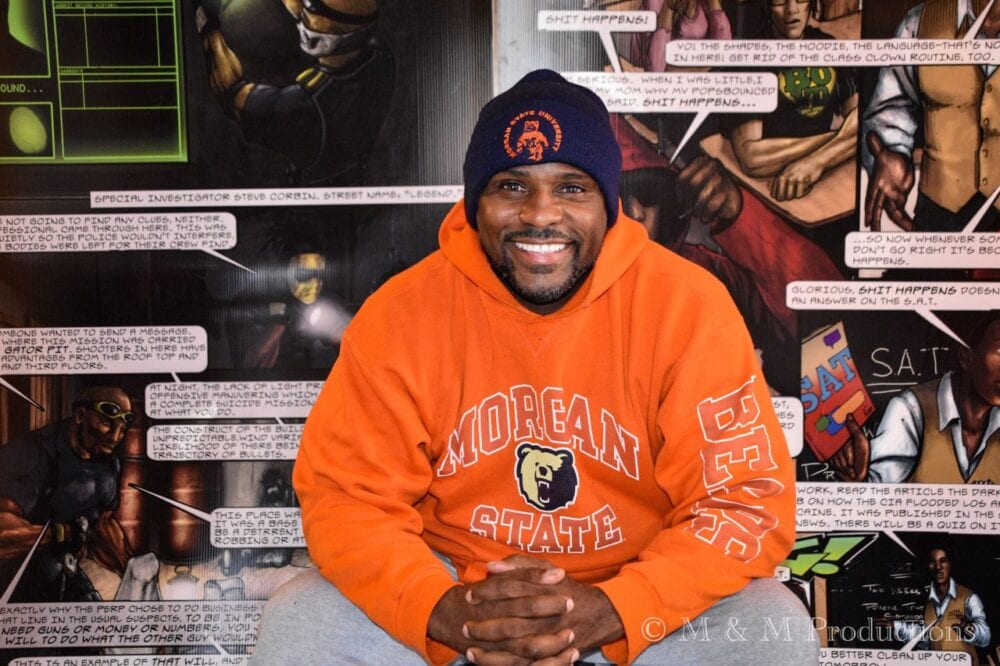 Writer, educator and Trenton-native Maurice “Raheem” Mander has dedicated the past two decades of his life marrying his love for history, creativity and his hometown of Trenton, NJ into a comic book titled ‘Surian Seed:HBCU Superheroes.’ The comic, and soon to be animated film, follows a group of superhuman Trentonians that graduated from HBCU’s (historically black colleges and universities), like Mander himself. Through his storytelling, Mander meshes together the fictitious elements of aliens and superpowers with the unique experience of community members in Trenton.

“I wouldn’t be here if it wasn’t for my city,” said Mander. “We are the summation of our experiences, and while my experiences haven’t always been positive, I’m still here. So you take lemons and turn it into lemonade.”

Mander grew up in the Donnelly Homes area of the city in the early 80s playing football for Trenton Central High School (TCHS). According to Mander, as a teen, residents of Donnelly Homes and Miller Homes had a hostile relationship towards one another. However, because he was an academically inclined athlete from TCHS, he was able to stay out of trouble.

“If you’re from our projects, and you walked pass Miller Homes, and you were identified as being from Donnelly Homes, the fight was on, but when they saw me wearing a football jersey, I got a pass, and that’s kind of how it was back in the day,” said Mander.

Throughout his high school years, Mander thrived academically and athletically, so much so that he received an academic scholarship to attend Lawrenceville Preparatory School in the ninth grade. However, Mander begged his mother to attend TCHS.

“I wanted to go to Trenton High because I wanted to play sports at Trenton High, so we broke a deal,” said Mander. “The deal was real simple. If you got there and your grades maintained, you could stay in Trenton High. If they dropped off, you had to go.”

Wanting to to stay in the city, Mander spent his four years at TCHS exceeding expectations. With unconditional support from his teachers, he was able to take part in opportunities uncommon for a young Black man at the time.

In his junior year, Mander was sent to Northfield Mount Hermon boarding school for the summer to take a chemistry course on a scholarship offered by his teacher. “It was kind of unheard of,” said Mander. “I was one of two Black people in a class on a campus that was 99.9 percent White.”

Mander graduated number 10 in his class rank out of 535 students. According to Mander, he would have been in the top five if it hadn’t been for his bad mouth as a student. Either way, the achievements he made throughout his high school experience paved way for many options when it came time to graduate. Although he succeeded academically, all Mander dreamed to do after high school was to play football. However, with such innate intelligence, his teachers, guidance councilors and mother gave him an ultimatum.

“[They] would not let me sign anything pertaining to football until I visited Morehouse College,” said Mander. “Literally, every phone call, any letters, I could not talk to anyone.”

He continued, “They got the money together, they sent me down to Morehouse College to visit Morehouse in Atlanta, Georgia, and once I got to Morehouse, I decide I wasn’t going to play football anymore.”

That encouragement and financial support given by the community at TCHS is a memory Mander holds strongly to this day. Even after graduating with a degree in history from Morehouse College in 1991 and continuing grad school at Morgan State University, he values his hometown of Trenton and its important role in shaping who he is as an individual.

“Essentially, my school was paid for. Anything academic was paid for by the community and later on by scholarships, and it’s so important to understand that even in this environment, as tumultuous as it was growing up, the academic support was so strong with the teachers,” said Mander. “They were highly invested in making sure that those students who they identified that want to do better, had the opportunity to do better. So, I can honestly tell you, anything that was academically enhancing to me as a student, my teachers got to me, and specifically it was Mrs. Quinn and Mrs. Morrison.”

After excelling in one of the toughest technical writing courses he had ever taken at Morgan State University, Mander realized he had the talent to produce detailed stories. With strong roots in the Trenton community, it was natural for him to channel his childhood upbringing and experiences into his creative works.

“I think, for me, growing up in poverty increased my ability to be creative,” he said. “Even thinking about making mayonnaise sandwiches and being creative with toasting the bread and adding the butter and sugar…you got to adapt.”

He continued, “As your mind starts to become more efficient at adapting, the easier it becomes for you to start building out a platform where you can tell a story.”

Once Mander became comfortable in his own storytelling abilities, he took a hiatus from 2000 to 2011 to produce the first encyclopedia version of his detailed comic called the ‘Surian Seed Universal Guide.’ Mander invested those 11 years into creating well-rounded, in-depth characters inspired by real individuals from the Trenton community. Unlike any comic book before his, he wanted to highlight the Black experience of Trenton and the multifaceted elements that make up its community.

Each character and personality within ‘Surian Seed:HBCU Superheroes’ reflects a concept relatable to Black culture in the city, starting off with the main character Isaiah Kemet, or in his alter-ego form, Infinite (pronounced infi-night). Isaiah is a 24 year-old honors history teacher at TCHS who has the relatability and fashion of youth culture, but the maturity and intellect of wise man. Through Isaiah, the class in his narrative learn about real historical accounts from this “cool teacher” icon.

“Teachers shape the world for children and I chose Isaiah as a being a teacher because through him, could come so much of what people need to learn,” said Mander. “He represents the academic energy that comes from HBCUs in the Black community.”

Another popular character to come out of ‘Surian Seed: HBCU Superheroes’ is Isaiah’s sister, Monique Kemet (Jaden in her alter-ego form). A social worker by day and leader of the superhero group called the ‘Order of Lights’ by night, Monique represents the spiritual guidance figure within the Black community.

“She’s that passion that flows through the Black community; that understanding that we can save every child, if given the right circumstances,” said Mander. “But she’s also conflicted about how you go about that process because she knows that there’s heroes around her that don’t mind killing to get the point across.”

According to Mander, the way ‘Surian Seed: HBCU Superheroes’ approaches death in the comic is another aspect that sets his story apart from common mainstream comic series’.

“When somebody dies in a DC or Marvel comic book, it’s a big deal. In my book, this is the norm, because people die and you can’t have superheroes or villains that live forever. It doesn’t work that way,” said Mander. “So it opens up with [Monique] being in conflict with, ‘how do we go about doing this without becoming what we detest?’ So, that’s kind of what Monique embodies.”

‘Surian Seed: HBCU Superheroes’ has a a variety of characters with comprehensive backstories and representative personalities, from Range, the worlds greatest assassin, that, according to Mander, is the, “embodiment of Black anger” and Architec, the 16 year old intelligent high schooler with an immature side. ‘Surian Seed: HBCU Superheroes’ has characters that embody the versatility of the Black experience Mander grew up immersed in.

“It’s going to be ‘The Incredibles’ big,” said Mander. “This is not a minor production. This is over the top with everything involved with the bells and whistles. It’s top-of-the-line.”

According to Mander, his team has a Grammy award-winning producer in line to score the soundtrack of the film. In addition, the animation studio (that is remaining anonymous at this time) has animations set that are, according to Mander, “on par with DreamWorks, Pixar and anybody else.”

Back in the summer of this year, Mander was offered a multimillion dollar contract for the ‘Surian Seed: HBCU Superheroes’ script. Being that it was his first offer, Mander turned it down. After taking his time to understand the intense production process he was getting into, Mander realized he wanted to command the creative control over ‘Surian Seed: HBCU Superheroes’ and has been working to produce this film under his own terms with his team of experts.

Although Mander and his ‘Surian Seed: HBCU Superheroes’ is expecting to reach great heights and anticipated to reach nation-wide attention, he is admit on keeping the connection he has with his hometown of Trenton, N.J.

That being said, Mander is in the process of planning a red carpet premier for ‘Surian Seed: HBCU Superheroes’ right here in the city of Trenton along with a book signing and a party. The one day line-up will be called ‘Surian Seed Day.’

With 2021 just around the corner, Mander is anticipating ‘Surian Seed: HBCU Superheroes’ to only grow from here, and he plans on taking his Trenton community with him all the way to the top.

“I put my city on my back wherever I go,” said Mander. “In all this national attention that I’m garnering… those people, they’re writing about ‘Surian Seed’ and ‘HBCU superheroes,’ but you’re writing about “Raheem” Mandar, Trenton, New Jersey, and the process that got me here and it’s important that people understand that part of the story.”

He continued, “People see that you’re from Trenton and it’s hard for them to believe sometimes that you’re actually doing this, but it’s okay. We’ll let them see.”