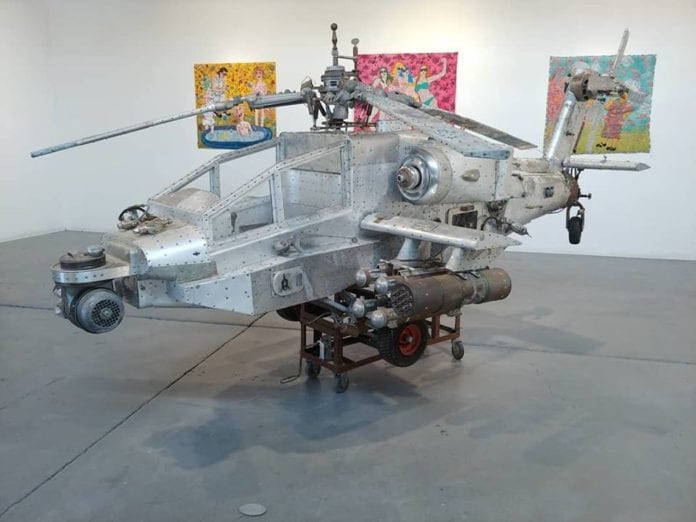 Bolts and Stitches, which held its opening reception at Artworks Trenton on Saturday March 16 from 7 to 9 p.m., was filled with music, food, and people who all came out to enjoy the artwork.

The gallery boasts various art pieces made by Peggy Blei and Gene Hracho, a married couple who met in art school and feed off of each other’s work. They both are able to inspire each other in many ways including through music and the materials they use to uplift themselves.

Peggy Hracho’s art is made up of different types of cloth and she uses various techniques to get the specific look she wants. These techniques include free motion stitching with the machine or hand stitching.

Generally her pieces take three to five months to make but some of the pieces included in Bolts and Stitches took about a year to complete.

“They’re great portraits… and I was consumed with the skill it took to put them together,” said Mary Moore about “Selfies Squared” featured in the gallery.

Gene Hracho’s immense art pieces are impossible to miss when first stepping foot into the gallery. He has worked his way up from small projects to very large projects such as his piece “Ridem” featured at the exhibit. The large projects that at are a part of the gallery can sometimes take years to make with everything that goes into the art.

Although the two styles of art contrast each other, the amount of detail and precision both the artists use are what they say brings the gallery together.

Both Gene and Peggy Hracho hope that people will come out and view their work especially all the intricate details.

“I hope that people agree it’s a fun experience to be around some unusual things,” said Gene Hracho.

The Bolts and Stitches gallery is open until April 13 at Artworks Trenton daily, and all art lovers are definitely encouraged to stop by and see the work for themselves!