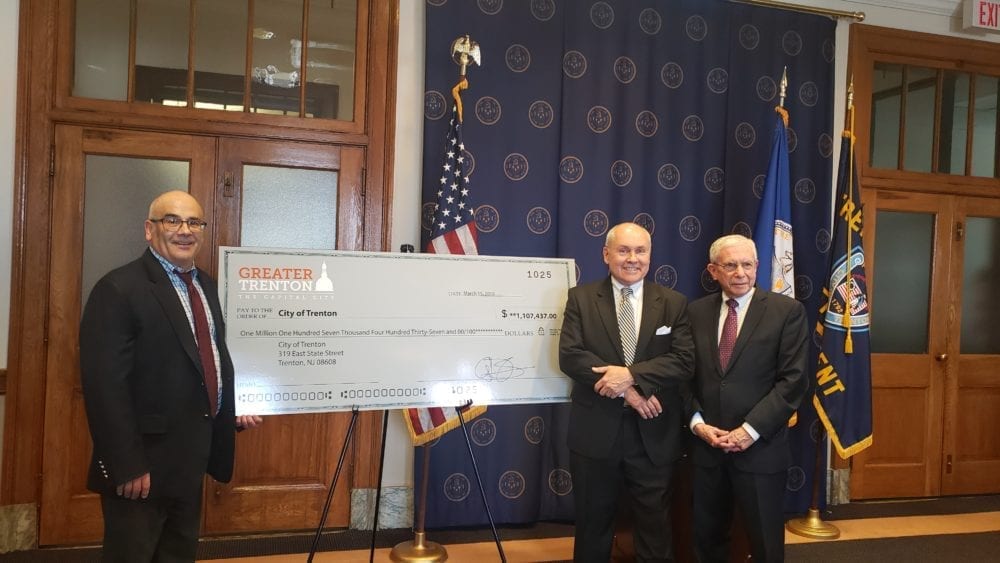 During an April 10th press conference at Trenton City Hall, a $1.1 million dollar check was presented to the City of Trenton to aid the city’s revitalization efforts. “Today we’re receiving a check for over a million dollars, which will go into demolition projects throughout Trenton to help revitalize the city,” said Trenton Mayor Reed Gusciora. “I thank New Jersey Housing and Mortgage Finance Agency (NJHMFA) Executive Director Chuck Richman and Greater Trenton Chief Executive Officer George Sowa for their creativity working with the US Department of Housing and Urban Development (HUD) to make sure the city gets optimal funding for community block grants.”

“This is a great day for the city,” said Greater Trenton CEO George Sowa. “These funds will be used as a supplement and catalyst to advance the city, creating quality affordable housing, equity for both current and future residents of the city, and opportunities for expansion and development.”

“We are delighted to be working in partnership with Mayor Gusciora to strengthen neighborhoods, stimulate development and economic activity, and encourage vibrant communities to grow,” said NJHMFA Executive Director Charles A. Richman. “As our state’s capital, Trenton has a long and rich history and NJHMFA is proud to support its growth.”

Mayor Reed Gusciora, Greater Trenton and NJHMFA reached an agreement wherein the City will repay HUD the final installment of the City’s three year Voluntary Grant Reduction.  As a result, the City now expects to receive the full amount of Community Development Block Grant funds (CDBG) for the 2018 fiscal year. Under the agreement, NJHMFA recommends that $1,107,437 in Urban Blight Reduction Program (UBRP) funds be advanced to the City’s Designated Housing Sponsor, Greater Trenton, to use for demolition activities consistent with the requirements of both the CDBG program and UBRP. It is expected that an additional approximately 45 vacant and blighted structures will be demolished under the CDBG Demolition program.

Last year, Mayor Gusciora, City Council President Kathy McBride and City staff met with HUD in Washington, DC to request consideration of a state funded demolition program for additional funds in lieu of a 2018 Voluntary Grant Reduction.  After consulting with Charles Richman and the NJHMFA leadership team together with Greater Trenton, NJHMFA agreed to the expanded scope.

The CDBG program is a flexible program that provides communities with resources to address a wide range of unique community development needs. Begun in 1974, the CDBG program is one of the longest continuously run programs at HUD.