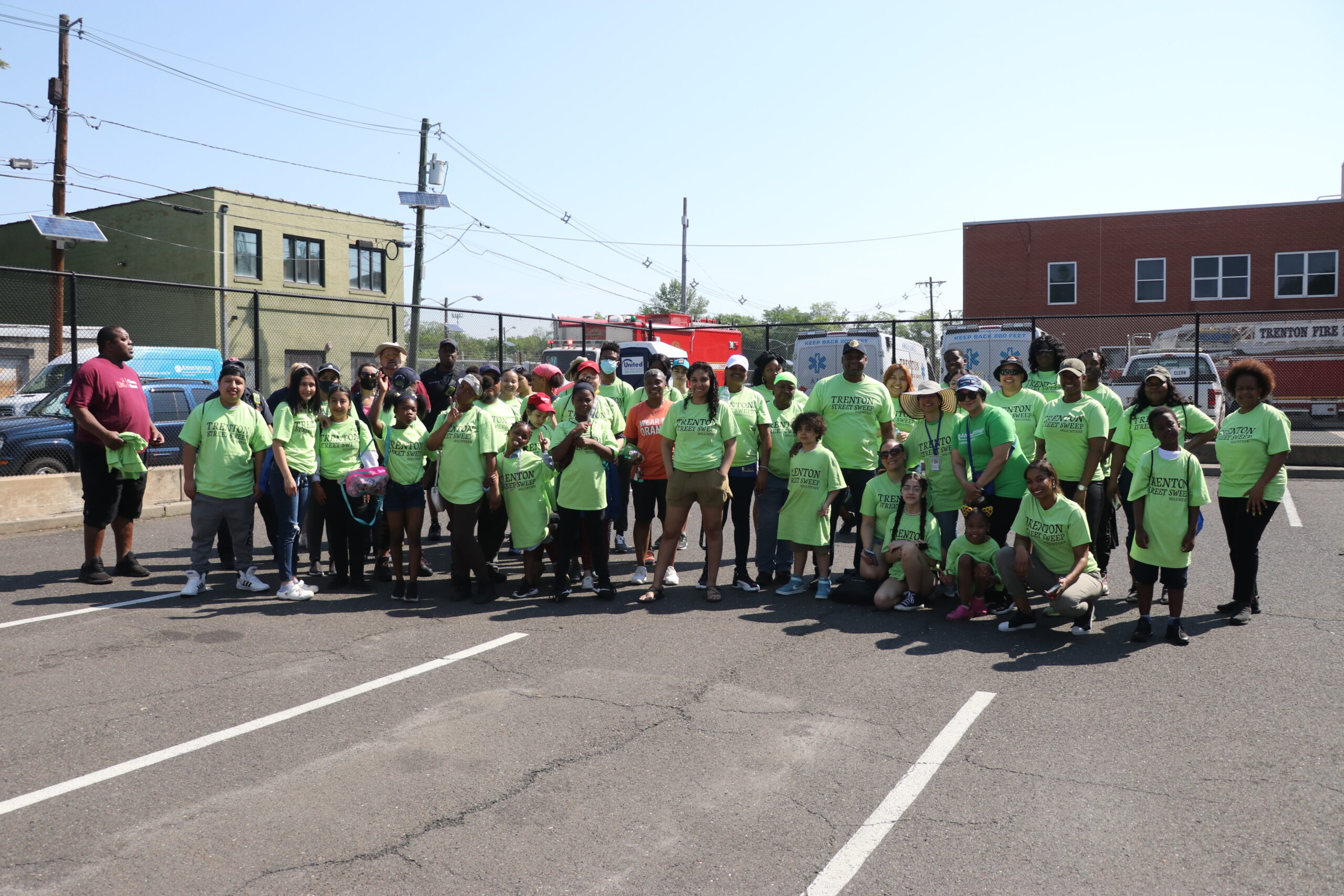 Before the sun beamed down on Trenton this past Saturday, a group of volunteers set to clean trash off of the city’s streets.

The initiative was created and led by Zhakier Seville, the Parent Liaison with Trenton Board of Education and Trenton Public Schools. They started on Perry Street and worked their way through Montgomery and back to the George Washington statue on Lincoln Highway, picking up litter along the sidewalks.

“I’m really excited. I’m surprised that so many unfamiliar faces are here. I know I talked to a lot of people about it and I’m really happy that so many people care about the community and are excited to like, clean and get their kids involved,” Seville said.

She explained that although they had a route planned, the goal was to be efficient in cleaning the area. “We want efficiency and to do a good job. So we’re going to stick to the streets but we’re gonna get as far as we can, doing a really good job making sure that the trash is picked up,” Seville said.

The group was helped out by the Trenton Fire Department who set up barricades to stop traffic for the volunteers. They worked thier way from Stockton to Montgomery and from Perry Street to Allen Street.

Part of the Street Sweep’s goals was to connect Trenton residents in the area. They invited the student Government from the Daylight Twilight Alternative High School to come out to help with the Trenton Sweep.

Shivangi Patel, a computer science teacher and the student government advisor at Daylight Twilight High School, explained that they were out here to learn how community services can make a difference.

“First of all, the students need to learn the importance of community… So showing kindness, sympathy. So these are some of the factors that we are trying to build up among students. Because when someone cares, right, it makes a difference. I want to show them that even a single thing, that it can make a huge difference,” Patel said.

“It makes the world better. It makes our community better. It’s fun for kids to come out here and actually do something instead of spending time indoors, we’re finally able to come outside from from COVID stretch our legs something…I hope this will show kids not to be nervous, not to be scared, to come out here and do this type of stuff. Nobody’s gonna judge. We’re all family here in a way,” Minor said.

There were tents set up to beat the heat, and community businesses set up to help. Two Trenton businesses teamed up with the group, Skil-Lit Cafe and Slime Lounge. Marquise Blackstone, co-owner of Slime Lounge with her seven-year-old daughter said that community services are a part of their identity.

Tamya Flagg, Manager at Skil-Lit, added that serving the community of Trenton is one of the ways businesses local to Trenton can help the city prosper. “Just to make the environment better, like a cleaner environment is always healthier for everybody involved. And to be a part of it and participate in this is great, it’s good to give back.”

Deonna Maldonado, Co-owner at Skil-Lit, agrees, saying that she wants to see more people come out to support local businesses. “In order to do so we have to have a clean area to go into. In other communities it’s clean or up to date and it’s a shame that we actually have to constantly do something like this because we don’t keep up with it as we should. But maybe we’re bringing attention and awareness to the people that live here…. First impressions are everything… If somebody comes to your city, you want them to know that this is a great city. It’s clean. It has great businesses and supportive businesses.”

Due to the heat, they would stop at 11:30 a.m. By the end of the morning, about 70 volunteers and firefighters collected over 30 bags of trash. Seville said she couldn’t have done any of this without the community.

“I couldn’t do it without the support of the community, right? Everyone’s here because they want to support they believe in the initiative, and they love the city of the people. So I’m really happy to see that that’s true,” Seville said. “Everyone helped out in small ways and in big ways, it was really a community effort that pulled the whole together in the end.”