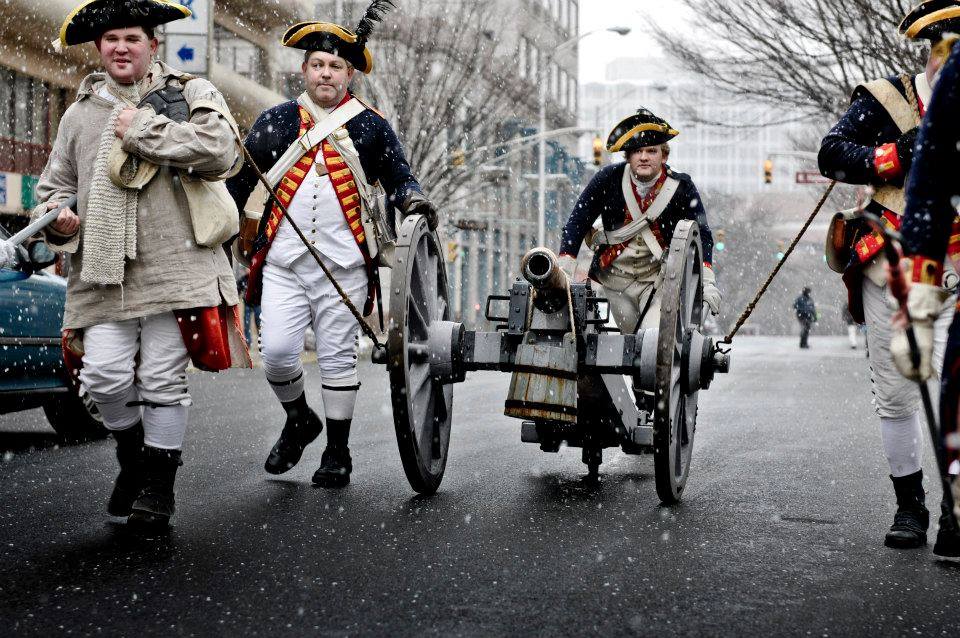 Colonel Johan Rall and his Hessian troops were abruptly awoken this morning by the sounds of footsteps and gunfire as General George Washington and the Continental Army launched a surprise attack on their occupation in Trenton.

General George Washington gathered 2,400 members of the Continental Army at McConkey’s Ferry on the Pennsylvania side of the Delaware shortly before midnight Christmas Day. His troops along with close to 100 horses and 18 artillery pieces made the treacherous journey across the frozen river finishing around 3:00 am. Even though the crossing took much longer than expected and was hours behind schedule, Washington and his troops set forth on the nine mile journey south to the Hessian’s headquarters in Trenton.

In blizzard conditions, Washington and his troops split into two commands, one led by Washington and General Nathanael Green heading east to approach Trenton from the North along Pennington Road, and the other command being led by General John Sullivan coming down River Road coming from the West.

As the sun rose at 7:21 am and with the northeaster still raging, American troops continued  towards Trenton still some two miles away. South of Trenton, General John Cadwalader failed to cross the Delaware River and launch a diversionary attack on the British command in Bordentown while General James Ewing was unable to cross at Trenton Ferry and seize control of the bridge over the Assunpink Creek preventing a potential British escape, leaving General Washington with much less men than expected.

At 8:10 am the first blow occured as part of General Greene’s division attacked a Hessian outpost in a cooper’ shop on  Pennington Road. After a brief skirmish Hessians at this post retreated to Trenton.

By 8:45 am General Washington’s surprise attack was in full swing as American troops converged on Trenton from the northeast (Princeton Road), northwest (Pennington Road) and west (River Road). Artillerly bombards the lower end of the town from across the Delaware River. Hessian troops in Trenton were slow to respond after a late night of Christmas celebrations.

At 9:25 am the Hessian infantry launched a final counterattack against American troops to the northeast and northwest unsuccessfully allowing John Sullivan’s division to enter Trenton from the west. Hessian troops were unable to retreat to a stronger defensive position south of the Assunpink Creek as fast-moving American troops swiftly moved in. Fighting raged in the streets and houses of Trenton for over half an hour.

By 10:00 am the battle was over as Colonel Rall was wounded a little earlier by two shots in the side while vainly rallying his troops on horseback in Queen Street. With their Colonel dying, control of the streets impossible, and an escape over the Assunpink difficult to achieve, the Hessians surrendered to the Americans.

The Hessians suffered an embarrassing defeat as they suffer 22 deaths, 83 wounded, and 896 taken prisoner. The American forces on the other hand suffered no fatalities from the battle with fewer than 10 men wounded and some dying only due to the harsh weather conditions they endured.

As daylight ended around 4:00 pm the Americans were buoyed by their victory and strengthened through the capture of six prized German “double fortified Brass three pounders,” other weapons, ammunition and supplies.

With the tides of the American Revolution turned, the Americans retired across the Delaware with their prisoners, rejuvenated to carry on the fight for American independence.

“Major Wilkinson, this is a glorious day for our country.”

General Washington to Major Wilkinson at the conclusion of the First Battle of Trenton, mid-morning, December 26, 1776.