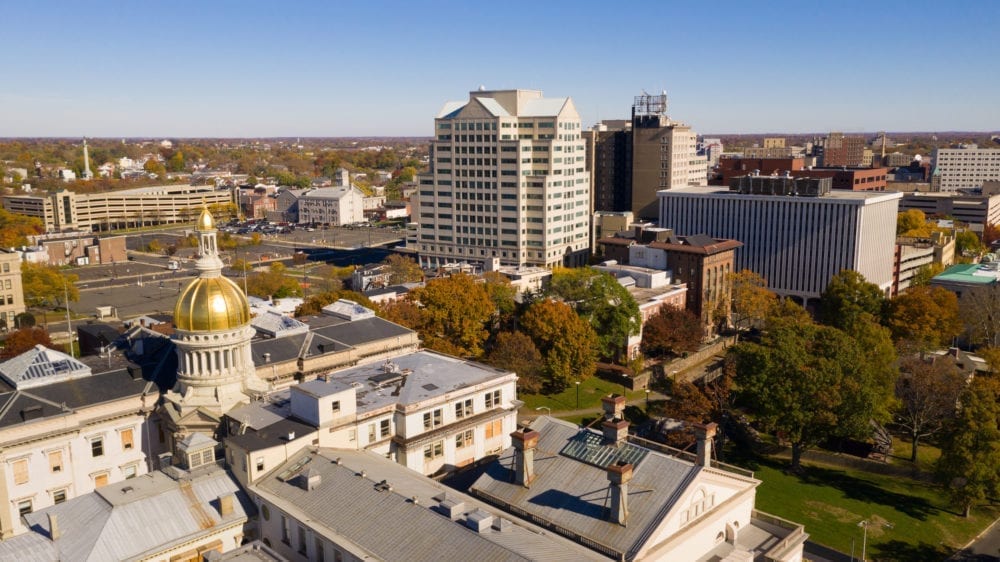 Greater Trenton held its board meeting earlier this month at Trenton City Hall as key business, government and community leaders reflected on 2018 and discussed revitalization efforts moving forward in the Capital City.

Invited guest speaker Jose Lozano, President and CEO of Choose New Jersey, spoke about his organization’s interest in and alignment with Trenton’s revitalization efforts as part of the group’s statewide initiatives. Under Lozano’s leadership, Choose New Jersey – dedicated to attracting businesses and developments to the State of New Jersey – has recently shifted its attention to attracting international companies in addition to its domestic recruitment efforts. The organization is working with the Governor, legislature, and New Jersey Economic Development Authority, to construct the next package of business and development incentives as outlined in the Governor’s economic plan. “We need to partner with organizations such as Greater Trenton to leverage resources and capitalize on opportunities in specific regions, especially in relation to the recently created Opportunity Zones,” said Lozano.

Trenton Mayor Reed Gusciora also provided his perspective on potential opportunities in the city. “There is increased interest in various development sites throughout the city including Roebling Block 2, Enterprise Avenue, and the Old Cook School,” said Mayor Gusciora, who spoke about multiple generators of demand in Trenton including the Cannabis industry. “We’re excited about hosting our inaugural Chinese New Year celebration on February 5th to attract visitors to the Downtown…and plans are in place for Art All Night to be bigger and better this year,” added the mayor.

“2018 was a productive year all around as we collaborated on a number of fronts to help catalyze efforts to reinvigorate the Capital City,” said George Sowa, Chief Executive Officer of Greater Trenton, who revisited some of the organization’s key efforts in 2018.

Around this time last year, Greater Trenton released its 2018 Downtown Trenton Residential Market Study, in conjunction with the Trenton Parking Authority, to determine the market potential and optimum market position for newly-introduced housing units in Downtown Trenton. The study, which garnered much local and national press, revealed a strong demand for up to 760 housing units in Downtown Trenton over the next five years with younger singles and couples representing the largest share of that market at 68 percent. As part of this effort, Greater Trenton developed and released a whitepaper to the State of New Jersey to incentivize state workers in Trenton to live in and become a part of the fabric of the city.

In the spring, Greater Trenton worked in conjunction with the City to finalize Trenton’s Opportunity Zone and also co-host an Opportunity Zone event attracting more than 80 developers, investors, and other interested parties.

After seizing on an opportunity to pitch Trenton as a potential location for Amazon’s 2nd headquarters in late 2017 and coming in at “21 out of the top 20 cities,” Greater Trenton found a new purpose for the proposal in 2018. What began as a grand submission to lure Amazon to the city of Trenton, has now taken on an entirely new life as it helps to create awareness of the city’s development opportunities and puts forth a vision of what the city could be.

The plans prepared for the Amazon HQ2 submission proved to be applicable and attractive to a single large user or a series of smaller users. As a result, Greater Trenton’s proposal has been re-purposed as a marketing piece targeted at potential companies, developers and investors. Reaching thousands of people, the books and digital slides have been used for high profile presentations, panel discussions and tours including by the Mayor’s office, the Governor’s Conference on Housing and Economic Development, the New Jersey League of Municipalities, New Jersey Planning Conference, and Princeton University’s ArcPrep initiative.

In the Fall of 2018, Greater Trenton launched TrentonDaily, which serves as a source for news on New Jersey’s Capital City from the lens of opportunity and progress. Founded and led by GT’s Vice President of Marketing Bryan Evans, the publication highlights people, organizations, initiatives, historic moments, events, arts & culture, and business attractions that make Trenton a unique and inspiring place to live, work and play.

Greater Trenton played an instrumental role in the submission process for a $100,000 award granted to the City of Trenton by New Jersey Economic Development Authority (EDA). The award is being used to plan the Trenton Production and Knowledge Innovation Campus (TPKIC) in the city’s creative, education, and transit districts.

During this elegant evening of cocktails, conversations and collaborations at the New Jersey State Museum, participants reflected on Trenton’s past, reimagined its future, and mingled with some of the most influential community and business leaders impacting the Capital City. The celebration honored the legacy of the late Caren Franzini, former NJEDA CEO and one of the founders and former co-chairs of Greater Trenton, by presenting the Caren Franzini Capital City Award to Anthony R. Coscia, Partner, Windels Marx Lane & Mittendorf, LLP.

A portion of the $100,000 raised from the event will be invested in Trenton’s youth through a scholarship fund that will directly develop strong writing, public relations and communications skills right here in downtown Trenton. This will be achieved by inviting high school seniors in Trenton, who are aspiring journalists and writers, to receive real world experience via a paid internship with Greater Trenton’s TrentonDaily. Also, through this program, students will have a chance to receive scholarships to help defray some college expenses.