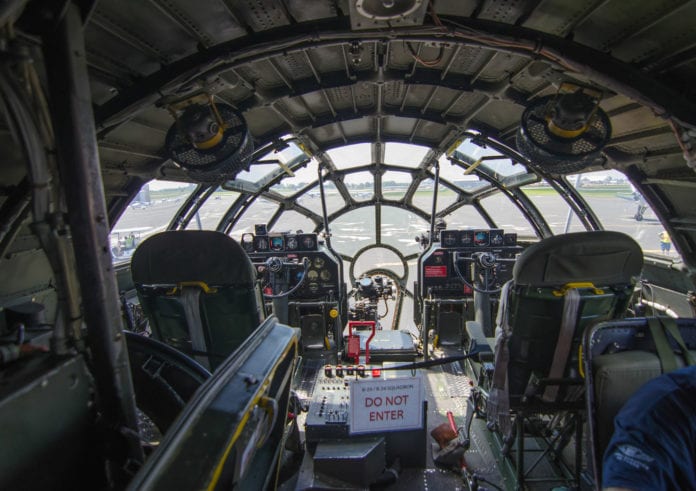 The Boeing B-29 Superfortress, FIFI will land at Trenton-Mercer Airport today, June 17th, at noon with additional aircraft scheduled to arrive as well. In preparation for an AirPower History tour, which opens to the public on Wednesday, June 19 through Sunday, June 23 from 9 a.m. – 5 p.m., the event will offer rides through supporting aircraft for five days.  The B-29 flies on Saturday and Sunday at 9:00 a.m. and 10:30 a.m.

Cockpit tours of the B-29 will be available beginning at 9:00 a.m., except on Saturday and Sunday when they will begin at noon. The bomber will be joined by a T-6 Texan and PT-13 Stearman.  The Commemorative Air Force (CAF) AirPower History Tour brings the sights, sounds, and stories of World War II aviation to airports across North America each year. Visitors to the ramp will be able to view all aircraft up close, purchase rides, and tour the B-29 cockpit when the aircraft is not flying.

The aircraft will be located behind the Signature Flight Support FBO at Trenton-Mercer Airport at 34 East Piper Avenue, Trenton,  NJ  08628. Access to the ramp is $10 for adults and $5 for youth age 10 through 17. Children under age 9 are admitted free. Aircraft rides range from $85 to $1,995 depending on aircraft type and seat position selected. Rides may be booked in advance and additional information about the event can be found at www.airpowertour.org.

FIFI was acquired by the CAF in 1971 when a member found her at the U.S. Navy Proving Ground at China Lake, California. The airplane was rescued and restored by a group of CAF volunteers and has been flying for more than 45 years. Since 1974, FIFI has been traveling coast to coast each year honoring the men and women who built, maintained and flew WWII aircraft and educating the next generation on their service and our history, attracting large crowds at every tour stop.

The Boeing B-29 Superfortress, first flown in 1942, began active service in the US Army Air Corp in 1944 and is best known as the aircraft whose missions over Japan helped bring an end to World War II. The B-29 also was used in the Korean War in the early 1950s and was a staple of the U.S. Air Force until 1960. Learn more about FIFI and her tour schedule at www.airpowertour.org

Through more than six decades of collecting, and flying World War II aircraft, the CAF has become the world’s largest flying museum. Their fleet of over 170 World War II airplanes are assigned to unit locations across the U.S. and supported by 12,000 volunteer members. Nearly all the aircraft are kept in flying condition, enabling people to experience firsthand the sight and sound of vintage military aircraft in flight. The CAF is dedicated to honoring American military aviation through flight, exhibition, education, and remembrance.