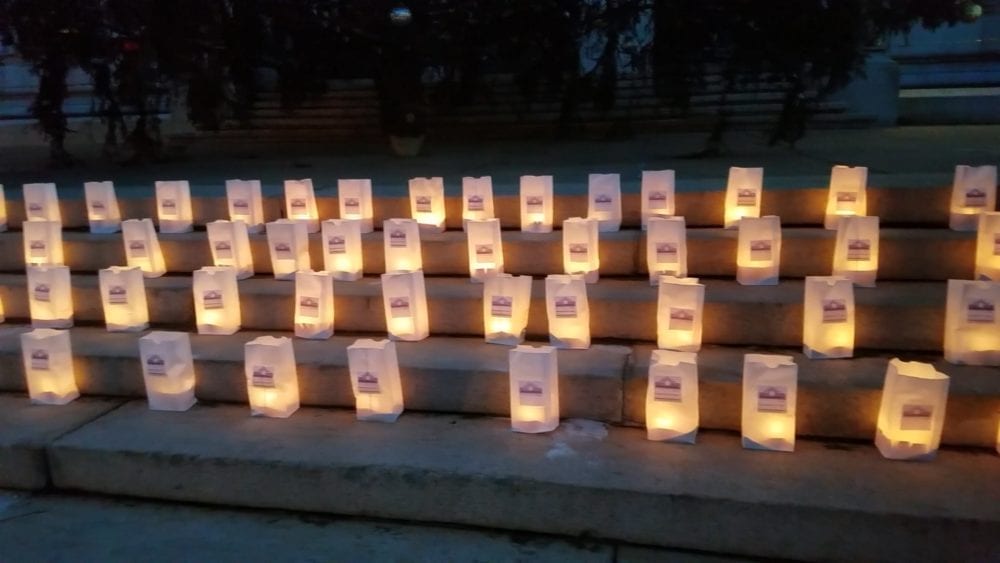 Candles, hearts and prayers illuminated and consumed the steps of City Hall yesterday evening as Womanspace presented its 17th Annual Communities of Light event to raise awareness of domestic violence and sexual assault. The candles come from luminary kits which help spread the important message that peace begins at home. As part of the ceremony, there was also an official lighting of the Menorah.

“We honor those domestic violence victims who have come before us, but we hope that there are less and less as we bring forth a greater awareness and understanding,” said Trenton Mayor Reed Gusciora, who called for the lighting of an additional symbol that evening to commemorate inclusion in the city. “I’m told that this is the first time we had an official lighting of the Menorah. Trenton is an inclusive city and we want to make sure that we welcome everybody.”

“Domestic violence and sexual violence are the most pervasive violations of human rights in the world and one of the greatest threats to lasting peace and development,” said Womanspace Board Member Jigna Rao,   “I think we can all agree that the time for complacency is long gone. The silence of these violations against any individual, irrespective of race, gender, age or socioeconomic status, has been broken — and now it’s time for a stronger voice.”

Rev. Karen Hernandez-Granzen, Pastor at Westminster, blessed the ceremony with an inspirational prayer of peace for domestic abuse survivors. “This is a prayer of thanks for the woman shelters shielding survivors of domestic violence every night, from the domestic storms ranging in our kitchens and bedrooms…”

“On behalf of Mercer County, we are a better county because of Womanspace and the volunteers that work with them,” said Mercer County Executive Brian Hughes. “We are better prepared for the domestic violence that reaches into our homes and hearts and makes us less of a people and less of a strong capital county. We would not be as together, as fulfilled, and as loving as we are today without organizations such as Womanspace.”

“With so many of our young girls, we see them coming from homes where they witness domestic violence and find themselves in relationships as teenagers,” said Mercer County Freeholder Chair Lucylle Walter. “I thank Womanspace not only for people trying to better their situation as adults, but for the message they continue to push out to our communities, our schools, and our colleges, that this is a cycle that can be broken.”

“For many years, I did protective services clinical social work and I still can’t erase the sights and faces that I had to deal with because of domestic violence and child abuse — so I can’t even imagine what those women, men and children, who have experienced that, have to carry in their minds and in their hearts,” said Councilwoman Marge-Caldwell Wilson. “Womenspace is haven that reaches out with services to help people understand that they can get through this.”

“Thank you Jigna Rao for representing the Womanspace Board well by sharing their important message that peace begins at home,” added Taylor. “I look forward to chairing next year’s COL lighting and hope all of you will join me as well. Let’s continue to shine the light even brighter and give hope to those living in silence.”