Home Community General Community Mayor Gusciora Restores Optimism to The City of Trenton in his Third... 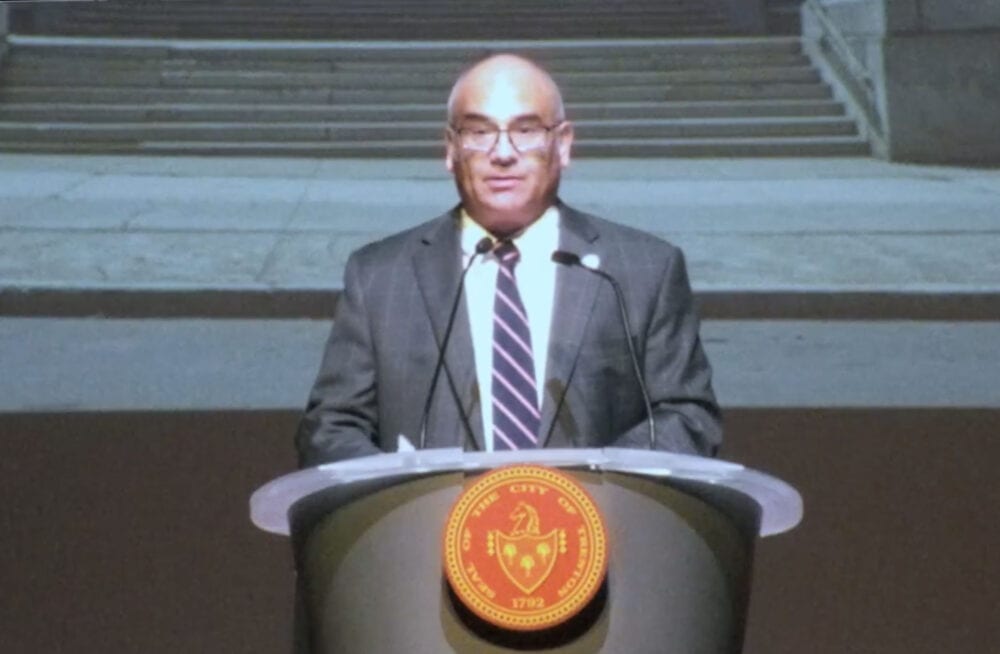 On Monday, November 9, 2020, Trenton Mayor Reed Gusciora delivered his third State of the City address in a live broadcast from the Trenton Central High School Auditorium. Despite varying technical difficulties during the virtual address, Mayor Gusciora relayed a sense of hope for the City of Trenton and expressed optimism to its residents as they progress through the number of challenges the year 2020 has brought upon them.

The beginning invocation was made by Rev. John R. Taylor of Friendship Baptist Church as he lead the city in a joint prayer. Together, the mayor and his cabinet prayed for the continuing prosperity of the City of Trenton.

Aware of the obvious, Mayor Gusciora addressed the fairly empty auditorium he delivered his speech from. “This is a room that should be filled with young voices, enjoying a production from their classmates or celebrating one of their many academic achievements,” he said. “Instead, these halls have remained largely empty due to the pandemic.”

However, instead of sulking in the predicament of the current global dilemma, Mayor Gusciora restored faith in Trentonians, that like the City of Trenton, students will overcome the hardships they face. “We’ve always had ups and downs in the capital city,” he said. “While facing many challenges, we’ll make it through these unprecedented times.”

At a time when Trenton has seen over 4,000 cases of COVID-19 and more than 80 deaths as a result of the virus, Mayor Gusciora grieves for the city. To combat the ongoing pandemic, the mayor sees to continue implementing strong actions to enforce the safety of the city.

The mayor prides Trenton on facing the pandemic head-on in March when opening Mercer County’s first COVID-19 testing center for first first responders. Trenton was also one of the first cities to examine local nursing home practices. Mayor Gusciora commends the city for rising to the occasion and aiding one of Trenton’s most vulnerable community’s, the elders.

“This virus weighs all of us heavily from the loss of life, the loss of income and the loss of businesses that are based in our city,” said Mayor Gusciora. “Despite these challenges, many of our economic projects have continued on to fruition.”

The City of Trenton has launched a shelter for displaced and homeless residents who have tested positive for the virus. In partnership with the Henry J. Austin Health Center, Trenton has secured a mobile health van used in equal rotation to all four wards in the city to test the community for COVID-19. These efforts, combined with the help of volunteers from local churches and organizations to ensure the safety of the city, were generously thanked at Monday’s address. “I couldn’t have asked for a better COVID-19 response team,” he said.

Despite the ongoing pandemic, Trenton is seeing a rise in economic development. Mayor Gusciora announced that since 2019, the city has seen 104 new businesses develop and open. “It’s why we created an emergency loan fund for businesses affected by COVID-19,” he said. “It provides 2% interest loans of up to $20,000. These loans have generous repayment terms and help cover payroll rent, mortgage and utility costs.” To date, 34 emergency loans totaling more than half a million dollars have successfully closed.

“We commend Greater Trenton on creating this important Businesses Helping Businesses initiative to supplement the City’s existing loan program and offering a true public-private partnership to assist businesses of all sizes and locations within the city,” said Mayor Reed Gusciora in a TrentonDaily article posted in May of 2020. “During these critical times, and from day one, Greater Trenton has been an invaluable partner helping to move the city forward.”

To continue uplifting business development in the city, Mayor Gusciora announced his plans to use the recent passing of the amendment allowing legal cannabis use in the state of New Jersey, as a way of implementing more work opportunities. “Now that the people of New Jersey have approved the legalization of adult use marijuana, the capital city is working hard to attract cannabis growers as a way to create jobs and economic opportunities for our residents,” he said. With vast amounts of industrial space available, Mayor Gusciora hopes to establish further economic expansion under this new law.

In addition to battling the current pandemic and furthering business development, Mayor Gusciora is planning to adhere to the collection of localized issues left unaddressed. “It starts with the basics; paving roads, filling potholes cleaning properties… for years, their needs were ignored,” he said. With the purchase of a new pothole filling machine, the city will continue to address these issues.

“Now, keeping our city clean is one thing, finding what to do with all our abandoned homes is another,” said the mayor. When first running for office, Mayor Gusciora promised 1,000 homes in 1,000 days. Although the mayor has yet to reach that goal, he said, “I’m happy to report that 712 previously vacant housing units are now occupied and we’re well on our way to meet our goal as hundreds of new housing units are completed within the next year.”

As the City of Trenton faces a severe disadvantage struggling in the climate of COVID-19, Mayor Gusciora used Monday’s State of the City address to reassure Trentonians that himself, along with his council, are addressing any and all problems that arise this year and years to come.

“2020 for the city of Trenton is a story about resilience,” said Mayor Gusciora. “Your resilience inspires me every day that I’m on the job. As we embark on a new chapter of America with our new president elect, let us all be thankful for the loved ones in our life, the collective work to ensure that our capital city’s best days are ahead of us and with pride and joy and ownership and relief that this pandemic is once again over.”