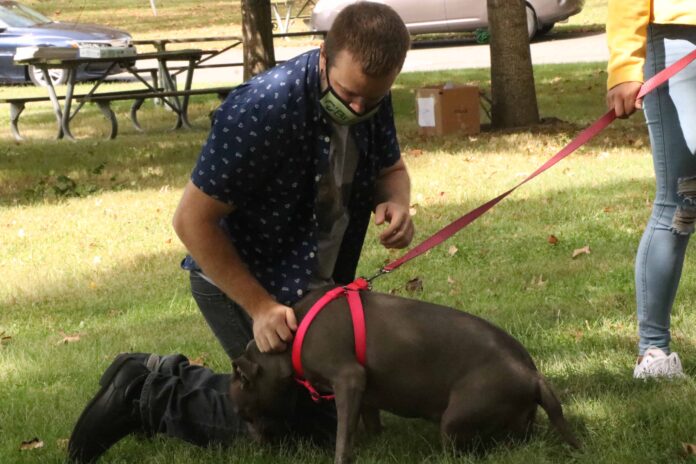 Pause4Paws brought all of Trenton’s furry friends to Cadwalader Park for the blessing of the pets as the Trenton City Museum at Ellarslie Mansion celebrated the Feast of Saint Francis of Assisi on Saturday.

The all day event, which allowed for people to come and go as they pleased, had more than one hundred pre-registrations, not counting museum walk-ins. A blessing of the pets was followed by agility training for dog owners, a balloon man, and a visit from the Trenton Animal Shelter. Joan Perkes, President of the Trenton Museum Society, said that she was happily surprised by the turnout.

“This was just a small idea with our pet memberships. It was kind of like entering into space where we did not know what the result would be, but we’re very excited for this first annual event…We’d call this an unmitigated success,” Perkes said.

Part of the event was an obstacle course set up by Hounds of Heck, a local company offering dog training that ranges from puppy manners and basic obedience to competition agility. “We have a little bit of an agility demo set up that we just finished running,” said Hounds of Heck owner Grace Heck. “In addition to running our dogs, we’re also going to have other people come out and get to do a little agility drive and see how their dogs like it, and if this might be something they want to do in the future.”

The obstacle course included tunnels, hurdles, a seesaw, a zigzag course, and a narrow bridge that dogs had to traverse all while being fed treats. Heck stated that any dog could run the obstacle course and set record times. All it takes is training.

“I think it all starts with the dog wanting to be engaged with their handler and wanting to work for that person. So we do a lot of motivation-building exercises. I have different types of dogs that like to work in different ways, so I have some dogs, some will work with toys, some dogs like food, some dogs like a mix of things. And you’re always trying to find what’s that one thing that is as exciting as a squirrel outside,” Heck said.

Nicole Baptiste brought her year-and-a-half old husky to participate during the day. “When I saw that there was going to be agility, I thought it would be cool for my dog to experience…She did okay, but she’s not too used to the tunnels and things like that,” Baptiste said.

Overall the coordinators of the museum were overjoyed with the success of the day. Christina Sasso, a board member at Trenton City Museum at Ellarslie Mansion, said that she spoke with people all day about the museum and learned from residents who had no idea what a hidden gem the museum was. “I’ve met many ladies who were enjoying this beautiful Miranda with a cup of beer and saying that they had never even known that this was here; lifelong Trenton residents. Our goal to get Trenton back into the museum,” Sasso said.