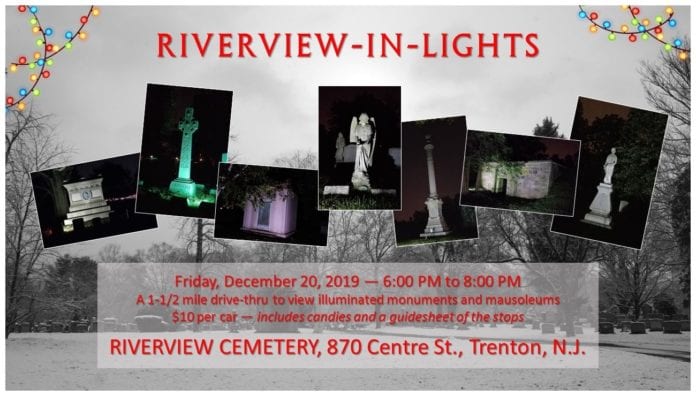 Yes, but only if it’s lit up! Tonight (December 20, 2019), the Trenton’s revered Riverview Cemetery is presenting an enjoyable, family-friendly experience, called RIVERVIEW-IN-LIGHTS: ILLUMINATED MONUMENTS & MAUSOLEUMS. From 6:00 p.m. to 8:00 p.m., you’ll be able to take in a planned tour in the comfort of your own car.

On a 1-1/2 mile drive-thru of Riverview Cemetery, you’ll delight in viewing nearly 30 illuminated monuments and mausoleums. The cost per car is $10 and this includes Christmas candies and a guide sheet that describes each of the stops along a tour route.

Established by an Act of the New Jersey state legislature on February 26, 1858, Riverview Cemetery was situated on a bluff in the southern part of Trenton, overlooking the Delaware River.

The Cemetery proudly tells of the many notables at rest along its tree-lined avenues: Charles Conrad Abbott, archaeologist and naturalist; George Antheil, the “Bad Boy” composer; Isaac Broome, sculptor; Walter Scott Lenox, founder of the world-renowned Lenox, Inc.; George Brinton McClellan, general of the Grand Army of the Potomac and governor of New Jersey; John Augustus Roebling, civil engineer and pioneer of wire suspension bridges, best known for his design of the Brooklyn Bridge; Washington Augustus Roebling 2d., who perished in the foundering of R.M.S. Titanic; Harold N. “Bus” Saidt, Baseball Hall of Fame sportswriter; Stanley Switlik, founder of Switlik Parachute Company and inductee into the Aviation Hall of Fame of New Jersey; and John Taylor, founder of the Taylor Provision Company, makers of the world-famous Taylor Pork Roll.”