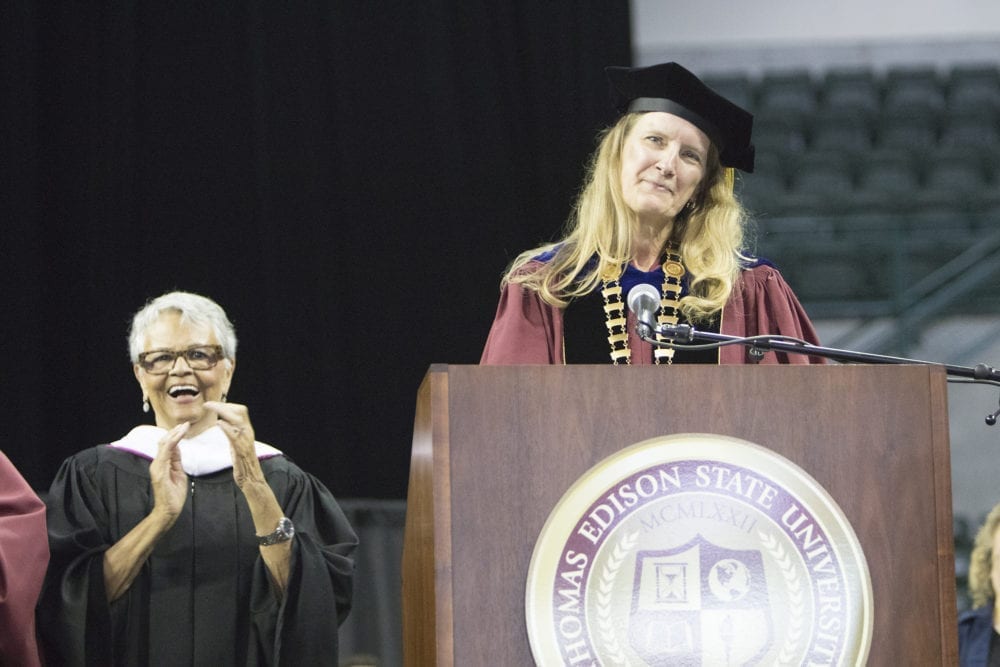 Thomas Edison State University will celebrate its 47th annual Commencement on Saturday, September 28 at 2 p.m. at the CURE Insurance Arena in Trenton.

The University’s class of 2019 includes 2,373 graduates, approximately 441 of whom plan to attend the ceremony. The graduates attending come from 28 U.S. states including California and Texas as well as Germany and the Pakistan.

An honorary degree will be awarded to Marilyn R. Pearson, who is an enthusiastic advocate for Thomas Edison State University and has given generously of her time in various leadership roles for 24 years. She served as Board of Trustee chair from 2007 to 2009 and as a member of the Public Affairs Committee, Finance Committee and the Nominations and Governance Committee for many years. She also served on the Thomas Edison State University Foundation Board of Directors.

Brig. Gen. Jemal J. Beale, who was sworn in as The Adjutant General of New Jersey in April 2018, will also be recognized with an honorary degree. A combat veteran of Afghanistan, Beale commands more than 8,400 soldiers and airmen of the New Jersey National Guard. He directs, controls and manages the New Jersey Department of Military and Veterans Affairs in the execution of federal and state missions. In addition, he manages all state veterans’ programs, commissions and facilities in New Jersey.

Colleen Geib, of Jersey City, NJ, a Bachelor of Science in Nursing graduate who earned her degree through Thomas Edison State University’s Accelerated 2nd Degree BSN Program, will give the Response to the Graduates. Geib, a third generation U.S. Army veteran who also served in the Peace Corps, is a registered nurse working in the Emergency Department at Jersey City Medical Center.

The university has awarded approximately 64,296 degrees to more than 58,392 graduates since it began providing distinctive undergraduate and graduate education for self-directed adults through flexible, high-quality, collegiate learning and assessment opportunities in 1972.