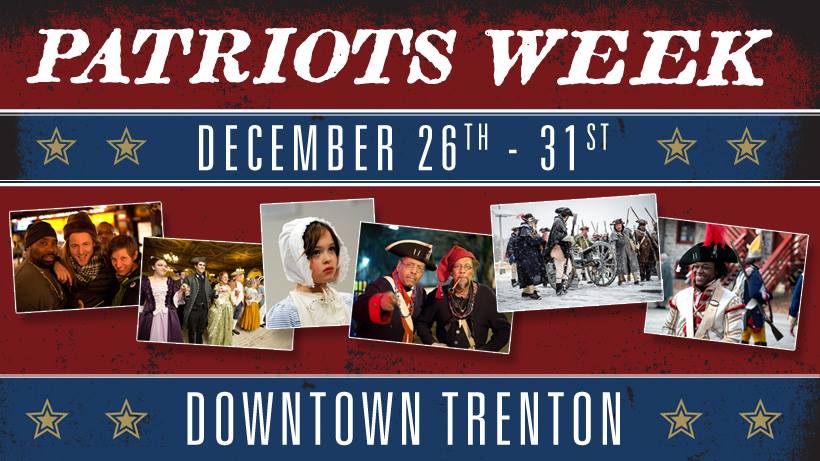 Each year New Jersey’s Capital City provides the unique opportunity for local residents and tourists to experience the events that shaped our nation during Patriots Week, December 26-31, 2018 (www.patriotsweek.com). From battle reenactments, planetarium shows, lectures and historic tours, Trenton landmarks will take you a step back in time, showcasing their colonial roots. Trenton, a Crossroads of the American Revolution National Heritage Area, is located in the I-95 corridor between Philadelphia and New York. The activities are supported in part by the Old Barracks Museum and Trenton Downtown Association (www.trenton-downtown.com) whose charge is to promote economic growth, arts, history and economic development in Trenton.

Trenton was Pivotal in the American Revolutionary War
It’s been 242 years since the Battle of Trenton saved the cause of the Continental Army and the American Revolution in 1776. On a frigid Christmas Day, George Washington gathered his men, crossed the ice-choked Delaware River and surprised a force of Hessian mercenaries who were encamped in Trenton. In the second battle, the army was also victorious. These two Battles of Trenton are considered among the
most decisive battles in the Revolutionary War.

10 Reasons to Participate in Patriots Week
With over 70 events taking place during the six-day period it’s easy for families and history aficionados to spend a few days in Central New Jersey. Here are ten reasons you should visit Central Jersey for Patriots Week:

1. Historic Tours – Begin the New Year with an expanded understanding of the significant events that turned the tide of the American Revolution from a lost cause to victory! This year take part in an  all- day bus tour on Dec 15th, 26th and 31st through Trenton and our fellow historic sites Washington Crossing and Princeton that explores the social and military questions of the Ten Crucial Days Campaign, December 26, 1776 – January
3, 1777.

Purchase tickets at www.patriotsweek.com. Trenton’s historic locations and buildings will be open for tours throughout Patriots Week, including the Old Barracks Museum and the 1719 William Trent House Museum (the domicile of the man the City was named for.) For those more interested in trekking on foot, join Ralph Siegel, of Trenton Battlefield Tours, who will lead a 10-block interpretive walk that narrates the minute-by-minute events of the Battles of Trenton. Check for schedule, location and fees at patriotsweek.com.

2. Battle Reenactments – See history unfold during the reenactment of the Battle of Trenton on Saturday, Dec. 29 at 11 a.m. Follow the soldiers from the Battle monument down Warren Street to Mill Hill Park. Then at 3 p.m. see the battle of the Assunpink in Mill Hill Park. It is FREE. barracks.org

3. Exciting Debut – “Images of the Motherland” Series – This widely acclaimed interactive living history program brings to life voices of people of African and African American descent. First installment is on Thursday, December 27th, featuring portraits of Omar
Ibn Sayyid & Sojourner Truth, 6 pm. The second installment of the series is on Saturday, December 29th and will feature the life of Bilali Muhammad, 4:30 pm. Both events held at First Presbyterian Church of Trenton, located at 120 East State St, both events are free.
www.imagesofthemotherland.com

4. See the Sky in 1776! – The New Jersey State Museum will celebrate the city’s history by hosting holiday planetarium shows featuring constellations and planets that occupied the sky when George Washington crossed the Delaware. Cost: $7 adult, $5 child. Visit www.state.nj.us/state/museum/ for dates and times.

6. Insightful Lectures – The Trenton Free Library presents Rand A. Mirante, lecturing on “A Fine Fox Chase: From Long Island to Prince Towne, 1776-77” on Dec. 27, 5:30 p.m. Visit The New Jersey Freemasons Grand Lodge Museum, and History Committee presents a lecture about Brother David Brearley the most important founding father that we don’t know about on Dec. 28th at the Historic Trenton Masonic Temple from 4 p.m.

8. Dance Like Colonial Elite – Learn to dance like the founding fathers during The Colonial Ball, held Dec. 28 at 7 p.m. at the Historic Trenton Masonic Temple. Wear your period attire. For tickets visit barracks.org

10. New Years Eve Concert – The Jersey Capital Philharmonic Orchestra closes out the week with the perfect New Year’s Eve experience: an early dinner with friends at one of our many excellent area restaurants, then off to the War Memorial for some great uplifting music. After the concert, it’s still early enough to make that New Year’s Eve party, go out for a nightcap, or just be home and in bed before midnight. Whatever you choose, the Capital Philharmonic fits right into your plans. Be part of this Trenton tradition on Dec. 31 at Patriots Theater. There’s no better way to bring in the New Year. www.capitalphilharmonic.org

OTHER NEARBY EVENTS
Washington’s Crossing Reenactments – Thousands gather at the banks of the Delaware River  in Washington Crossing, Pennsylvania to watch the reenactment of George Washington’s  daring Christmas Day river crossing on Dec. 25 at 1 p.m., Free. A great way to see the reenactment if  you can’t make it on December 25 is at the First crossing on Dec 9th. COST: $8 for adults, $4 for children age five to 11, and free for those under five. www.washingtoncrossingpark.org

Battle of Princeton – On Dec 30, 2018 catch a real-time historical tour of the Battle of Princeton, including reenactors of various Continental and Congressional regiments, as well as the famed British 17th Regiment of Foot demonstrate exactly where, when and why events unfolded that chilly morning in 1777. www.pbs177.org

For the full list of events, questions, parking and ticket information, call Trenton Downtown Association 609-393-8998, Mon-Fri 9 a.m. – 5 p.m. or visit www.patriotsweek.com. While visiting, our downtown don’t forget to grab a bite to eat at some of the area restaurants, learn more: www.destinationtrenton.com/visit-trenton/restaurants/