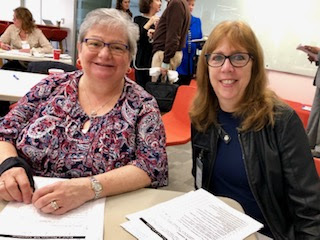 Longtime volunteer, Pam Kelly, recently accepted her nomination to the role of Chair of TASK’s Board of Trustees. In addition, the Board expanded to include three new members: Carla Bakr of Oaks Integrated Care; Steve Rubin of Sojo Industries; and Pastor Rupert Hall of Turning Point United Methodist Church.

Kelly, an educator with four decades of experience, began her relationship with TASK in the early 1990s, serving lunches with fellow members of her church. Leveraging her experience as an educator, Kelly also helped to run a children’s program that provided childcare to TASK patrons while they were on-site.

“I love that TASK was always food-first, but also that we do so much more, and we do it with dignity. One of my favorite events of the year was the GED Graduation Ceremony. I loved to see kids cheering on their parents as they reached such an important milestone as well as the support that the students showed each other,” says Kelly.

“I’m looking forward to being a part of TASK’s continued growth. Our work during the pandemic to expand our meal service program to partner sites has been valuable to the communities we serve. We have more than doubled our meal output since the beginning of COVID. I believe that expanding our hours to serve weekend meals is the next step and will offer even more benefits to our patrons and their families.”

Kelly assumes the role from Al Altomari, CEO of Agile Therapeutics, who remains on TASK’s Board of Trustees and continues to chair its Development Committee.

“Al’s leadership, especially during COVID, has been transformative for TASK,” says TASK Executive Director, Joyce Campbell. “Al has never said, ‘We can’t do that;’ he has always asked, ‘What do we need to make it happen?’ His commitment to TASK is exceptional.”

Along with the change in Board leadership, TASK is delighted to welcome three new members to the Board of Trustees, who have all demonstrated their commitment to TASK’s mission to feed the people of the Trenton area and improve quality of life.

Carla Bakr, a Trenton resident, educator and Counselor at Oaks Integrated Care, is well known for her community activism and advocacy. Her work in the mental health field makes her uniquely suited to assist in TASK’s important case management work as TASK and its patrons navigate fallout from the COVID-19 pandemic.

“I have heard from many people whose lives have been positively changed through the services provided at the soup kitchen,” says Bakr. “I have heard about eating, being directed to secure housing, educational pursuits, career development and confidence-building activities,” she observes, valuing TASK’s wholistic approach to the fight against hunger.

Steve Rubin, who was introduced to TASK by long-time Board member Martin Tuchman, developed a deeper understanding of TASK’s impact when his daughter volunteered at TASK for a service project seven years ago. After initially joining the Development Committee to help TASK sustain its fundraising efforts, Rubin began tutoring in TASK’s AEWP program and helped with a major storage expansion project using recycled shipping containers.

Says Rubin, “When asked if I was interested in joining the Board, I jumped at the opportunity. I love our community and want to do my part. I am excited to contribute in any way to perpetuating TASK’s incredible efforts and results.”

Pastor Rupert Hall’s path to TASK seems pre-ordained. In 2016, Pastor Hall became the Senior Pastor at Turning Point United Methodist Church, formerly known as First United Methodist Church in Trenton. Historically, the Church is also known as TASK’s original home, where community organizers served TASK’s first meal 40 years ago on January 13, 1982. A former lawyer and commercial banker, Pastor Hall has been deeply engaged in addressing issues of poverty and homelessness for years, also serving as a Board Member of the Mercer Alliance to End Homelessness.

“Having been invited to serve on the Board has provided me with an additional conduit through which I can meet residents of my ‘parish,’ here in the City of Trenton and beyond, at the point of their needs,” says Pastor Hall of his appointment.

Says Campbell, “The significance of Pastor Hall’s leadership at Turning Point and its significance to TASK’s founding feels like a full circle moment. This month, Turning Point joined TASK as a community meal partner, extending TASK’s reach to serve more meals to people in the community who need them.”

Of the entire TASK Board, Campbell remarks, “Our Board provides the leadership and guidance that helps TASK to serve as a leading agency in the Trenton area addressing hunger. With their oversight, we will soon serve our 6 millionth meal since our founding 40 years ago. Throughout the pandemic, we did not stop feeding even for a single day, and our Board provided us with the support we needed to adapt and reinvent our programs in order to meet the changing needs of the community. While I really hope we’re not still here in 40 years, I know our Board will continue to put our patrons needs – and dignity – first as we continue our fight against hunger.”