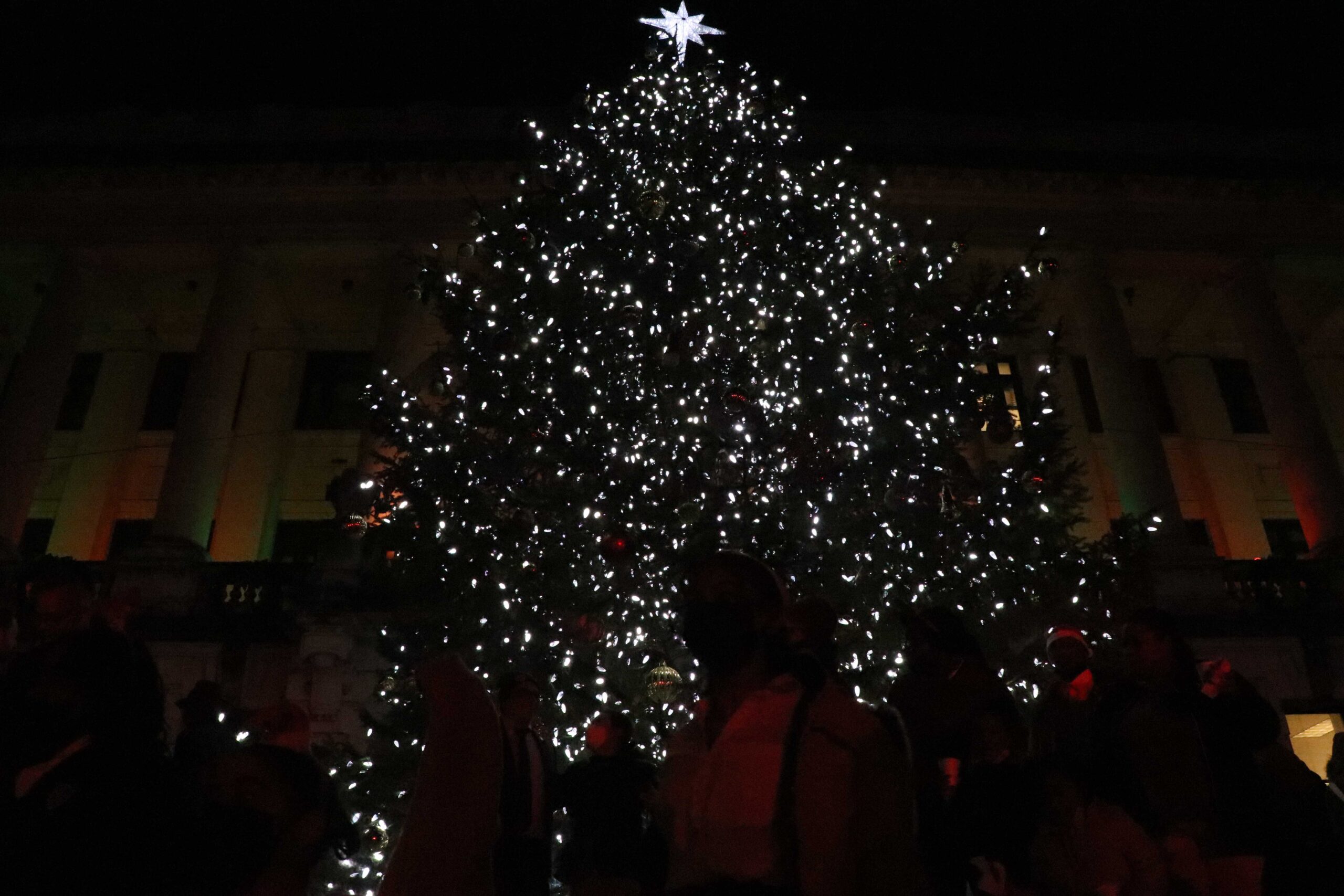 Over the past couple of weeks Trenton has swung into the holiday season with tree lightings, Menorah candle lights, and holiday walkabouts. Although the lack of snow is making for a green December, check out these holiday festivities that have taken place within the city.

“This is like the kickoff for the Christmas season for them,” said Barbara Gonzalez, Park and Recreation at the City Hall Tree Lighting event.  The ceremony began on Friday, Dec 3, at 4:30 p.m. at the Trenton City Hall Atrium and included musical performances from Trenton’s own TCHS School Orchestra and Sprout U School of Arts. The tree lighting ceremony followed at 5:00 p.m. at the front steps.

The Department of Parks and Recreation handed out gifts to all of the kids who performed and attended. “We’re giving out gifts, and also we’re giving out snacks for the kid for Christmas. You know, and I’ve been with the city for three years now. Growing up in Trenton, and I’m enjoying every minute of this,” said Gonzalez.

This was a part of a holiday giveaway sponsored by the Department of Parks and Recreation to help families in Trenton. They handed out puzzles, infant toys, race cars, and barbies to any child that came up and asked for it. “It’s awesome to see the community engaging with the kids, you know, liking everything that you do for them. All of the parents and everyone that comes, feel welcome. They feel that we’re doing better from Trenton; that’s what we’re looking forward to building: something really good and bringing Trenton back again,” said Luis Pedemont, community service coordinator for the Department of Recreation at the City of Trenton, said.

The next day Trenton Residents opened the front of their homes. Over 500 people in the region attended Mill Hill’s Holiday House and Window Tour this year.  This was the 55th annual Walkabout across Trenton historic District. This year’s tour was slightly different from previous years. The tour was all outdoor for 2021 unless homeowners welcome guests inside.

“So if you were going to decorate your front room, you were going to decorate it, so it looked like a display in a department store,” Terry West, an organizer of the event, said. “From there, everyone thought that was a great idea, and we would move forward with it.” Holiday Walkabout focused primarily on the first-floor room that faces the street, the home’s exterior, and for some, an area in front of the home where guests can relax, mingle and enjoy refreshments. Residents dressed their houses in Christmas lights, decorations, and plants that ranged from giant nutcrackers to a backyard with winter solstice decorations where guests served with chili pepper hot chocolate.

“I think there’s a lot of good to happening here. There has been for years, and sometimes they get a bad reputation. I want to see that change,” Hartman said.

Other holiday festivities are happening in the city, like the Trenton Department of Fire & Emergency Services holding their first annual Heroes Holiday Giving on Dec 18 from 11 a.m. to 3 p.m. at the Trenton Department of Fire and Emergency Services at 244 Perry Street in Trenton. Then on E Franklin Street, the J.R. Halsey Foundation is hosting a Christmas Festival from 1 p.m. to 3 p.m. Of course, there is Patriots Week at the end of the month for the history buffs!