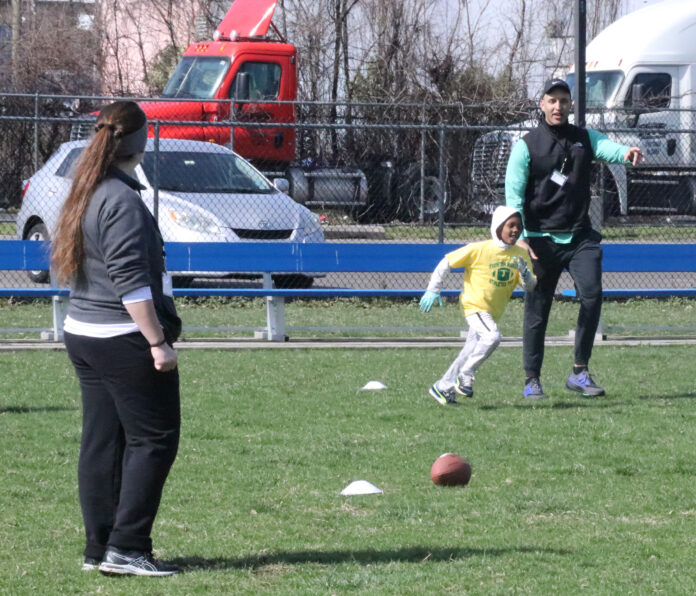 “We are doing a couple of flag football drills for the kids who came out to keep it competitive. Nothing too strenuous. Just getting the kids to learn the core values of (football) as far as like teamwork, enthusiasm, and camaraderie,” Hunt said. He laid out tracks for kids to run along, threw the footballs as kids sprinted, and coached them on the best techniques of the sport. “It’s nice,” Hunt said, “Like one kid couldn’t throw the ball this morning. Just seeing him be able to complete a pass now; that’s an accomplishment in my eyes. If he walks away and that’s the one thing he learned from us, that’s a win for me.”

Others held the same enthusiasm around the Capital City Sports complex as the different sports shared the field. Alongside the coaches with dozens of volunteers and sports experts for Trenton youth to learn from, Christopher Melvin is a sports analyst who profiles the best of the best. He worked with the kids throughout shouting helpful criticism.

“I was reviewing and analyzing some of the top players out here, not necessarily players, but rising athletes to see who has potential,” Melvin said. He explained that he was advising those who listen to him on top of looking for rising athletes. “To see who needs to work on this and works in that. I get to pull them to the side and give some advice.” Overall, he loved seeing kids out, even with the frigid weather in April. “So to see kids come out here and work hard is trying to maybe get into, you know, get a new sport or a new hobby, you know? That’s a blessing,” Melvin said.

Chester Jones, the founder and CEO of TMA, believes that the day was a success for him, the Trenton community, and the Trenton youth who participated.

“This is what we’d like to see every day,” Jones said,  “I truly believe that if we get our kids into training competitively, it’ll build their conflict resolution skills, and you won’t see a lot of the juvenile crimes and delinquencies.”

To learn more about TMA and Jones check out this TrentonDaily article below.