This two-day event features over 200 vendors selling vintage items, vinyl cassettes and cd’s, antiques, comic books, and original artwork as the punk rock movement occupies the Capital City. There will also be over a dozen food trucks, live music, tattooing, and costume contests each day from 10 a.m. – 5 p.m. 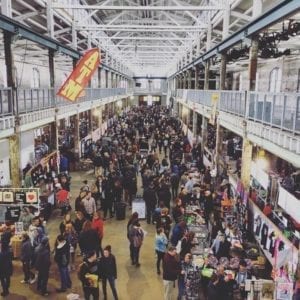 The Trenton Punk Rock Flea Market has become a mainstay in Trenton happening multiple times a years bringing thousands of patrons to the Capital City.

The mission of founder, Trenton native Joseph Kuzemka, was to create a flea market experience in his hometown that is unlike any other, bringing together vendors that touch upon the punk rock themes while adding the component of gourmet food truck cuisine in a safe, family-friendly shopping environment. Kuzemka is heavily involved in his hometown as he is also the founder of The Rockhopper Creative, LLC, an event management, graphic design and marketing firm located in NJ’s capital city where he runs other successful events in the Capital City such as Art All Night. He also was named the 2014 Person of the Year by The Trentonian.

They held their first event in 2013 for one day featuring just 50 vendors. Since then it has grown to feature over 200 vendors (more if space allowed) with live music and a dozen food trucks for multiple days and multiple times throughout the year.