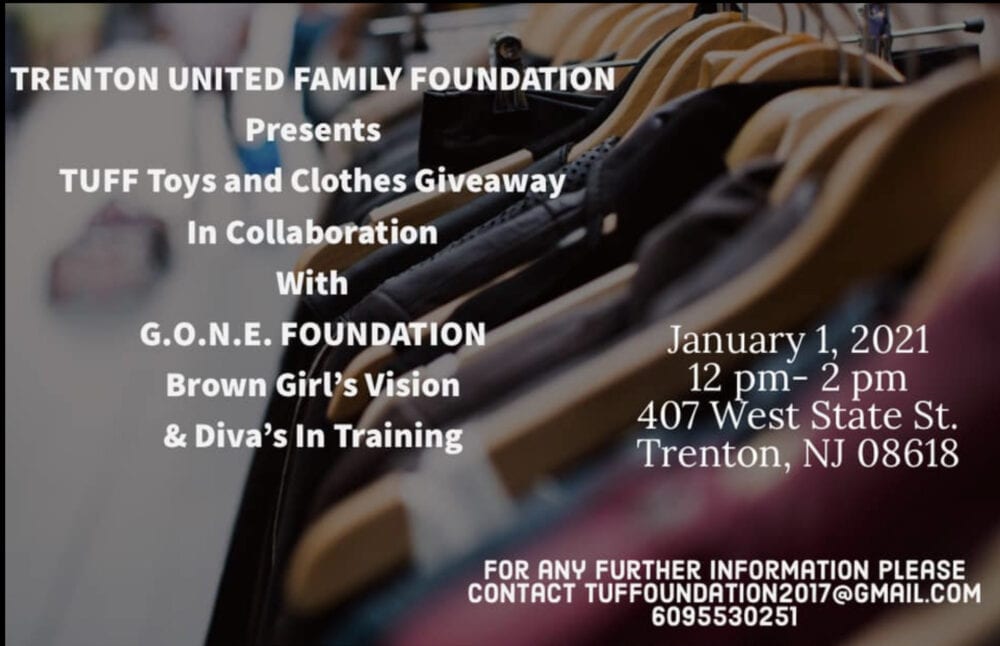 Today, January 1, 2021, the Trenton United Family Foundation (TUFF), in collaboration with the G.O.N.E. Foundation, Brown Girl’s Vision and Diva’s In Training, is hosting ‘TUFF Toys and Clothes’ giveaway. The event will take place at 407 West State Street from 12:00 p.m. to 2:00 p.m.

“I don’t celebrate Christmas. I only do stuff with my kids on New Year’s,” said Vincent Bridgett Sr., President of TUFF. “So I wanted to put the toy thing in there because I was already collecting toys anyway.”

All four organizations involved have been collecting donations for the giveaway separately. They are all going to come together this afternoon to provide for the local community.

According to Bridgett, TUFF has been collecting all types of donations for families in need over the last three weeks. Instead of a drop-off location, he has taken it upon himself to go out and pick up the clothes and toys from those wanting to donate.

“I just said I would just come get the clothes,” said Bridgett. “Whatever it is that somebody wanted to donate, I’d get.”

Although the drive is centered around clothing and toys for children, TUFF has been accepting monetary donations as well.”Donations are donations,” said Bridgett. “It doesn’t matter. Whatever it is, it’s going to go towards the event anyway.”

He continued. “Everything that we do is for our organization. So anything you give us, we’re going to dump it right back into whatever we’re doing.”

Tuff has mainly organized and spread the word of this event through a flyer and word of mouth. According to Bridgett, a large portion of the donations TUFF has received has been through texting and calling people that are asking to donate.

“That’s how I was getting in contact with people…through social media and, seriously, through just me texting people,” he said.

By offering to pick up donations, Bridgett believes TUFF is providing a service for those who want to do good in the community, but are unsure of how. “I have noticed people do want to do good, they do want to give back, they just don’t be knowing how,” he said. “But if you put something out there and say, ‘we are collecting donations,’ that’s when they reach out to you.”

In the year of 2020, Bridgett has noticed giving spirits have been at an all-time high. Although uncertain as to why, he believes it may have something to do with the COVID-19 pandemic.

“People have been different this year. They’re willing to be more helpful,” he said. “I know it was a sad year, but it also was a good year to reflect on and think about what’s really important.”

He continued, “This year means you stop thinking about yourself, stop making it about yourself, or made you start thinking that people might be in need…Somebody might need you to just talk to them. There’s little things.”

Even with predictions of rainy weather for this afternoon and indoor readjustments having to be made, Bridgett is certain the giveaway will be successful, despite how many families show up.

“I always say success is basically what you take out of it. I take an event as being  successful as I did help somebody. That’s it,” he said. “If one person come out tomorrow, I’ll be happy.”

TUFF asks that all families looking to receive toys for children bring their children with them to pick up the donation. For more information on TUFF and this event, contact tuffoundation2017@gmail.com.