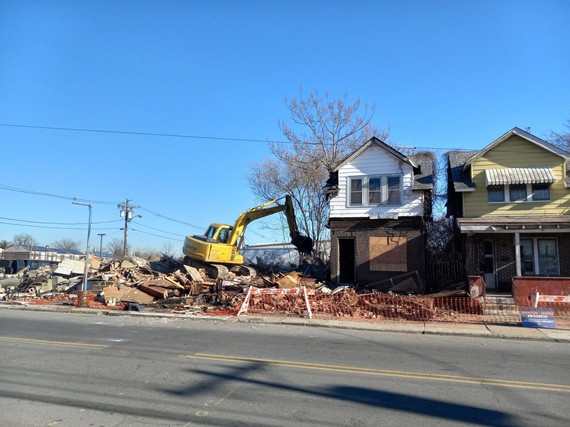 Mayor W. Reed Gusciora today announced that Trenton has nearly completed demolitions on a row of derelict properties on Martin Luther King Jr. Blvd. – including the infamous JoJo’s Steakhouse – as part of its sweeping urban blight reduction program that was announced in September 2021.

As of Feb. 22, 2022, Trenton’s Department of Housing and Economic Development (HED) has approximately 125 properties – ranging from active construction to collecting proposals – underway for demolition. Since the start of 2022, HED has submitted five demolition proposals comprising 66 properties. These efforts are part of Mayor Gusciora’s blight reduction plan, which seeks to improve public safety and encourage redevelopment by eliminating abandoned properties that are beyond repair and all too often become fire hazards and locations for criminal activity.

The most recent project on Martin Luther King Jr. Boulevard includes the former business owned by Joseph Giorgianni, a/k/a “Jo Jo,” who was convicted and sentenced for his role in a bribery scheme involving former Mayor Tony Mack, among other charges. According to federal prosecutors, the steakhouse was one of the locations where the defendants planned the corrupt activity.

“This effort is about cultivating a brighter future for Trenton,” said Mayor Gusciora. “What better way to show that then by razing a relic of one of the most corrupt eras in Trenton history. Now this area can finally be repurposed for the benefit of the surrounding community, whether it’s green space, safe housing, or new business opportunities.”

Trenton recently launched https://trentondemolition.com/, which outlines completed demolitions, current projects, and sites under review. A new reporting tool can be found at the bottom-right of the page or accessed directly at https://www.trentonnj.org/reportneglect.

Users can report crumbling roofs, squatters, illegal activity, fire hazards, vermin, or other conditions that make a neglected property dangerous to nearby homeowners, children, and pedestrians. The properties will then be evaluated by HED inspectors for consideration in upcoming rehabilitation, demolition, or redevelopment efforts.