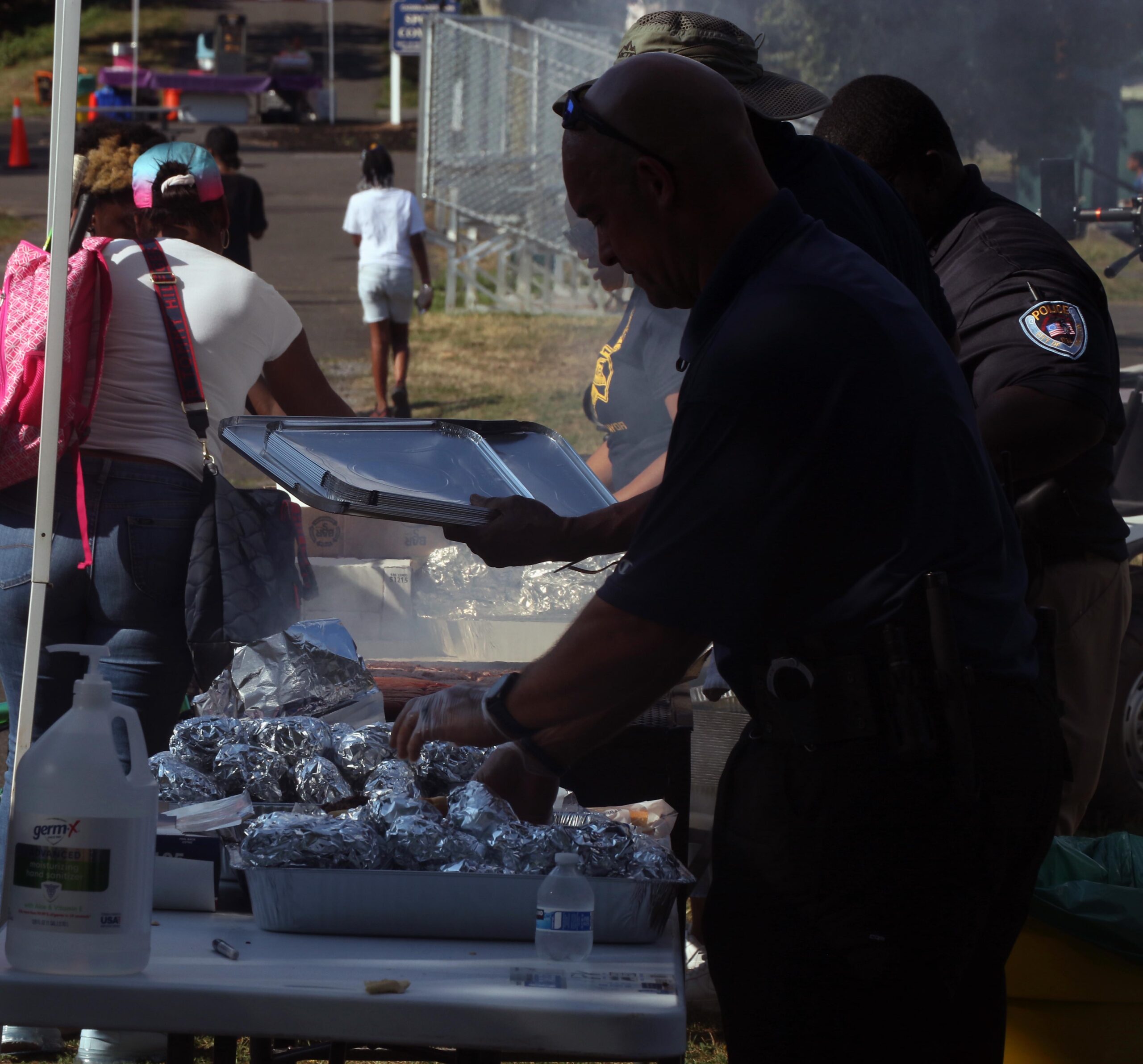 With over 30 different spots on the list for National Night Out (NNO), Trenton erupted into a festival across the city; with barbeques and music, Trenton residents gathered their things, opened their porches, and hosted their neighbors.

Clifton Anderson, the owner of Trenton Brakes on Martin Luther King Boulevard, was one of the many different organizers who were able to shut down his street.

“National Night Out was designed, in my opinion, as a crime-free night. The resident can safely come out, put on their lights, make dinner, and socialize together,” Anderson said.

Meanwhile, down on Race Street, Angela Towns served a feast for her neighbors. She has been cooking for National Night Out since she moved into Race street 15 years ago.

My neighbor came and talked to me about it one day…told me to join in, and I have loved it ever since,” Towns said.

“I just tried to do something to help the community every year,” Towns said. She was one of the many spots where residents pulled up their grills, slow cookers, stove tops, and coolers.

National Night Out provided a way for neighbors to meet the newest occupants of the neighborhood and also allowed police and local officials looking toward the upcoming election to hear complaints from Trenton residents. Mayor W. Reed Gusciora was on Race Street.

As residents tried to work their way through Trenton, others decided to set up camp. Gabriel Douglas is with the Ferry Street Community. She and her organization partnered with Trenton Social and The Bar and Food Restaurant. There, kids played hopscotch and threw water balloons. At one point, the Trenton Fire Department won a game of tug-of-war where the kids on Ferry Street had the firefighters outnumber two to one.

“I believe that communities are supposed to be here for each other. We’re supposed to support each other and be like big brothers and sisters. We live by each other. There’s a lot going on in the world, so having that sense of community. I feel like it’s just full of love. So we want to keep that going in the city,” Douglas said.

NNO is not as big as it once was. In the East Ward, Drema Daren organized the block party on E State Street between Hampton and S. Cook, set up a small camp, and watched as kids played in the street. She reminisced about how it used to be.

“We always sat outside in the summertime and played when we were kids… I’m the type of person who, since my kids were small, participated in many things. And I made things happen for my kids, but now they got older, so I can’t do it anymore like I used to…but I still do this for the kids,” Daren said.

There were kids on bikes playing in the street and adults sitting in the shade cracking jokes back and forth. A little bit down the road, Tiffany Thomas, a Trenton resident, said she was happy to see kids having fun again.

“The kids don’t often get much around here in this neighborhood because we have to keep them locked in. Now, for the first time, they can be in the neighborhood and be kids. That really is important for our youths, period. I remember back growing up. We had that. It was nice,” Thomas said.

This happened due to the efforts of Director Steve Wilson and his officers, who were spread across the city helping residents.

“National Night Out is a concentrated effort to show the community that the police department is here for them and serve them,” Director Wilson said. “It shows the community that their officers are approachable for their needs, and if they’re in distress, they can come and talk to the officers.”

In the middle was the crown jewel of the event, The Cadwalader Park Fair. Maria Richardson, Director of the Department of Recreation, Natural Resources and Culture explained that this was the second year they had a central location.

“This is what we would like for the city to be every week, you know, people hanging together and joining each other…And it has been successful in Trenton for many, many years,” Director Richardson said.

Trenton residents crowded the park as bouncy houses, obstacle course, soccer games and live music was set up. The police department made burgers and hot dogs, well tables and information booths that ranged from ATF to The Trenton Free Public Libary spoke with residents.

Belinda Owens, Trenton Resident, brought her two children out to Cadwalader. “It gets everybody to see each other. It’s nice to have all the children come out, and out of their house, Owens said. “We are in our safe area. This is for our children to let them know you could come outside or you could play and there are things to do in the city of Trenton that you will have to stay in the house all the time.”