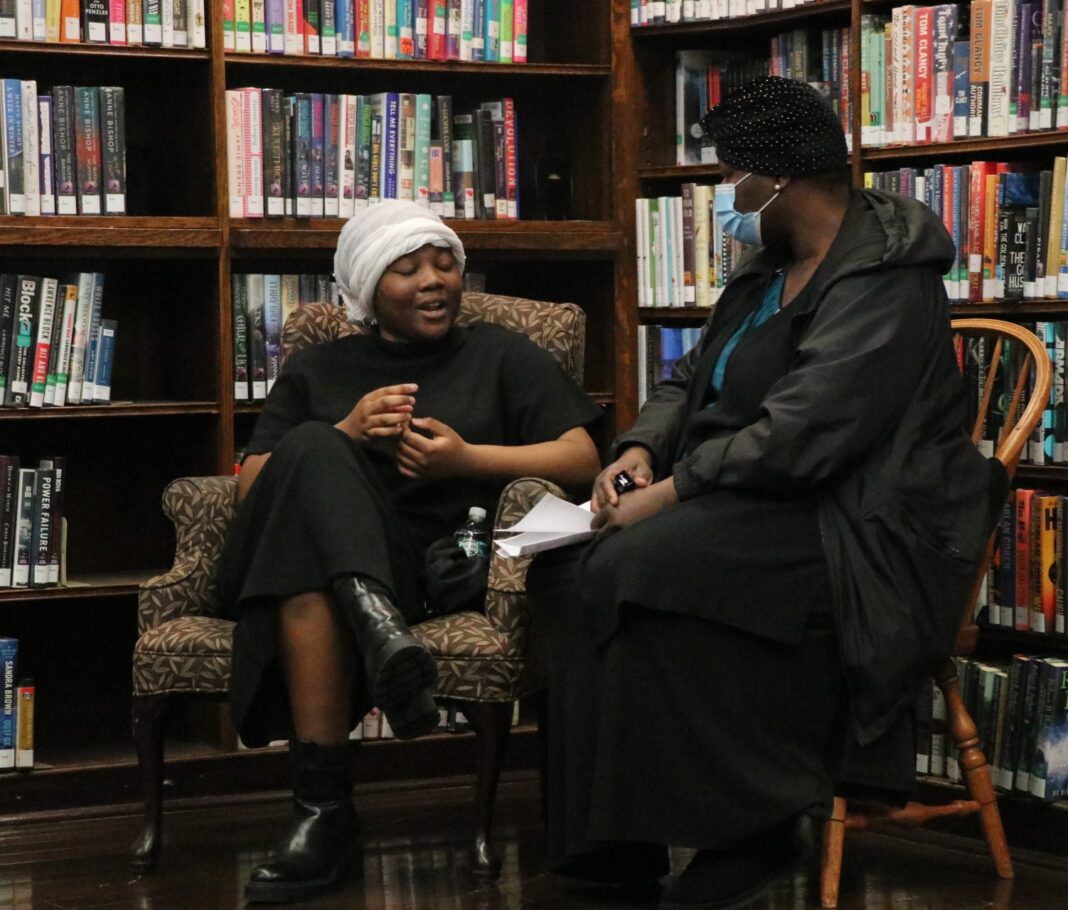 Sprout University students stood still in the Trenton Free Public Library on Saturday. They portrayed historical figures of African Americans from the Revolutionary War and answered questions from curious adults.

The idea behind the event was to talk about historical figures overlooked in history books. Rebecca Franco Martin, Library Director, said they were looking for a way to make learning more accessible.  “During those discussions, how do we portray the African American experience during the Revolutionary War in a way that would be open to the whole community, children, adults, and not something where you’re just sitting and listening to a lecture,” said Franco Martin.

SproutU came up with the idea to have students from the school use Gretchen Woelfle’s book Answering the Cry for Freedom. Students read through the novel and pick an historic African American figure to who they felt connected. Danielle Miller-Winrow, the headmaster of SproutU, said she was excited to see her students learn about their history.

“It’s great to enlighten my students in another area that, you know, they had no knowledge of; I’m just really happy that they asked my students to be a part of this program,” Miller-Winrow said. Visitors of the library were able to walk around the different students, talk with them and ask them questions about the person they were portraying. The students then answered the question as if they were that historical figure.  “So some of the answers are going to be different because it’s the perception of the reader about what happened in the book…They worked really, really hard on learning about their person.”

One student portrayed the character Boston King, a Black Loyalist and former slave who gained freedom from the British and settled in Nova Scotia after the American Revolutionary War.

With the students came a special guest Gretchen Woelfle, the book’s author, about the historical figures the students were portraying. She had been writing children’s books for over a decade when she started t the path to writing her latest book.

“I wrote a book about a white woman in the American Revolution. And I did research. I did background research on other women there, and I found Elizabeth Freeman, who was a Massachusetts slave who sued for her freedom during the revolution. Then I did background research on other African Americans of the era and found a whole bunch of people, some of whom I knew about, others were unknown to me, and I thought I could write a book about that.” Woelfle said.  Woelfle spoke with students at the Library event about their persons and was impressed by their knowledge.  “I’m just so impressed with their maturity and acting ability, and they’re staying in character speaking to me…I’m thrilled,”  Woelfle said.

Throughout it all, Trenton residents were there witnessing the history of America come to life. Local Historian Algernon Ward,  President of the sixth regiment United States Colored Troops Reenactors, said it was great to see young people explore the past.

“The interesting part is these were not very well-known personalities of African American descent, and what they did contribute to American history. They are fascinating stories, wonderful stories,” Ward said. “You end up learning a lot from young people who’ve done the research and can impart that information. So that’s a beautiful thing. And it also sets them up to becoming historians in the future to take over my spot.”