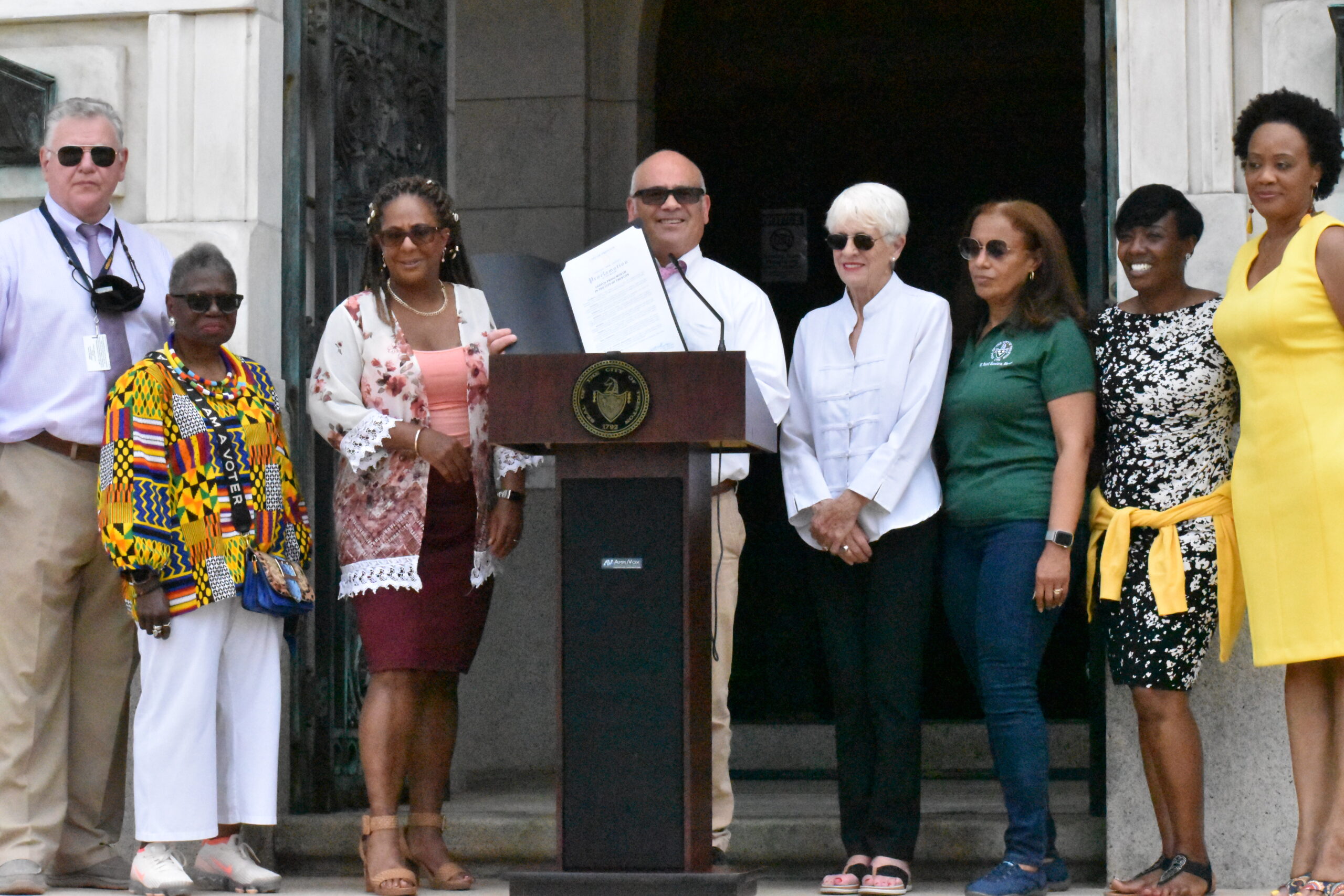 Mayor W. Reed Gusciora, on June 7, signed a proclamation recognizing June 2021 as LGBTQ+ Pride Month in the City of Trenton and raised a Pride Flag over City Hall.

On the front steps of City Hall at 1:00 p.m., a crowd was addressed by Mayor Gusciora; Kadja Manuel, the LGBTQ Committee Chair of the Trenton Branch NAACP and Executive Assistant and Community Organizer with Garden State Equality; Assemblywoman Verlina Reynolds-Jackson; and Councilwoman Marge Caldwell-Wilson.

Mayor Gusciora is the first openly LGBTQ+ individual to serve as the Mayor of the Capital City. During his time in the Assembly and now as Mayor, he has worked to protect the rights of LGBTQ+ residents in Trenton. The City held its first major Pride event, Trenton PrideFest, in 2019 and plans to do so again in 2021 after the 2020 event was cancelled due to the COVID-19 pandemic. In June 2020, Mayor Gusciora named Rick Kavin as the City’s first LGBTQ+ Liaison to ensure any issues relevant to the LGBTQ+ community are addressed in a respectful and timely manner.

“Every year, we recognize June as LGBTQ+ Pride Month to commemorate the Stonewall Riots of 1969. Those riots occurred in response to decades of abuse, oppression, and disrespect shown toward members of that community, and while Pride highlights the progress since, we must also acknowledge the challenges that the LGBTQ+ community continues to face,” said Mayor Gusciora. “Events like this here today help us ensure that our LGBTQ+ residents are recognized that they are given a voice, and that they are treated with the dignity and respect that they deserve. It is with great pleasure – and Pride – that I sign this Proclamation recognizing Pride Month here in the City of Trenton.”

Kadja Manuel is the LGBTQ Committee Chair of the Trenton Branch NAACP, which is just the second branch in the nation and the first in the state of New Jersey to have such a standing committee, and he also serves as the Branch’s 3rd Vice President and Chair of its Armed Services & Veterans Affairs Committee. Mr. Manuel is also the Executive Assistant and Community Organizer for Garden State Equality, New Jersey’s largest LGBTQ+ advocacy organization.

“Pride is an amazing thing, and it’s an amazing time, but it’s important to remember who and what we’re fighting for and how we got here,” said Manuel, “How great is it that we have the first openly gay mayor in Trenton who was also the first openly gay member of the state legislature to sign a proclamation supporting June as LGBTQ+ Pride Month? That’s important for two reasons.First, a proclamation is a declaration and acknowledgment of solidarity- it acknowledges hardships the LGBTQ community has faced. Secondly, it acknowledges how far we’ve come and also the long road ahead. So, as we gather for pride, a celebration that could not be possible without transwomen of color, we must remember that we gather not just to be visible and proud but to listen and hear.”

He continued, “That’s why I and fellow Executive Committee members advocating for the creation of an LGBTQ Committee within the Trenton Branch NAACP was necessary! Now Trenton is the only municipality in New Jersey where the local branch of the NAACP has an LGBTQ Committee. I hope other municipalities and branches follow Trenton’s lead.”

The Mayor’s Proclamation can be viewed here.