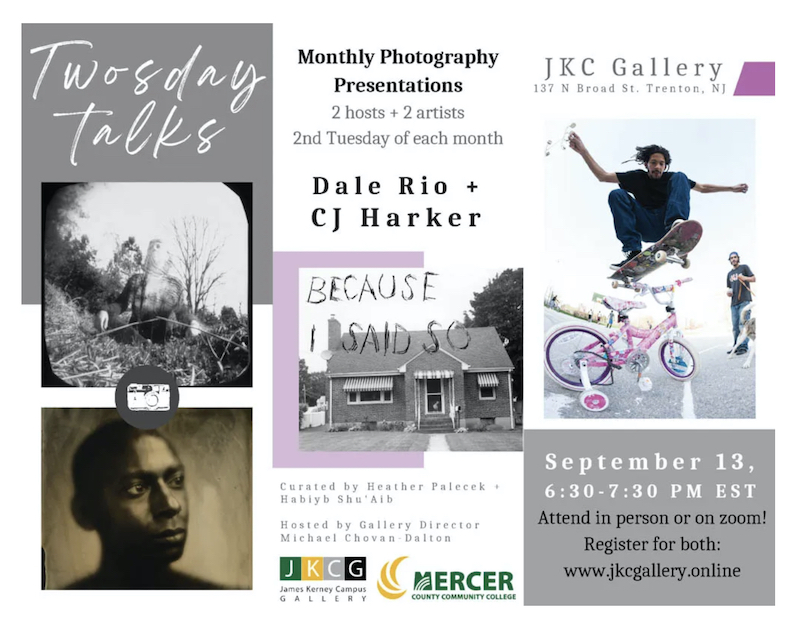 Mercer County Community College’s (MCCC’s) James Kerney Campus Gallery at 137 North Broad Street in Trenton has moved its monthly photography presentations to the first Tuesday of every month. With two hosts and two artists, the new series “Twosday Talks,” is a relaunch of the former “Third Thursdays” series. Curated by Heather Palecek and Habiyb Shu’Aib, the talks will kick off on September 13 at 6:30 p.m. with featured works and presentations by artists Dale Rio and CJ Harker.

“Twosday Talks” will be hosted by Professor Michael Chovan-Dalton, director of the JKC Gallery, and will take place live and on the Zoom conferencing platform. All are invited to register at jkcgallery.online.

Dale Rio is a photographic artist whose work explores issues such as mortality, human constructs and our relationship with the natural world. Using film and historic photographic processes, Dale employs “straight” photography to document the world around her and also creates conceptual imagery in response to that world. Her work has been shown extensively in the United States as well as in England, Germany, and New Zealand/Aotearoa, and has been reproduced in countless publications. She has authored one book and co-authored a second.

Dale received a Bachelor of Arts in Studio Art and Russian Literature from Smith College and Master of Fine Arts in photography with a minor in printmaking from Pratt Institute. She has been awarded a Fulbright Travel Grant and the Miguel Vinciguerra Grant, received a Windgate Scholarship to study the Daguerreotype process, and attended residencies at Penland School of Craft, the Studios at Mass MoCA, and the Farmington Valley Arts Center.

Dale worked for nearly a decade as a master darkroom printer (both black and white and color), has taught workshops at various art and photo centers for well over a decade, served as editor-in-chief at Black Graves Media for six years, and has curated upwards of ten photography exhibitions.

Dale is co-founder of The Halide Project a non-profit dedicated to film and historic process photography, owner of Point A to Point B: analog explorations, a print publication featuring travel- and place-based analog work, and founder of Lux et Libera: women at the intersection of light and chemistry, an initiative seeking to recognize the leading role women play in film and alternative/historic processes and create more opportunities for them.

Largely nomadic, Dale has currently set up basecamp in the Northeastern U.S. where she works as a forensic photographer, having received an M.S. in Forensic Science from George Washington University. She worked previously as a crime scene and death investigator.

More about Dale Rio can be found at IG: https://www.instagram.com/dale.rio.photography/

CJ Harker is a portrait and documentary photographer from Trenton working in digital and traditional film formats as well as historic and alternative photographic processes. CJ is a Mercer County Community College and JKC Gallery alumnus and is back to talk about more of his work.

Prior to receiving his Bachelor of Fine Arts from The University of The Arts in Philadelphia, he spent a summer at Peters Valley Craft School as a Photography Studio Assistant. His work has been featured in several national publications and won a number of regional and national awards. He is currently freelancing and working as a staff photographer for Skate Jawn magazine, an international skateboard publication based in Philadelphia.

CJ Harker’s work generally revolves around people. His works consist of formal portraiture to action, editorial and environmental work. While people are his preferred subject, it is mainly the process that motivates Harker. Digital is sometimes a choice but his preferences lean toward traditional and historic processes such as film, tintype and other printmaking practices. Crafting an image from capture to print is what keeps Harker engaged with photography.

More about CJ Harker can be found at IG: https://www.instagram.com/damagednotions/

Chovan-Calton remarked, “Everyone at JKC Gallery is excited to launch the new “Twosday” series. We are pleased to welcome Dale Rio and CJ Harker, two very unique artists with styles all their own and distinctly differing perspectives.” For more information about registration and attending in person or online, please visit JKCGallery.online.