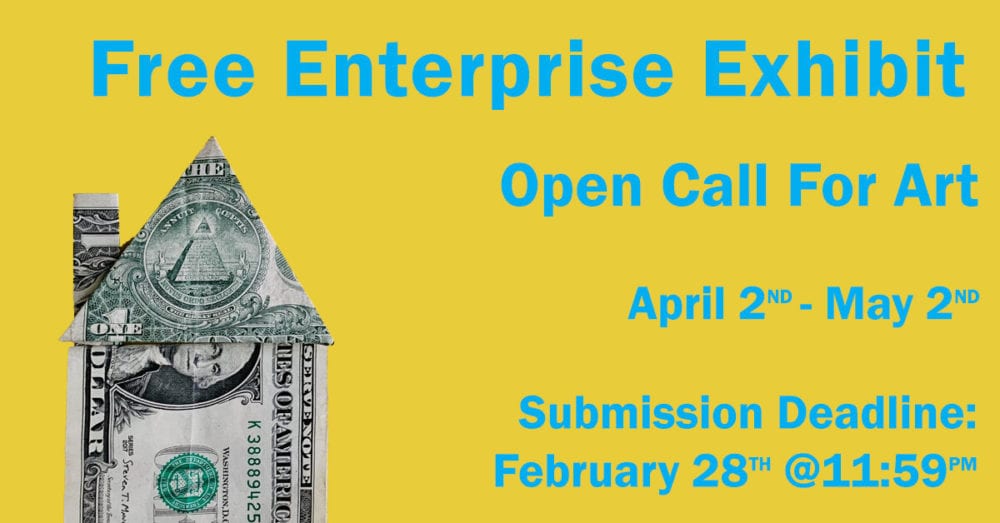 There are just two days left for artists to submit artwork to the BSB Gallery
that speaks to Capitalism, it’s effects, and the ever-growing challenge of the American Dream. Planned for an opening on April 2, the Free Enterprise show will create a discussion around the elusive tropes of America’s inter-workings, the irony of our optimism, and our innate desire for safety and prosperity. In a way, this exhibit promises to be more “American” than, well, apple pie. The deadline for submissions is Friday, February 28 at 5:00 p.m. Please bring your artwork to BSB Gallery at 143 East State Street, Trenton.

Aine Mickey, the curator of this interdisciplinary offering, notes that, “Capitalism is defined as an economic and political system in which a country’s trade and industry are controlled by private profit-oriented owners, rather than by the state. The United State’s labor-driven, happiness-pursuing culture created one of the world’s once most sought-after ethos’s, ‘The American Dream’. From streets paved in gold, to mega malls, or urban blight, we’re seeking work that describes these national themes.”

Áine Mickey is a Trenton-based artist living and working in the Capital city. She creates art professionally under the pseudonym Brass Rabbit and works in several mediums including “pure” photography, photo manipulation, digital collage, and sculpture/fabrication. Additionally, she is a poet, art advocate, and community organizer. Brass Rabbit’s work focuses on the study of economics, aiming to build bridges between those who profit from liberal capitalism and those whom it under pins. She has extensive knowledge of digital art and photographic practices and has a focus on conceptual artistic and material expression. She has worked closely with The Orchid Group, 501c(3) arts non-profit SAGE Coalition and is a founding member of OMN7 Arts Collective. She has taught classes and workshops with many large organizations, leading children’s and young adult programming, focused on understanding identity and morality through art.