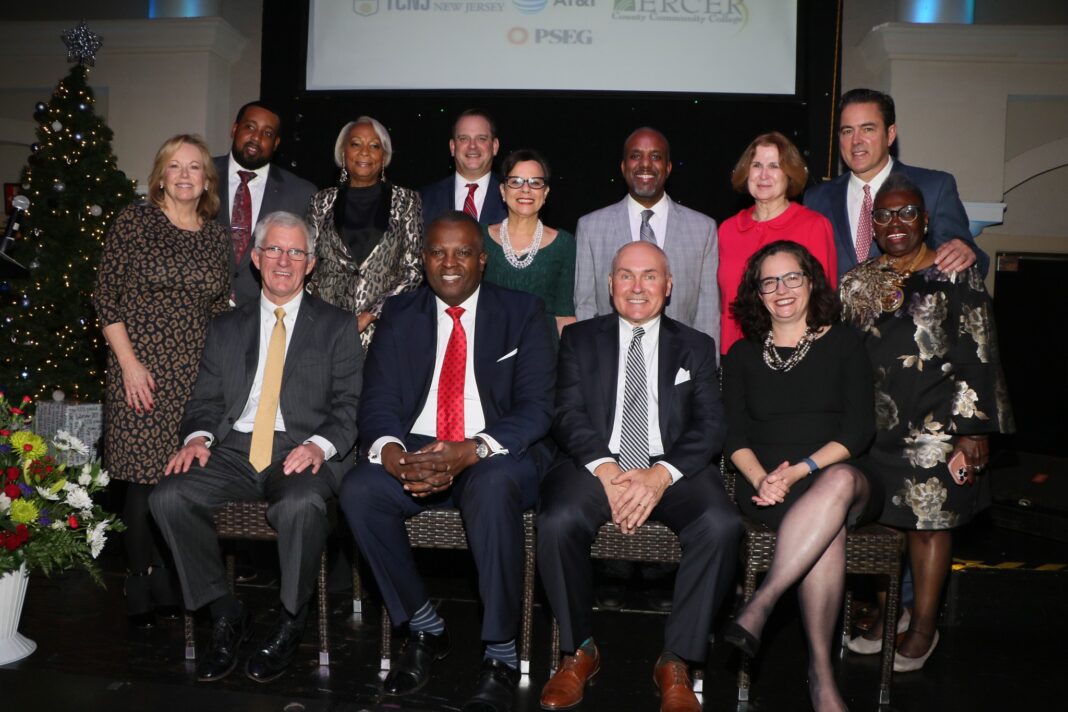 “When we pull together, we move things forward.” This was the motto of the late Caren Franzini and the ethos for this year’s Capital City Award Celebration.

On Monday, December 5th, regional leaders, elected officials, and community stakeholders gathered to celebrate the 5th Annual Caren Franzini Capital City Award Celebration. This year’s ceremony honored John Harmon, the Founder, President, and CEO of the African American Chamber of Commerce. Throughout his distinguished career, Harmon has represented and advocated for our 1.2 million African-American residents and over 88,000 black-owned businesses statewide. His efforts have helped to ensure that policy at the municipal, county, and federal level provides fairness, equity, and access to a level playing field in the marketplace. 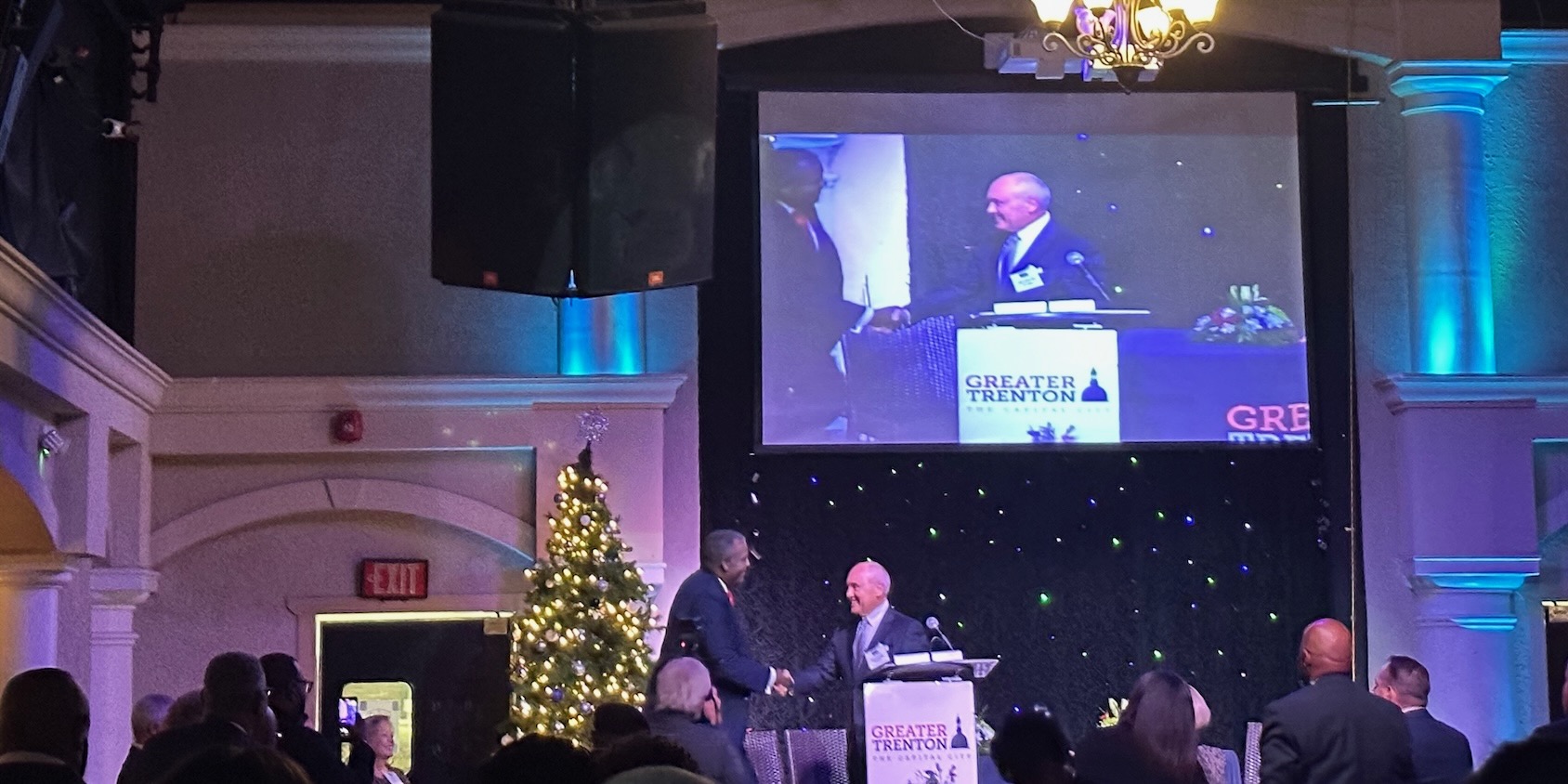 The evening’s festivities kicked off with a toast to celebrate this year’s honoree, as well as the incredible progress Trenton has made in recent years. As attendees mixed and mingled, it was evident that an evening of cocktails and conversations was enjoyed by all. The highlight of the evening was undoubtedly the presentation of the Capital City Award. Previous honorees include Drs. George and Pamela Pruitt, Anthony “Skip” Cimino, Congresswoman Bonnie Watson Coleman, and Anthony R. Coscia, Esq.

The presentation of the award got underway with a brief statement from Ramona Romero, an esteemed member of the Greater Trenton’s Advisory Committee, Vice President and General Counsel of Princeton University, and Master of Ceremonies for the evening. Reflecting on the legacy of Caren Franzini, Romero noted “having served on Greater Trenton’s founding Board of Directors, I had the privilege to work with Caren soon after I arrived in the Princeton area to work for Princeton University. She impressed me as somebody exemplary and I just know that she would take special pride in how this organization has evolved.” 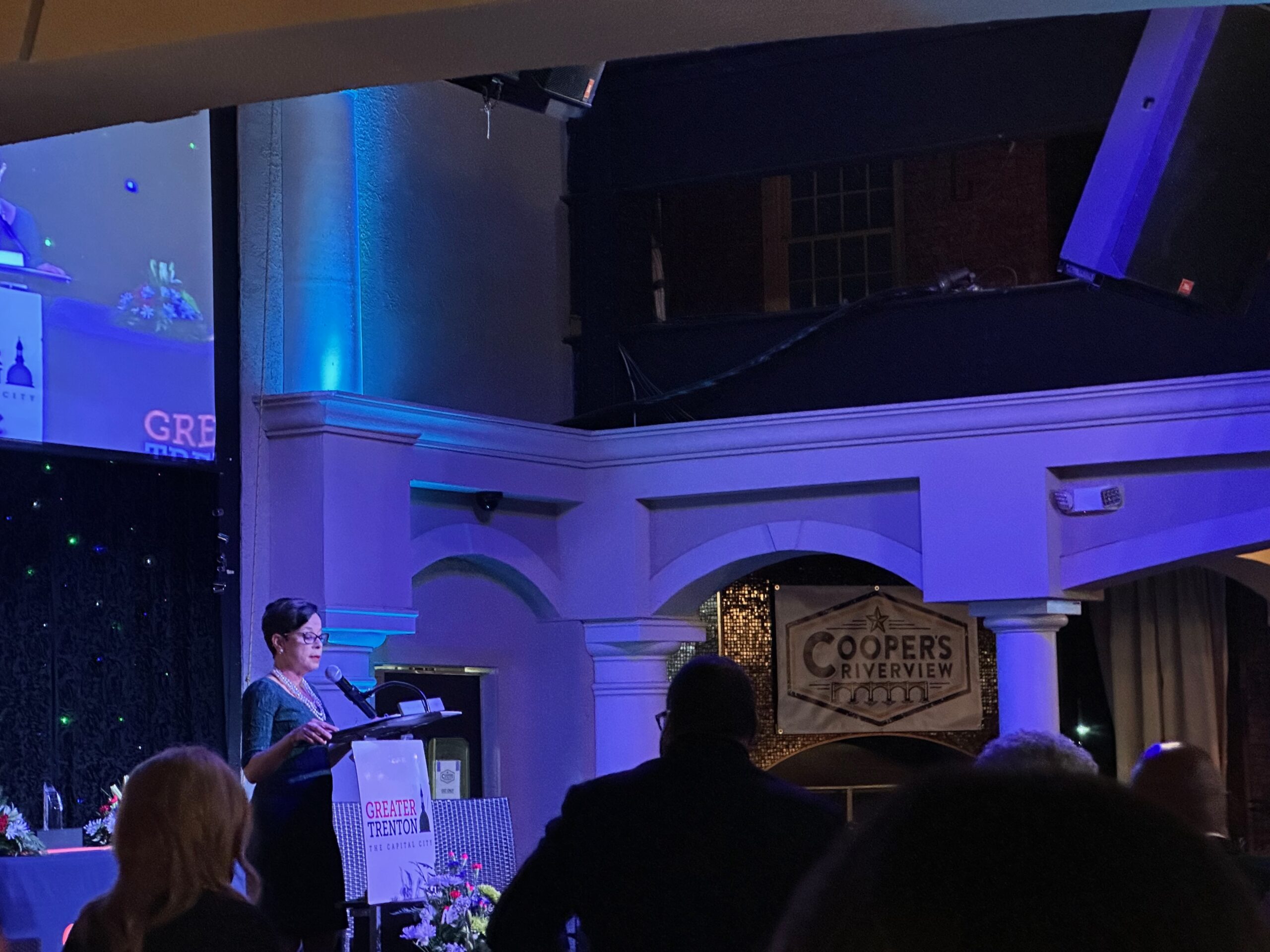 Guests were also able to enjoy a special message from Governor Phil Murphy, who remarked about the evening ahead. In his video message, Murphy noted “Greater Trenton is an ambassador for progress. Its work was founded on Caren’s favorite motto, ‘when we pull together, we move things forward. New Jersey benefits from its ability to attract private development and funding through its network of collaborative relationships to advance economic revitalization efforts in our Capital City.”

Continuing to discuss the man of the hour John Harmon, Murphy noted “presenting John [Harmon] with the Caren Franzini Capital Award becomes all the more special because he was born and raised in Trenton. His calling to ensure the policy at the municipal, county, and federal levels provides fairness, equity, and access to a level playing field in the marketplace, was also a calling strongly felt by the late Caren Franzini. She’ll always be remembered for her commitment and courage as a long-time leader of the NJEDA. So once again, congratulations John for this recognition that is so richly deserved – it is so fitting that Caren’s name will forever be linked with this city and its renewal.” 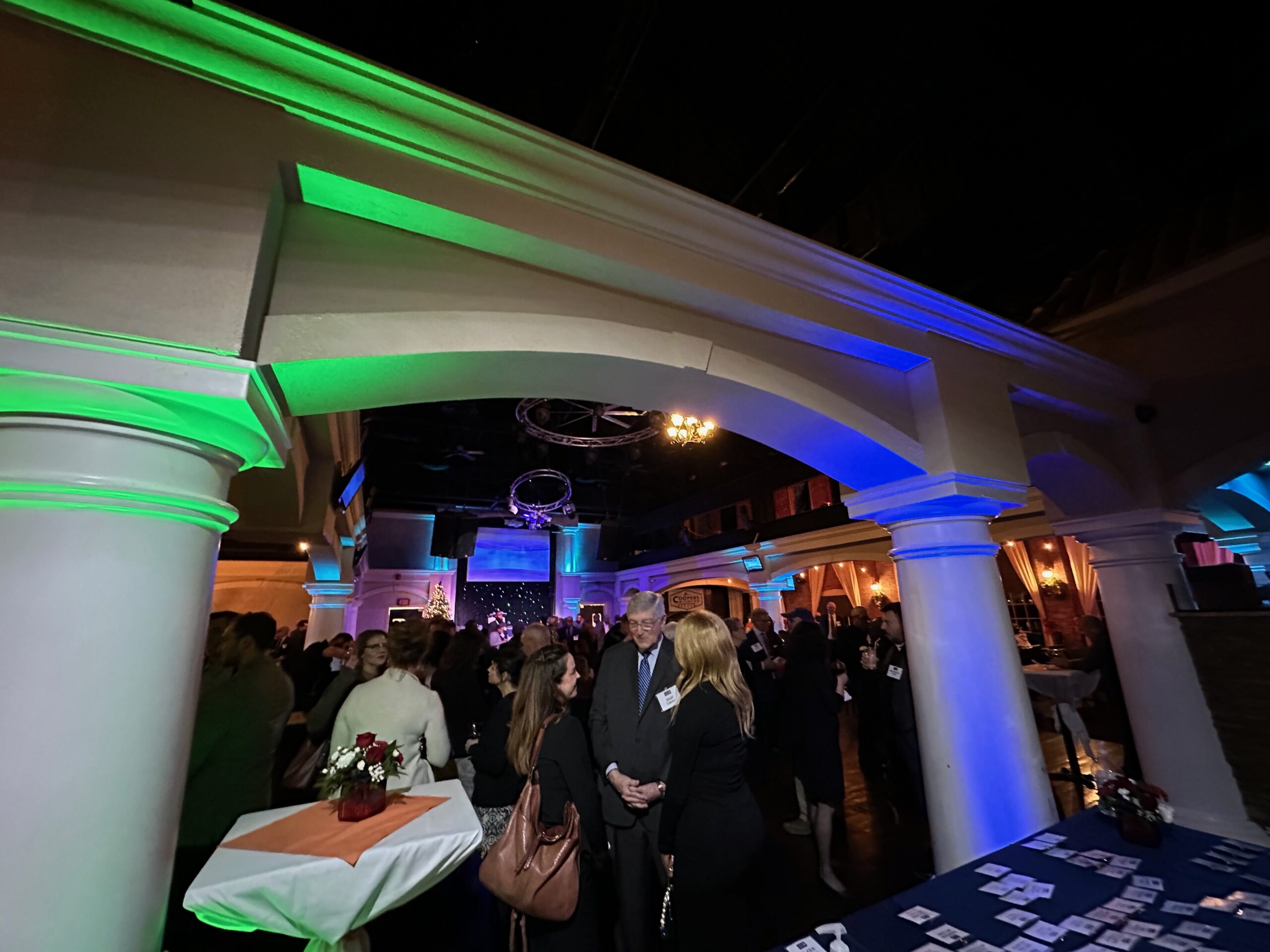 The newly re-elected Mayor of Trenton Reed Gusciora offered his reflections as well. As he was speaking on Trenton’s future, Gusciora noted “the next few years will be the most important in the city’s history. We want you to help us turn the tides, not only for your bottom line but for the next generation of Trentonians who live and work here.” As he continued to urge stakeholders to invest in our City’s prosperous future, Gusciora closed with “I am grateful for the support Greater Trenton has given us in our plans going forward, I am inspired by the many talented professionals in this room that have assisted us in advancing the ball. Each project is a signal of hope that attracts investment and attention to our beautiful Capital City.”

“This year’s impact video not only showcases the massive potential and enormous assets of our Capital City but also amplifies the tremendous progress that we’re seeing as a result of our work here at Greater Trenton, particularly in building partnerships and collaborations that move the city forward,” said Bryan Evans, Greater Trenton’s Senior Vice President. “We should all be very excited about the next chapter of Trenton’s economic development trajectory.”

“How fortunate were so many of us, like me, to have personally known and worked with Caren Franzini,” said Mike Van Wagner, Event Co-Chair, and retired NJM Insurance Group executive. “Not only is her work with the New Jersey Economic Development Authority considered legendary, but she was a friend and mentor to me, and so many.”

As the presentation of the award grew nearer, guests were privileged to hear from Caren Franzini’s children, Sam and Anna. In his speech, Sam noted “our family is truly honored to help introduce this evening’s Capital City Award recipient. One of the biggest lessons my mom taught me and my sisters was one of Greater Trenton’s guiding principles, the importance of community. I know not only has Mr. Harmon created a strong community here in Trenton and throughout the State of New Jersey, but we are also personal friends with Mr. Harmon in the community.”

The evening concluded with the long-awaited presentation of the Capital City Award to this year’s honoree, John Harmon. In his heartfelt remarks, Harmon noted “we can’t ask others to do without us doing. So we’re always going to do our part. As I stand before you tonight I am humbled, truly humbled, by the recognition. I have received many wondrous awards, and I’ve accepted them with great pride in honor of the over 1.2 million blacks and over 88,000 black business owners in the state, but tonight is different. So when I walked into the room, I felt it. It’s different, ladies and gentlemen.” As a proud Trentonian himself, Harmon appeared emotional reflecting on being honored in his hometown. He continued, “We could have set up the African American Chamber of Commerce headquarters anywhere – we could’ve set up shop anywhere in the state, but we chose Trenton. Trenton still makes, Trenton still transforms, Trenton is a differentiator.” As Harmon graciously concluded his remarks, the room exploded with applause and joy for this year’s honoree. 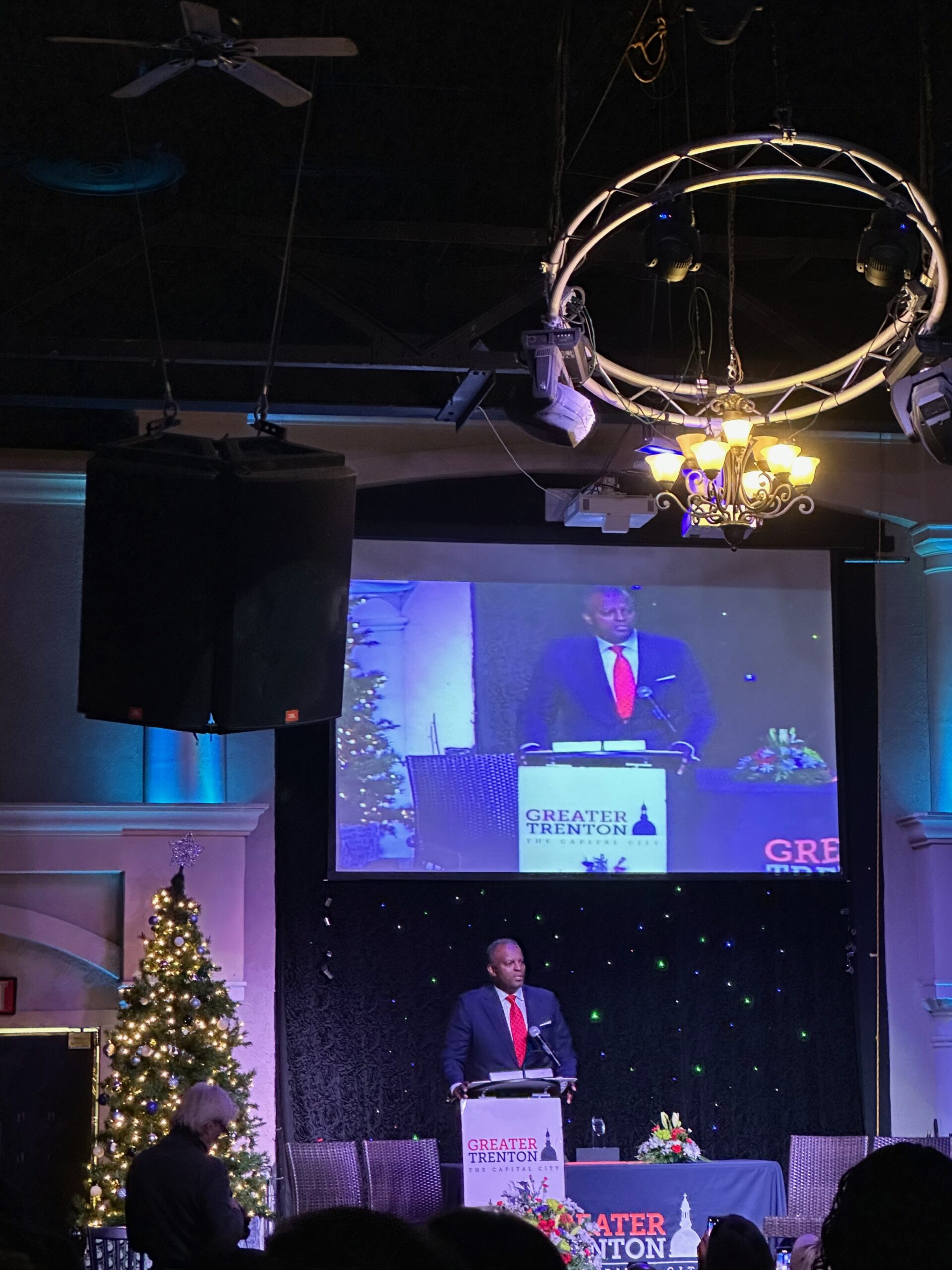 As the evening’s events came to a close, the room continued to buzz with excitement over the incredible things to come. As conversations finished and the room began to clear, guest after guest echoed how wonderful an evening it had been. Without a doubt, there wasn’t a soul in the room who didn’t leave feeling inspired and invigorated.