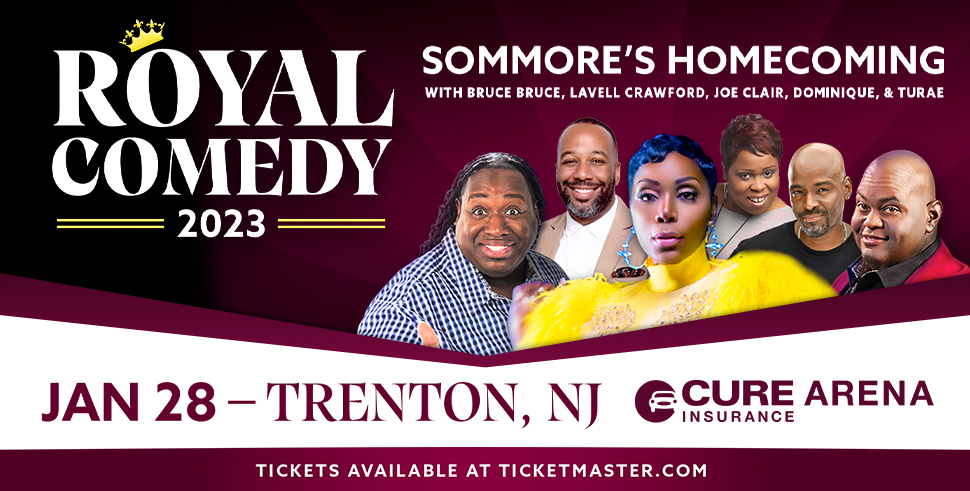 If you’re looking for an evening of side-splitting laughs, look no further than the Royal Comedy Tour at CURE Insurance Arena!

On January 28th, the Royal Comedy Tour will stop in Trenton for a performance you’re sure to remember. Get ready for Sommore’s Homecoming with various incredible acts, including Arnez J., Bruce Bruce, Sommore, Lavell Crawford, Don ‘DC’ Curry, and Ali Siddiq. Please note that the lineup is subject to change. Tickets can be purchased online here: Tickets – Royal Comedy Tour. Tickets are on sale to the public on Friday, December 16th at 10:00 am.

Arnez J. commands the stage with his one-of-a-kind delivery and side-splitting jokes. His most celebrated works include The Stuff, The Maintenance Man, and Up Against the 8 Ball.

Don ‘DC’ Curry is an acclaimed comedian and actor. Some of his most celebrated works include Next Friday and Friday After Next. In addition, Don boasts over 30 years of experience in making audiences smile.

Ali Siddiq is a stand-up comedian, public speaker, and writer. Siddiq was named 2013’s #1 Comic to Watch by Comedy Central and a finalist on NBC’s comedy show, Bring the Funny.

Bruce Bruce is a comedian, actor, and author known for his sharp improvisation skills and larger-than-life delivery. Bruce Bruce was the host of BET’s ComicView and has also been featured in various television shows and comedy specials.

Lavell Crawford is an American comedian and actor whose been quickly climbing the comedy ranks. Lavell is best known for his role as Huell Babineaux in Breaking Bad and Better Call Saul. Crawford was also a finalist on NBC’s Last Comic Standing, featured in his comedy special on Comedy Central, and featured in various other works.

Sommore is a Trenton native and outstanding performer who has been dubbed the “Queen of Comedy.” With equal parts class and sass, Sommore has earned her reputation as an all-star comedian. Sommore has been featured in various film, television, and comedy specials. She even received accolades from the Guinness Book of World Records for performing in front of a captivated audience of 50,000+ people.

You’re not going to want to miss this star-studded lineup!

Each year, the arena hosts comedians, singers, and a variety of other performers, bringing world-class entertainment to New Jersey’s Capital City. If you’re interested in learning more about this show and other great acts coming to town, you can visit their website here: CURE Insurance Arena – Shows. Any questions before the show may be directed to 609-656-3200 or CIA-Marketing@spectraxp.com. We hope you’re ready to laugh the night away!