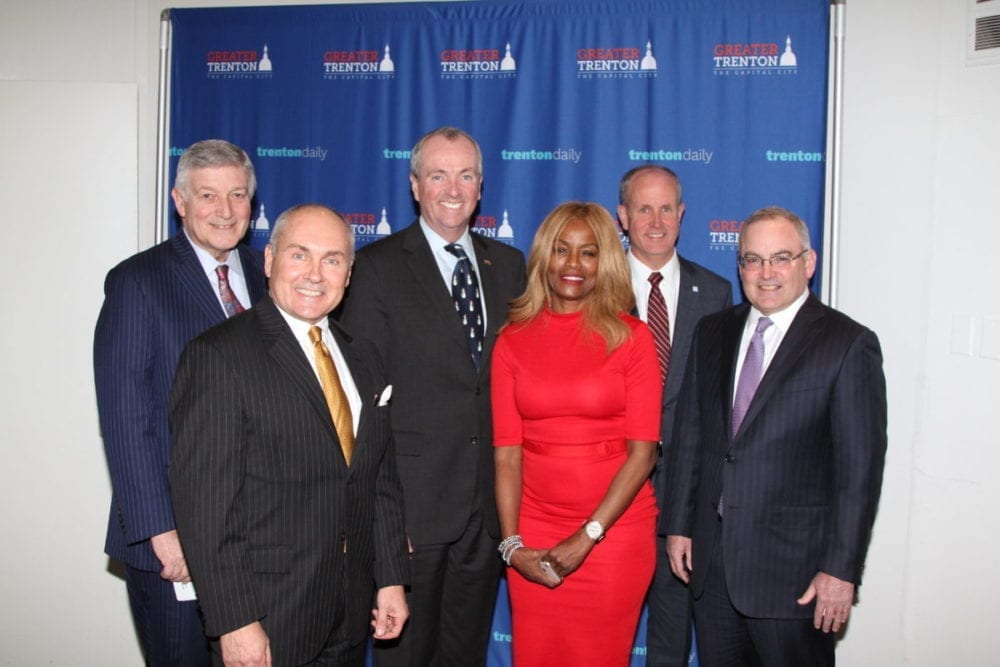 A portion of the money raised from this event will be invested in Trenton’s youth through a scholarship fund that will directly develop strong writing, public relations and communications skills right here in downtown Trenton. This will be achieved by inviting aspiring journalists at Trenton Central High School to work with TrentonDaily.

Some of the sweetest sounds in Trenton filled the State Museum as selections were rendered by seven young members of the Trenton Music Makers Orchestra, a music and social development program that has grown to include 110 young people from 2nd through 11th grades. Also filling the air with music was Barbara Trent, a major fixture in the Trenton area music scene for over five decades, who performed blues along with her son Scott Trent.

“I’m incredibly thrilled to be here particularly for the opportunity to celebrate the legacy and the spirit of my friend and yours, Caren Franzini,” said New Jersey Governor Phil Murphy, who thanked Anthony “Skip” Cimino, Chair of Greater Trenton, for his friendship, for the spirit of cooperation that he has shown over almost 11 months working together, and for his longstanding work on behalf of Mercer County and the great city of Trenton.

“To the entire Board of Greater Trenton, I take my hat off to you. To the Founding CEO, another good friend George Sowa, and staff of Greater Trenton, my hat is off to each of you for the work that you put in every day to create a stronger, brighter, and more sustainable future for Trenton and its residents — and thank you for bringing us all here together this evening.”

The Governor also recognized the newest and youngest member of the Greater Trenton team, Patrick Jones. “Patrick was born in Trenton, dedicated himself to service and projects in this city during his education at Rider University. He worked at the Mill Hill Child and Family Development Center prior to joining Greater Trenton, and he even moonlights during the summer as a bat boy for the Trenton Thunder,” said Governor Murphy. “Patrick could have taken his degree and gone elsewhere, but his career is taking flight right here — and he’s just one reason why I have such enormous optimism for Trenton.”

“Another reason for my optimism is another dear friend, Mayor Reed Gusciora,” added the Governor. “Not only does he have a passion for the job, but a vision for the future of Trenton— and the work he’s already doing with outstanding members of City Council is incredibly impressive. It’s an honor to be with you Mayor tonight and I look forward to doing great things and seeing great things done under your administration.”

Governor Murphy addressed and acknowledged members of his administration in attendance. “I have a particular soft spot for our Treasurer Liz Muoio, because she represented Trenton in the Assembly until we asked her to join our administration.”

Thanking all the sponsors who made the Caren Franzini Capital City Award Celebration possible, Governor Murphy gave a special shout out to the program’s presenting sponsor “NJM Insurance Group, who has proudly been a leader in our state’s business community for over a century and has proudly called greater Trenton region its home.” The Governor recognized NJM CEO Mitch Livingston and retired CEO Bernie Flynn for their commitment to the Capital City.

“Tony Coscia’s insights on countless issues from economic development to infrastructure have been invaluable to me among so many others,” added the Governor. “New Jersey is definitely better off for the decade he spent as Chairman of the New Jersey Economic Development Authority.”

“I believe deeply that this city can once again be a regional economic engine and we are committed to providing Reed, City Council and the business community, the tools to see that happen,” said Governor Murphy.

“Moving our business to Trenton wasn’t just built on emotion and hope,” said Kamal Bathla, CEO of Maestro Technologies. “It was built on research and data that positions Trenton as an attractive destination for tech.”

“We are so passionate about Trenton that if there was a song and dance, I would do it,” Bathla said with humorous conviction.

“Tony is the most appropriate person to be the inaugural award winner of the Caren Franzini Capital City Award,” said Bernie Flynn, Chair of Greater Trenton’s Advisory Committee. “He must have been a very good mentor because Caren was an extremely good mentor. She learned from Tony and she passed that down — it’s exponential.”

“But, the reason we’re all here tonight,” said Flynn is “Caren Franzini’s dedication and spirit.”

“It’s truly an honor to be here today to join you and the staff at Greater Trenton, who have done so much good work and who are really representing the beginning of what this city will see as getting its rightful place as part of this state’s economy and fabric,” said Coscia. “If the definition of really meaning something is showing up when you need to show up, then Skip Cimino is the guy who has been showing for as long as I have known where Trenton is.”

“Thank you very much on behalf of Greater Trenton for being here this evening to recognize the extraordinary and unselfish leadership of the late Caren Franzini,” said Cimino. “Caren Franzini not only imparted her love to John and her family, but she imparted her love to all of us in one form or another in her professional and personal life to ensure that the people of New Jersey had success and a better life for themselves, their families, their children, and their grandchildren.”

“When we decided to launch this celebration, I had a conversation with every single board member and each one of them stepped up and said they wanted this to be successful,” said Brenda Ross-Dulan, Principal at the Ross Dulan Group, LLC. “The time and energy that they put into the work of Greater Trenton is absolutely amazing and I could not be more thrilled and grateful to all of them.”

“Many thanks to our board, advisory committee, task forces and event committee under Brenda Ross-Dulan’s leadership for pulling this program together, said George Sowa, CEO of Greater Trenton. “Our staff at Greater Trenton does an outstanding job every day and I’m thankful for their efforts to date and look forward to the future as we move the city forward.”

“Caren was fully committed to turning the Capital City’s fortunes around and was a driving force behind Greater Trenton working alongside Bernie Flynn as founding co-chairs and Skip Cimino, who started as the organization’s current chair, said NJM Insurance Group CEO Mitch Livingston. “Being here to present the Caren Franzini Capital City Award to Tony Coscia is a fitting way to carry on Caren’s passion.”

“George actually puts the Capital in the Capital City,” said Mayor Gusciora. “It’s so important to have people like George Sowa, Bernie Flynn and Kamal Bathla who really want to step up to the plate and help us get this city moving.”

“I’m really happy with Governor Murphy, who’s been a partner since day one and really wants to invest in the Capital City,” added Gusciora, who was brief due to a scheduled flight to New Orleans where he will participate in The New York Times’ Cities for Tomorrow conference tackling urban revitalization with experts across the County. “I look forward to bringing back some ideas and more energy so that we get this Capital City moving.”

“The major reason for why this means so much to me is because the award has Caren Franzini’s name on it,” said Coscia. “The fact that this City meant a lot to Caren means that it’s important, and should be important to all of us.”