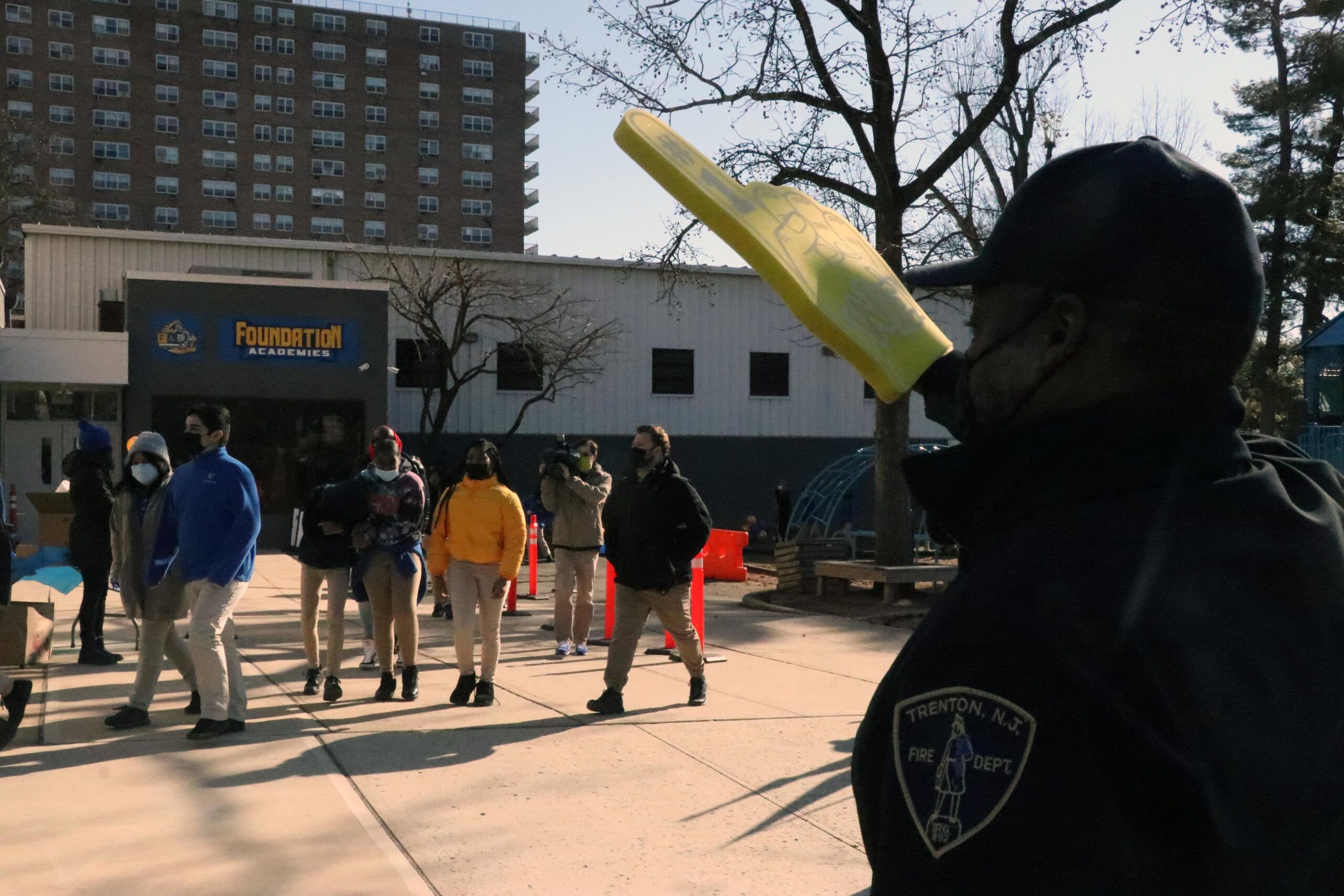 In the freezing weather on Wednesday, January 26, where temperatures in Trenton didn’t rise above 30 degrees, a group of men braved against the cold. They were armed with “you got this” posters, noisemakers, and inspirational music as the men cheered on high school students who enter the Foundation Academy, on 22 Grand Street, to celebrate their 100th day of school.

As part of this effort, Foundation Academies was looking for 100 positive male role models from the community including fathers, leaders, servicemen, artists, and beyond, to cheer students on as they entered Foundation Academies’ school buildings on their 100th day.

“For the first time this year, we partnered with Foundation Academy as a co-sponsor of their annual 100 Men Welcome event on January 26th…..one of the coldest days so far,” said Karen Andrade-Mims, Executive Director of the Father Center of New Jersey. “Our collaboration with Foundation Academy will only continue to grow from here.”

“Originally, we were doing classroom activities for the primary school students,” said Eric Bullock, leader of student culture at Foundation Academy. “We would count out 100 Cheerios and put them on a string, and that was pretty much the biggest part of it. But I sat down with my principal Natasha Cooper and we wanted to make it bigger and better.”

They put their heads together and decided the best way to get students motivated for the rest of the school year was to assemble young men, fathers and grandfathers from across the Trenton Community and have them cheer students as they entered the School.

“When you’re able to see the impact that this has on the students, it’s remarkable.  It goes from zero to 100. Whether you’re upset when you come into school or cold or tired, all that goes away when you’re motivated by 100 people you don’t know, cheering you on to do the very best you can do. Then, the sky’s the limit for you,” Bullock said.

The academy has been doing this for five years now, taking an online approach due to last year’s pandemic but never wavering. Sheria McRae, the incoming CEO of Foundation Academy, who has been working for the academy for 12 years, said that this is to help the kids feel seen and heard, to let them know that they aren’t alone in their struggles.

“They showed up every day… and they continue to show up… even now when it is one day we’re in school, the next day we could not be in school,” McRae said. “It’s a different way of learning, but they’ve adapted… That’s what events like today are all about, to show our students, we see you.  We see you, we appreciate you, and what you’re doing is commendable.”

Mayor Reed Gusciora came out in the morning to cheer on the high school students with the crowd of firefighters, teachers, parents, and fathers. “These are the next leaders of the city,” Mayor Gusciora said. “And this is important that they know that adults and other people stand behind them and want them to succeed.”

During the day, there were two different celebrations. The first one was in the morning to cheer on the high school students as they went to class.  In the afternoon, a parade was held for the elementary school and middle schools students as they walked out to a crowd of men cheering.

The group had community leaders like Fire Director Kenneth Douglas with a big “you are number one glove” and Bullock screaming “you are amazing” into a microphone with inspirational pop music and Trenton Thunder’s own Mascot: Boomer.

“Being neighbors, we love supporting the community,” Jeff Hurley, said Trenton Thunder General Manager. “These kids are the future of this area…so to motivate them…to get them through, we want to let them know that people are behind them and we know they’re going to do great things.”

Though the crowd wasn’t as big as Bullock hoped, he still feels that even if a part of the community showed up, it was more than enough to show the kids that the community supports them.

“It encourages them to continue to come to school every day, continue to work their hardest, and that they can achieve their dreams and people are supporting them,” Bullock said. “I think that’s the biggest part of what today brings is that they’re not in this fight by themselves.”