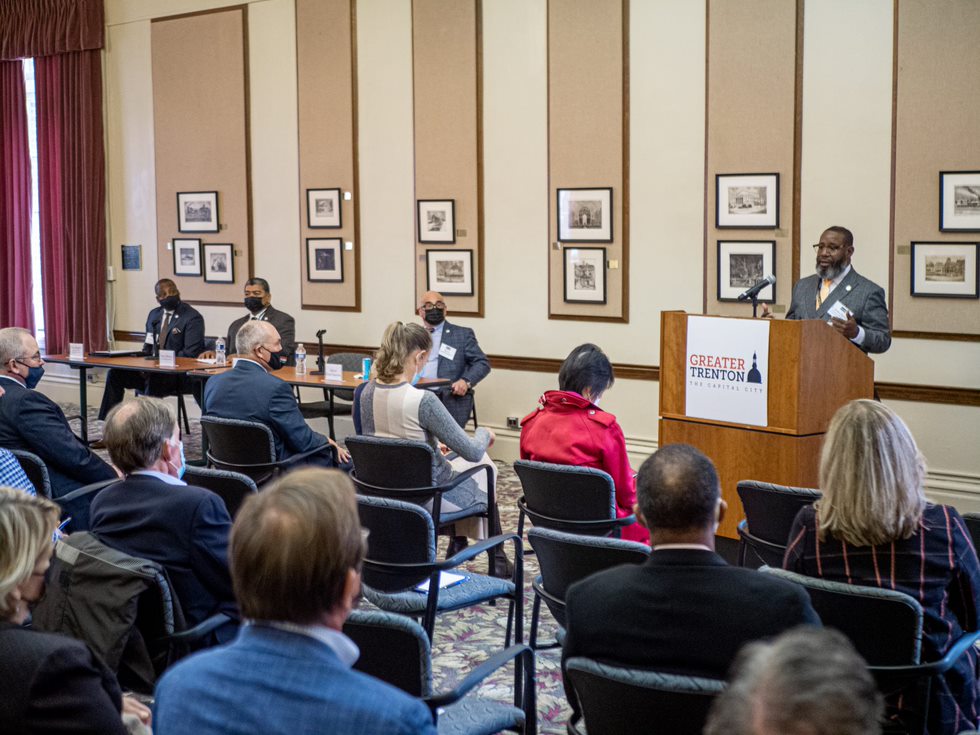 Business leaders across Trenton met at Thomas Edison State University on Wednesday morning for a Meet & Greet hosted by Greater Trenton. The purpose was to hear from Mayor Reed Gusciora, meet key City department heads and learn about plans to move the city forward.

After a warm welcome and introduction by Greater Trenton Chief Executive Officer George Sowa, each leader projected a shared perspective on how their work can improve as part of an integrated approach between departments.

Police Director Wilson discussed how the Trenton Police Department is working to not only police, but to be a part of the community. “We cannot arrest the problem away,” Director Wilson said. “When I got here, I was able to establish relationships with local and state organizations that had gone by the wayside.”

Director Wilson mentioned two initiatives that he is trying to get underway: an award winning explorers program that involves Trenton kids learning what it is like to work in a police station and Trenton Street Teams, which looks to identify, train, and deploy non-traditional leaders from within the community to serve as outreach workers.

“There are initiatives to take our youth and guide them away from a life of crime… to show them that the police are not the enemy but part of the community,” noted Police Director Wilson.

Director Daniels explained that Trenton is on the right path to creating better housing and establishing an area where the old outdated housing has to be demolished. “The Blight program, which is a multi-faceted program, is largely looking at knocking down some of these dilapidated homes, but more importantly rehabilitating the bones of some of these properties so that we can use this catalyst for rebuilding communities,” Director Daniels said.

He encouraged Trenton Residents to fill out the survey in an effort to help improve the city, narrow down the search for houses, and help redevelopment in areas that need it.

The directors and mayor shared a realistic optimistic viewpoint of the city. They explained that there is still a lot of work to be done, but they are up for the challenge.

“Trenton deserves this,” Fire director Kenneth Douglas said. “This is the state capital, it should be the beacon of public safety. “