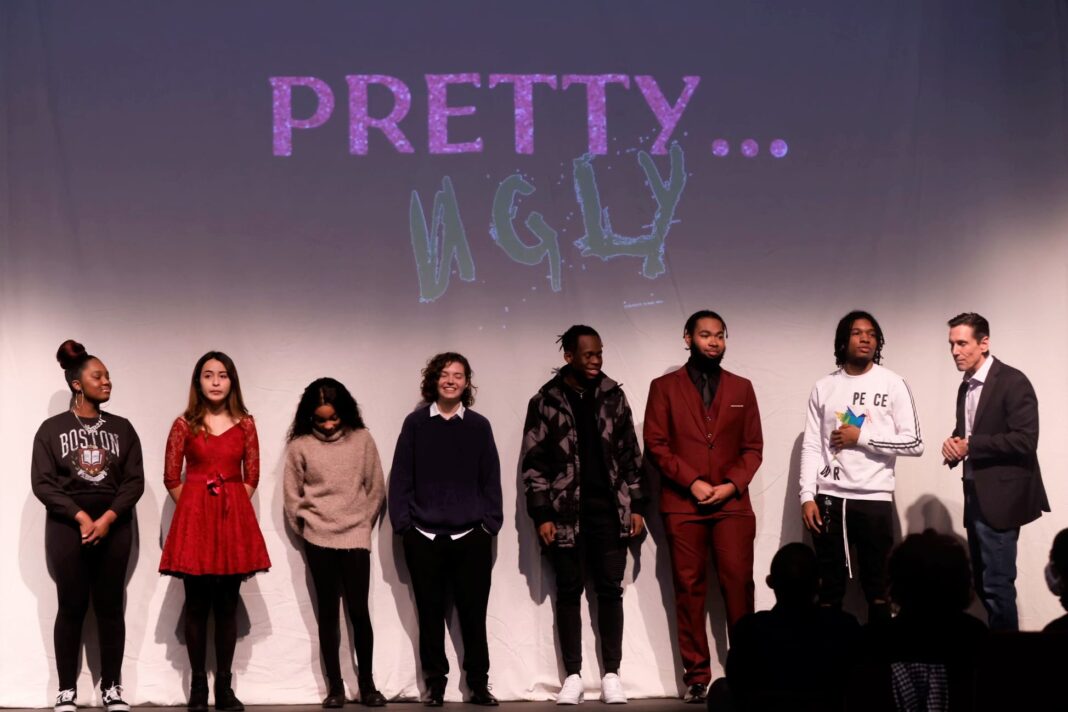 It took eight months, dozens of Zoom calls, 6 a.m. set calls, and students facetiming practically every night some weeks learning lines to create The 7-minute short horror film Pretty…Ugly. The show was written, acted, directed, and produced by students of The James R. Halsey Foundation of the Arts (JRH Foundation). Two weeks ago, they were able to showcase a year of hard work at a world premiere here in Trenton.

Joe Halsey, the CEO and Founder of the JRH Foundation explained that the group of kids he taught were some of the most determined and fearless students since the foundation’s beginning.

“They stuck it through. This by far is the hardest core, if that’s such a line, because…we only had three weeks to pull it together, and three or four weeks before they had a film. So for me, they’ll have that unique place in my heart that they did this whole thing online,” Halsey said.

Ideas for the short film started in early January of last year, but the scripting process was would only be in may and done mainly online without the help of Halsey.

Olivia Ames, a writer and a producer of the student film at the Halsey Foundation, explained that through scripting, she constantly had to get in the minds of others, creating characters that would pop to life on the screen.

“I’m not a mean person, but I had to think about what I would say to my grandmother that would get me in a lot of trouble,” Ames said as the scripting process continued their doubts among the students. Due to COVID-19 at the time, they doubt that they would actually be able to film Pretty…Ugly.

“We wrote the script online, and then when we first got together, we all realized this was going to happen. We got up (at the JRH Foundation) at six o’clock in the morning, we brought coffee, and we had to be there all day, and I was just like wow,” Ames said.

During the summer months, the student filmed on location. Pretty…Ugly casted students actors in leading roles like the two bullies and the witch curse them. Student Actress Jennifer Pinto-Castillo was one of the bullies. She would facetime her friends and practice in front of a mirror to get ready for the shoot.

“It was hard, and it was my first time too, so I felt awkward inside. We had to do a lot of retakes. It’s hard acting. It is hard talking and then showing your emotions through your body simultaneously. Sometimes, I would talk it, but I wouldn’t act it,” Pinto-Castillo said.

Below is the trailer that launched last month.

Throughout the process, the students were just happy to create a film with peers. Noelle Correa, the student Director, had joined the Halsey foundation after getting an email from her guidance counselor decided to join. She explained to Halsey what she was into behind-the-scenes and filming, and Halsey put her as the director.

“I was assigned director based on what I was most interested in, in filmmaking, which is like the cinematography, the editing. And Joe was like. You should be the director. So I was like, Oh, okay,” Correa said.

After filming, she and the crew began to put the story together in the fall of 2021. “We would go over edits and give our opinions and what we think should be changed and that sort of thing… maybe if like a certain shot went on too long, or if certain angles can be moved around.”

Though all felt the same relief when the premiere came, the crowd cheered at their movie. Questions were asked about the process and sighs of relief of how things went. Overall, the students all want to learn more about the film industry and are looking to become the following actresses, producers, and directors of the media industry.

“Well, having that experience of being on set and directing people using the camera, setting up shots, and all that stuff? It’s been nice to get experience and, like, learn from it. I guess. It’s made me more excited to go into it as a profession,” Correa said.