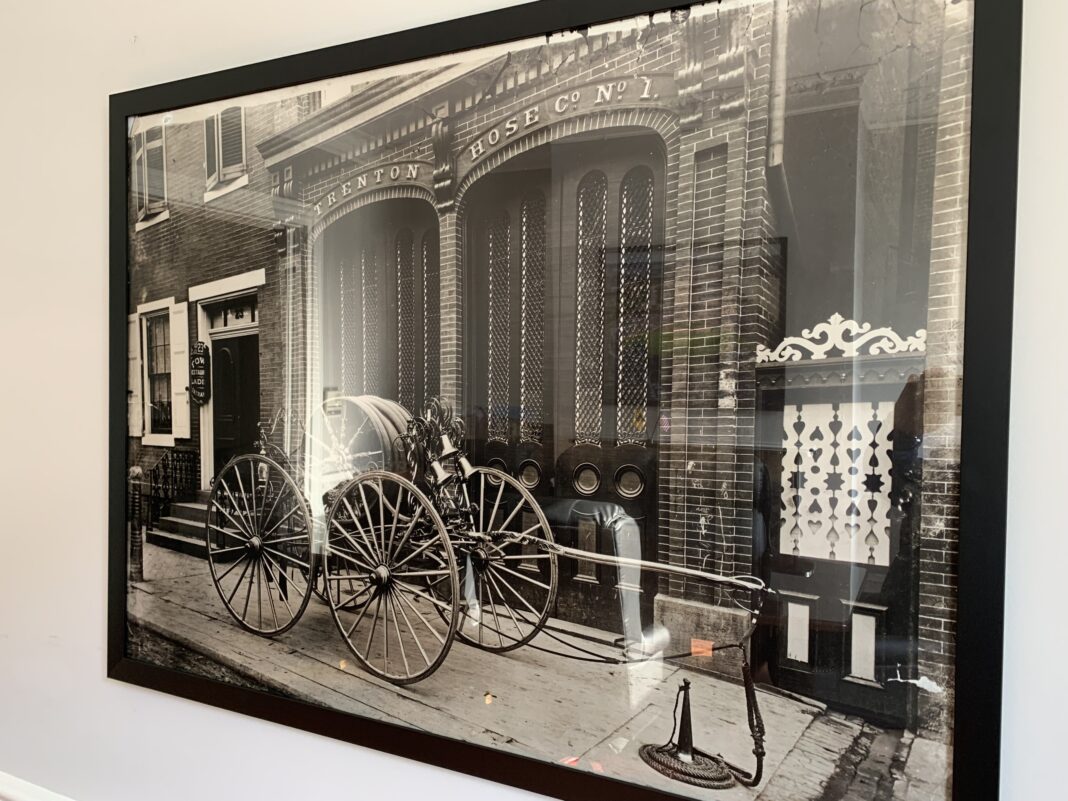 In return for Sowa’s kindness, Hunter gifted a little bit of history about a photo occupying a wall in Greater Trenton’s conference room. So, for today’s Historic Trenton’s Day in the Life, we are doing things differently as we reflect on a Trenton fire company in the 1800s called The Trenton Hose. With the help of “The Images of America: Trenton Firefighting” by Michael Ratcliffe, we dive into the history of The Trenton Hose Company.

First formed in 1839, the Trenton Hose Company purchased its equipment and established a small firehouse on North Warren Street opposite of the Third Presbyterian Church. The Company would stay there for about 11 years before relocating to Warren and Green (Broad) Street and moving in with the Union Fire Company.

The hose in the photo above was made in 1866. It was specifically designed to accommodate a new hook and ladder truck purchased by the Company. According to Ratcliffe, the Trenton Hose Company stayed with them for a little less than a decade and sold its shares moving a couple of blocks over on Hanover street after building their very own Fire Headquarters.

The Trenton Hose Company bought its first horse in 1875, making is safer to speed across the city. Before this, men would drag the hoses across the city, literally sprinting to make it on time to an emergency. This led to several injuries, often resulting in death.

One nonfatal injury, Ratcliffe explains, was on Christmas night in 1888. A fire had erupted in the city and Trenton Hose Company dashed through the roads swerving around corners left and right. Ahead of the Company was another fire department carriage: the Good Will’s Engine. The Trenton Hose Company swerved out of the way, attempting to dodge the carriage in front of them. The drivers were thrown off the carriage and landed on the ground with thuds and cracks.

Firefighting in Trenton during this time wasn’t all daring risks across the city. A common practice was for volunteers to make “grand excursions” to other cities for parades, fancy balls, elegant banquets, and lots of sightseeing. This seemed to be a common practice that crossed the United States. Over the years, serval different Trenton fire companies hosted firefighters from across the nation. To add, two days after receiving their new hose carriage, over 40 members took it on a train to Massachusetts to show it off.

The Trenton Hose Company remained in the city until they disbanded in 1892. Until then, the Company continued to fight fires across the city remaining true to a motto fixed on its wall: “when duty calls, ’tis our duty to obey.”