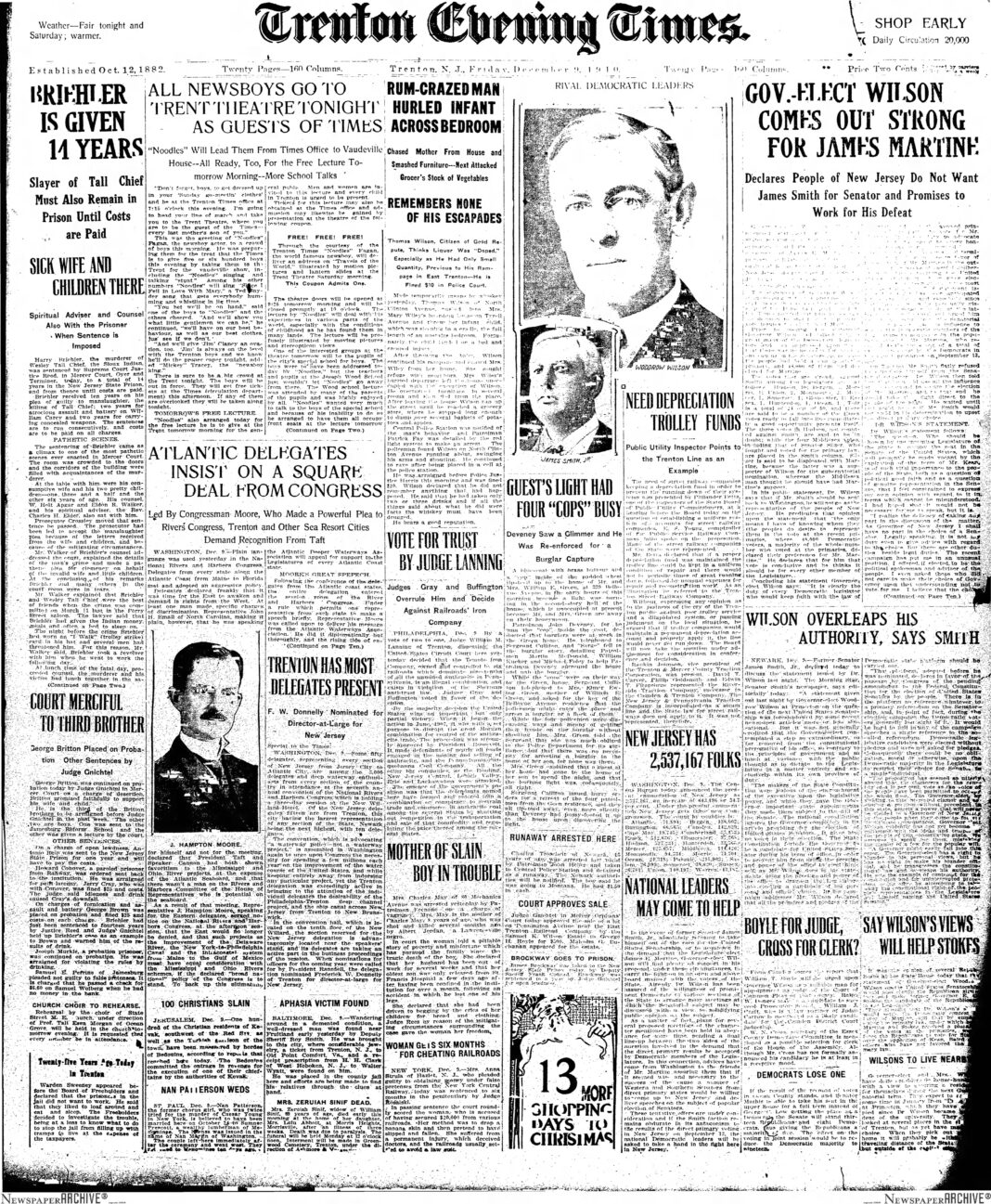 For Historic Trenton’s Day in the Life, we’re looking back through newspapers from the beginning and examining everyday problems, solutions, and needs during historic Trenton’s past. Today, we go back to Friday, December 9th, 1910 and the newsboys were off the Trenton Theatre as a treat from the times.

“Don’t forget boys, to get dressed up in your Saturday go-meeting clothes and be at the Trenton Times office at 7:15 this evening,” wrote the times as they quoted “Noodles” Fagan, a newsworthy actor. The workers were headed to see a vaudeville show including Noodles, making the lead story in the newspaper today over a hundred years ago. Reminiscent of Tom Hank’s epic movie News of the World, the world famous newsboy delivered an address in Trenton on “Travels of the World,” illustrated by motions picture and lantern slide at the Trenton Theatre.

F.W. Donnelly was nominated for Director-at-Large for New Jersey. He was among 3,000 delegates and deep-water enthusiasts from every part of the country to attend the seventh annual convention of the National Rivers and Harbors Congress. From New Jersey, 15 of the delegates were from Trenton, holding the largest amount from the state’s delegation. The convention was advocating a waterway policy urging congress to spend “a few million”  each year on the improvement of the waterways in America, including the D&R Canal, which runs through the heart of Trenton. At this point, the Census Bureau said New Jersey had a population of 2,537,167. Since then, the state has grown to have 8.882 million people within its borders.

The Shopping Center of Trenton on S. Broad Street had an unusual  “Opportunity to Secure Useful Gift things at Extraordinary Savings.” They were selling everything from Brooches to Hats to Taffeta Ribbons in black, white, and colors.

To end this historic day of stories heard from Trenton, a collection of stories humanizing the representatives. One section in the times told the story of James E Martine, candidate for the United States Senate, who talked to two boys about the apples they were eating before he had to run on to the train to Elizabeth. And, finally, the choir of State Street M.E. church was requesting that every member be in attendance for rehearsal. It was a typical news cycle on December 9th, 1910, introducing splashes of history in our beloved city of Trenton.