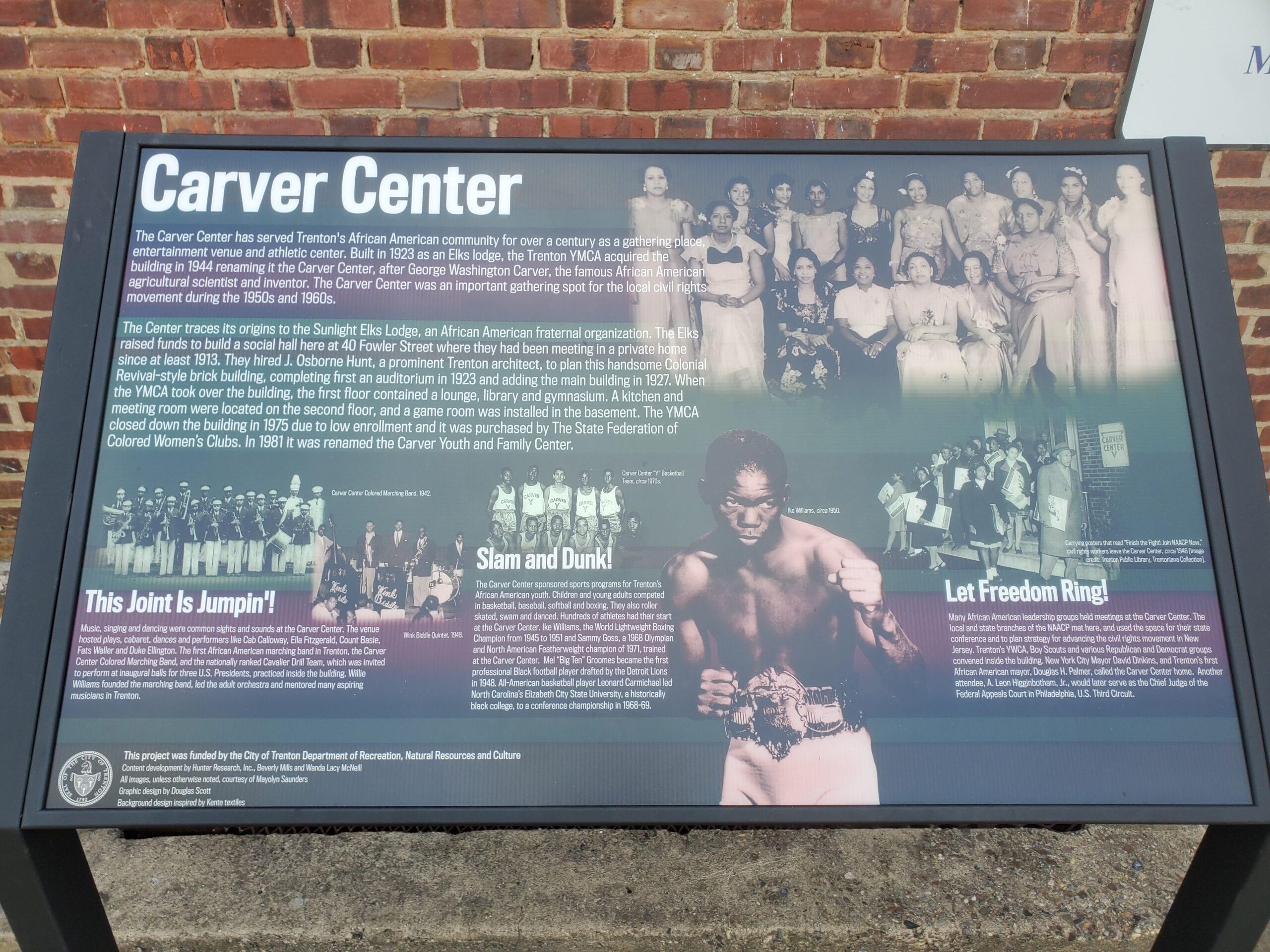 On Bellevue Avenue and Fowler Street sits two of Trenton’s historic properties, the Carver Center and The Higbee Street School. Both buildings have been under the National Register of Historic Places listing since 1995, but recently, the buildings have gotten new signage. For Historic Trenton’s Day in the Life, we’re looking back through newspapers from the beginning and examining everyday problems, solutions, and needs during historic Trenton’s past. Today, we examine the history of The Carver Center.

To begin, The Carver Center is a two-story, colonial revival-style brick building and was the prominent social gathering place for Trenton’s African American community from 1922 to 1975. It was constructed by the Sunlight Elks Lodge, a black fraternal organization, during the high point of the great migration.

Atalaya Armstrong is a community advocate who has been working on getting signage for Trenton’s historical landmarks. “So the sunlight Elks Lodge, this was their original meeting place. They then expanded it… it’s gorgeous. It’s huge. You can’t even tell how big this building is from the outside,” Armstrong said.

During the construction, America experienced one of the largest migrations of people in the United States history. “The Carver Center was originally built in 1915 because we had no spaces to congregate and just promote our culture and everything else we had going on,” Armstrong said. The great migration saw approximately six million black people move from the south to the rest of America’s states.

The Carver Center was located in the heart of Trenton’s African American Commerce and served as a meeting place for community organizations and hosted a wide range of programs and events as a recreational and entertainment center. The building hosted Music, singing, dancing, and performances from Cab Calloway, Ella Fitzgerald, Count Basie, Fats Waller, and Duke Ellington.

Mercer County Commissioner Samuel Frisby explained that this was one of the areas where black artists felt safe to perform. “That structure there was an incredible structure, it was a place where people felt safe. It was a place where the speakeasies had a nightlife. Where some of our icons would come to town, like Count Basie, and folks like that. That’s where they would end up they would end up at the only place they could go where they actually felt safe, and that people were here,” Commissioner Frisby said.

It was the central meeting place for the NAACP’s local and state branches. The walls of the Carver Center heard the plans for advancing the civil rights movement in New Jersey. “All kinds of things happened here parties. Heads of States came here, the states of NAACP, they convened here, they rallied here. It was just a cultural meeting place for African Americans in the City of Trenton,” Armstrong said.

In the 1960s, the Carver center experienced a decline in enrollment, and in 1975, The YMCA closed the branch. Though “as the only gathering place exclusively for black residents outside of churches, the Carver Center holds a special place in the City’s history. It has a high degree of integrity of location, design, setting, materials, workmanship, feeling, and association.”

Next week, Historic Trenton Day in The Life explores the Higbee Street School.