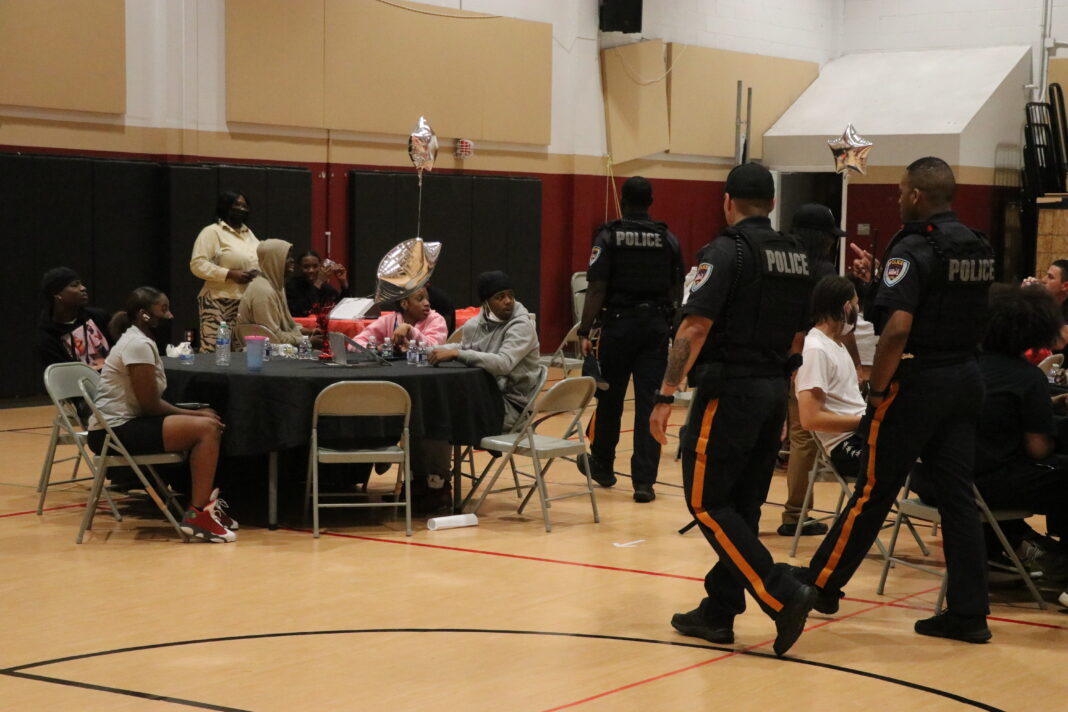 There are barriers that are put in place when a police officer or member of the justice system comes by in uniform. Sometimes it gets so quiet that a pin needle could drop and everyone in the room would be able to hear it. It doesn’t matter what the situation is; a uniform, for some, means trouble.

“That’s the stereotype; the minute you see a uniform, you already think, why are you here…what’s going on?” said Evette Reyes, Acting Principal of the Ninth Grade Academy.

A uniform is all it takes to change the everyday joe into a hero or a threat, a companion or an enemy, but take off that uniform, and that all goes away. Instead, they become a coach, a father or a mother, a husband or a wife, or most importantly, a friend.

Yazminelly Gonzalez, an educator at Trenton Ninth Grade Academy, set out to prove that fact to her students.

“I began coordinating this prior to COVID. And it was something that the Division of Criminal Justice Department had reached out to me about and asked me to coordinate a discussion panel with the youth,” said Gonzalez. “So we just wanted to do something a little different, not have people on stage talking to kids in the audience.”

Gonzalez decided to gather students and put them in a room with firefighters, police officers, and members of the prosecutor’s office and have them do teambuilding exercises.

The kicker is for the first half of the meeting, her students would have no idea that the men and women they worked with were law officers.

“So that was my idea because (Division of Criminal Justice Department) wanted to do a panel discussion and like I told them, I know our kids, they’re not going to be as receptive if they see you in uniform,” Gonzalez said.

The first half of the day was spent doing teambuilding activities like obstacle courses, gym games, and sport-like activities. At the lead was Teambuilding Guru Stacy Heading, founder of Heal the City.

“This has been a great experience getting young people to come up out of their comfort zone to do some critical thinking and work together as a team. And hopefully, the goal is with a debrief and questions that they’re able to guide them to use it out in the community. It’s just good for them to see adults from the community, taking time out to do some activities that promotes healthy relationships, promotes non-violent activities, and critical thinking,” Heading said.

At one point, students we divided into separate teams and had to face each other in a match. They started on the edge of the cafeteria and raced down to the edge where Joe Richardson, a Detective with the Mercer County Prosecutors Office, stood.

In front of him were numbered from 1 to 30 written down on individual sheets of paper and out of order. Students were each assigned a number that they had to find. The team who found and jumped on all the numbers the fastest time won each round.

Halfway through, students were left at tables as the officers and firefighters went to change. A couple of minutes later, they came in shocked students and sat down with the same teams they had been with during the teambuilding exercises.

“I was like dang, I didn’t know they were all cops before they came in…They are cool people, we worked together…We strategize as a team working together to win,” said an anonymous student at Ninth Grade Academy who attended the event.

The students sat down and ate food from The Big Easy of Trenton with the officers.
They asked questions like, “have you ever been scared to do your job or scared on the job?”, and “what are your efforts to help the youth of this city?” In attendance were members from Trenton Police Department, Division of Criminal Justice, Mercer County Prosecutors, New Jersey State Troopers, Trenton Fire Department, Trenton VFW, and Heal the City.

“I need them to see that they can relate to us,” Firefighter Eric Johnson said. “So this gives them an opportunity to see us as regular normal human beings in our regular clothes, and then we transform it to these superheroes…they get to see the human side of us, then they get to relate to us.”