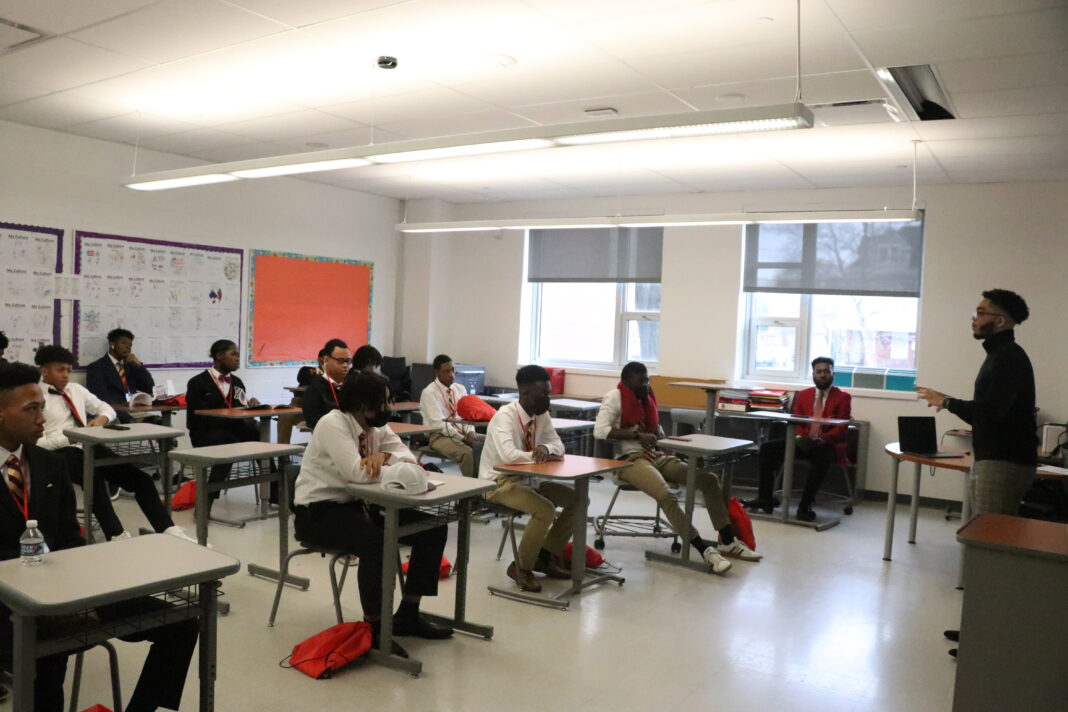 There was an air of determination and excitement as the over 200 high schoolers went from class to class during the Northeastern Province Kappa League Leadership Conference hosted at Trenton Central High School.

“Anytime when you can bring this many men of color, American men, and show them, people who are upstanding citizens, people who are family men, people are who these guys can look up to, it is gonna be a positive outcome no matter what,” said Ryan Harris, First Vice President, Co-chair of  the event.

This event is held once a year at participating schools inviting professionals from the business world to the filmmaking world to teach young black men in the Kappa Alpha Psi Fraternity.

There were guest speakers like Sensei Stanley Crump, 6th Degree Blackbelt in Uechi-Ryu Karate and a three-time Heavyweight World Champion in kumite (fighting); Alijandro Danois – author of “The Boys of Dunbar,” the story of the greatest high school basketball team ever, and “Five-Star: The Basketball Camp That Changed the Game;” Gene Bouie, strategic leadership, management and operations guru;  Gayle Hawkins, Financial advisor whose mission is to create financial empowerment and preservation of wealth through education within diverse communities and Marcus Guillory a Novelist, screenwriter and house music DJ/producer among many others that held the attention of the young men learning from them. Every student there had a mentor to guide them through the day and for them to ask questions. Lamont Repollet, Ed.D., President of Kean University was one of the guest speakers.

“I think every young man, man, and woman needs guidance…So my goal was to make sure that given imparts knowledge to our young members, young men, but more severely talked about, you know, the formula or key to success,” Repollet said.

Brian Taylor, President of the Trenton Kappa Foundation, explained that it was a mentoring opportunity for students to work with leaders in various industries.

The Fraternity Kappa Alpha Nu has had a long history of uniting African American men. “Kappa Alpha Nu began uniting college men of culture, patriotism, and honor in a Bond of fraternity. Kappa Alpha Psi is the 2nd oldest existing collegiate historically Black Greek Letter Fraternity,” according to the trentonalumnikappas.com. This conference is one of the ways they continue that legacy.

Ronald Jones, The Director for the Trenton Alumni Chapter and Trenton Central Alum, said that it is a pleasure to bring this event to Trenton, “(Trenton doesn’t) get the best publicity all the time… So it feels great to bring in something so positive back to Trenton, to bring something here positive on purpose, and to reflect and balance out negative energy that is being conveyed and illustrated in this are,” Jones said.

Jones explained that this event and others like it would help Trenton African American students succeed in whatever field they want to proceed in. “Self-actualization can’t happen without seeing….people who will look like you,  and who are positive. And you see that in abundance, we’re bringing in all these mentors, guest speakers, and this is a very rare event where you have this level of positivity.”