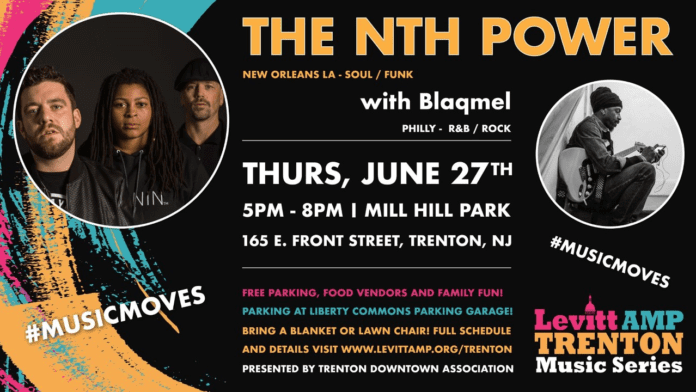 Cancel your Thursday evening plans and head over to Mill Hill Park for a spectacular time! The Levitt Amp Concert Series is back for it’s fifth consecutive year starting tonight!

The Levitt Amp Concert Series is a ten week concert series featuring numerous artists of different genres. The concert series is presented by the Trenton Downtown Association (TDA,) a non-profit organization that is dedicated to making the capital city a more competitive location for business owners and an engaging center for workers, residents, and visitors. Since 1986, TDA has offered programs that promote economic growth and investment in New Jersey’s capital city. The staff is involved in business recruitment and retention, public relations, advocacy, marketing support, referrals, and partnership development and job creation. TDA also hosts events like the Capital City Farmers Market, and Patriots Week to attract visitors to experience the current growth happening in Downtown Trenton. Through maintenance of a clean and safe commercial district, support for the arts and cultural heritage, promotion and public policy planning, Trenton Downtown Association is leading the revitalization of the City of Trenton.

The ten week concert series will take place every Thursday from June 27th to September 5th from 5 p.m. to 8 p.m. at Historic Mill Park at 165 East Front Street Trenton, NJ. This free concert series takes place outdoors and attendees are asked to bring blankets and/or lawn chairs for their comfort. Event is rain or shine; rain locations will announced when necessary. Free parking will be offered by the Trenton Parking Authority in the Liberty Commons Parking garage located at 16 E. Front Street, just a few hundred feet from Mill Hill Park.

The concert series is made possible by The Mortimer & Mimi Levitt Foundation, a national funder of creative placemaking that empowers towns and cities across America to transform underused public spaces into thriving destinations through the power of free, live music. In 2019, more than 550 free Levitt concerts will take place in 26 towns and cities, all featuring a rich array of music genres and high-caliber talent. Last December, Trenton was named one of 18 small to mid-sized towns and cities across America to win a Levitt AMP Grant Award of $25K in matching funds to present a free concert series at Mill Hill Park in 2019. The Levitt Foundation’s AMP goals are to: amplify community pride and a city’s unique character, enrich lives through the power of free, live music, and illustrate the importance of vibrant public places.

Founding Sponsors New Jersey Manufacturers Insurance Co. and the NJ State Council on the Arts are partners with TDA in presenting the music series for the fifth year. As part of its efforts to engage the community, TDA also recognizes local arts and a cultural organization at each concert for their contributions in support of the city’s efforts in making Trenton a great place to live, work and visit.

Tom Gilmour, Executive Director of Trenton Downtown Association expressed that setting up is a lot of work specially on the first week and that when he first started doing this event he wanted to get everyone to come out. A lot of people are working hard to make these concerts happen. William Stanback, the TDA Board Chair said, “The Trenton Area music lovers have demonstrated their appreciation for music in our outdoor venues. Like the other cities receiving the Levitt AMP Trenton Music Series Grant, we believe Trenton is deserving of this continuing opportunity to bring high quality concerts – free of charge – to our proud and loyal community.”

To register to volunteer go to, https://concerts.levittamp.org/volunteer_trenton