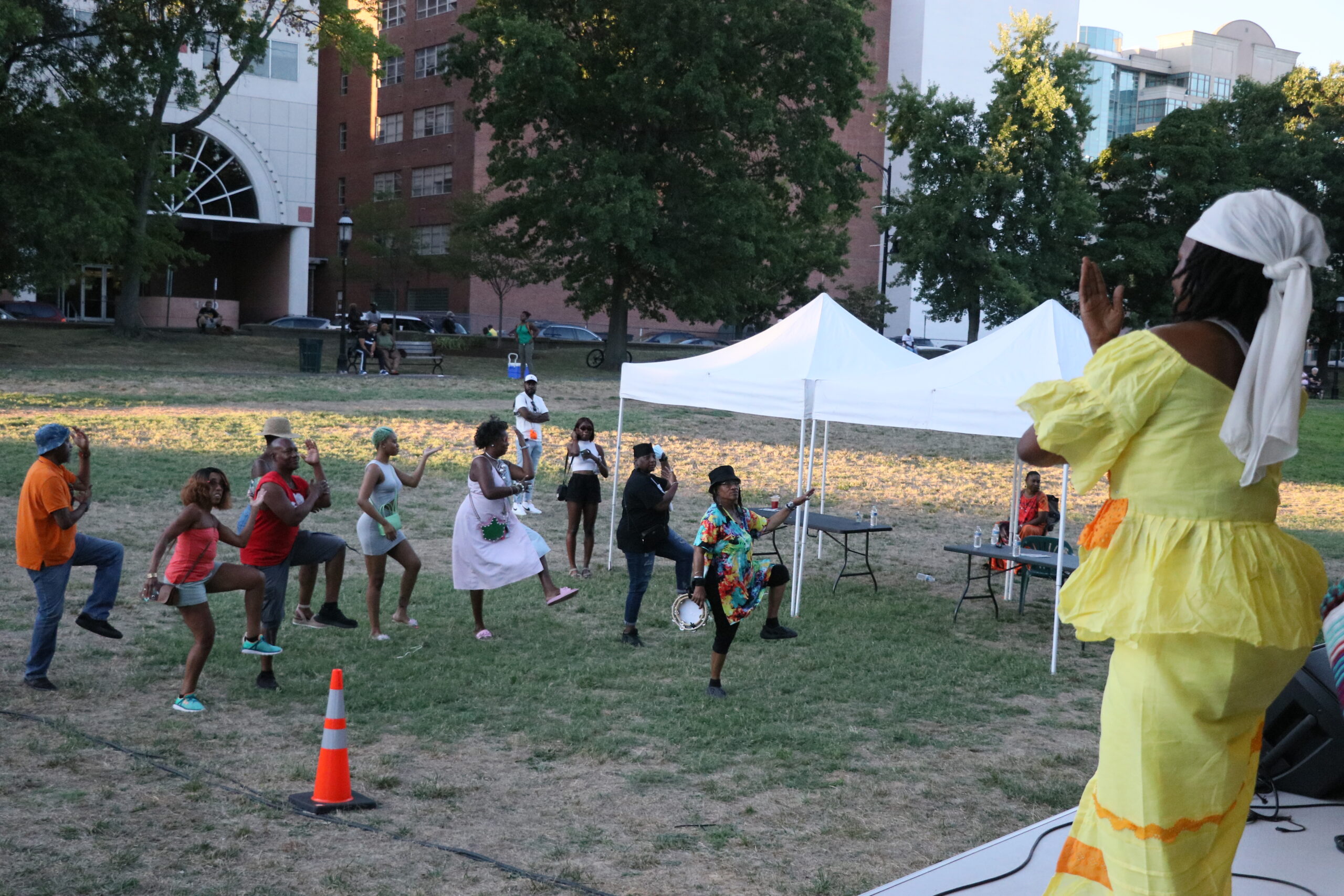 “We have amazing bands coming through right now. We have the showcase of Malidelphia coming from Philadelphia, PA,” said Kevin Francois, known as comedian DeeKay, the host of the night. “It’s composed to put together for an amazing sound, as well as other jazz groups coming up.”

Malidelphia got the first and third act, while Trenton artist Markel Carey got the inbetweener. Carey’s style of music was hip hop and rap as he performed with two other artists at his side.

“My favorite genre will be more so hop R&B,” Carey said. He explained that he has been in the industry for 10 years, working other jobs in the city of Trenton. He had this to offer to young Trenton artists.

“Do not stop chasing the dream; keep doing it… You never know, that one day you stop could be the day somebody paid attention to you and could change your life.”

It is common to see lawn chairs in the shade and vendors set up shop along the road. Vendors were continuing the day after vending the “Seat at the Table” event sponsored by Isles.

Valeriya Kolesnikva, an employee of her 8-year-old son’s business Daniels Lemonade Stand, stood as she sold lemonade at 2 dollars a cup with chips on the side.

“(Daniel) came up with this idea to sell lemonade, and it’s our second lemonade stand. I help him to make it at home.” Kolesnikova describes the crowd. “It was pretty good. Awesome. People are so supportive. Once they hear that my son is on the business, they come and try to support him.”

As the music played, Isles continued to host a small play area for kids. Isle’s T-Recs truck was set up with lawn games that included stilts, rainbow ribbon twirlers, and a bouncy house. Gulu Brewer, is Isles’ community and residents outreach coordinator.

“It’s a great opportunity for us to be here because we get to engage with the kids, play with them, have a good time, and the parents get to enjoy the show and not worry as much about what the kids are getting into,” Brewer said

The addition of Isles was welcome as Levitt Amp hits the halfway point with momentum. Latarsha Burke, the Executive Director of the African American Culture Collaborative at Mercer County, explained that they continually provide fun family entertainment.

“We have to remain consistent. The First Fridays downtown Trenton started with ten people on a block. Now we need two blocks to fulfill the need of the people,” Burke said.

She continued explaining that although the crowds have been small, they have grown.

“I think Saturdays are a new thing. And for anything that’s brand new in the city, the people have to get used to it. And I’m happy with the progress thus far. I’m also happy with the diversity of the content offered to the people,” Burke said.

This week’s headline performer was Malidelphia, a folkloric performance-art ensemble of African and African American artists, singers, dancers, and folklorists.

The name “Malidelphia” refers to the connection between Malian and Philadelphian cultural art forms such as Jazz, Blues, Afropop, Hip-Hop, and traditional and contemporary percussion. Ira Bond, leader of Malidelphia, explained that their music is traditional with modern touches.

“We do traditional West African music from Mali, but we also add a Philadelphia flavor to it, so we add a little blues, a little funk inside of it,” Bond said.

According to the TDA, the project showcases the underlying similarities in the artistic expression of people of African descent. Using percussive instruments, vocals, and chants, they have created a montage of pieces from professional performing artists that shows unique urban and traditional sounds and movements.

“So that music comes specifically from Mali West Africa, and Mali is like the birthplace of the blues,” Bond said. “You hear a lot of blues in the music like the guitar, the bass sound, but then you also hear that percussive sound, you know, that comes inside of it as well.”

The highlight of the night was teaching traditional mali dances. Helen Walker is a Trenton resident who learned it alongside her daughter. “It was invigorating. The instruction was easy to follow. It was good to be able to do African dance and connect with our culture,” Walker said. Her daughter, Brielle Walker, adds, “my mom dragged me to go dance. It was fun…I took African dance for a few years, so it wasn’t hard to pick up, but it was fun.”

“Our community needs an outlet; we need a place to be able to unwind, reset and enjoy each other’s company without the worry of confusion, friction, or violence,” Helen said. “Just a place to unwind is important.”

For Bond, that was exactly what he was looking for. “The main emotion is like happiness, love, togetherness, inclusivity, things like that,” Bond said. “We’re happy to be here, happy to be able to spread cultural love here in the Trenton area,” Bond said.

The Levitt AMP Trenton Music Series is supported in part by the Mortimer & Mimi Levitt Foundation, which partners with towns and cities across America to activate underused public spaces through the power of free live music, creating welcoming, inclusive destinations. Local presenting sponsors include NJM Insurance Company, along with the support of the City of Trenton, the Mercer County Park Commission, Greater Trenton and TrentonDaily.