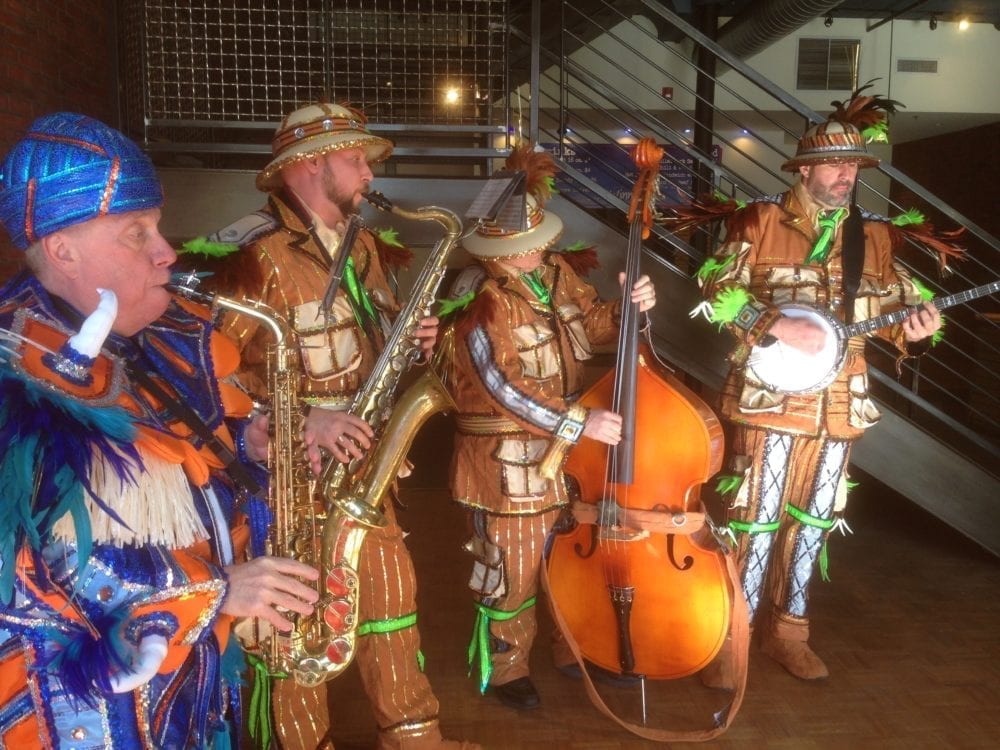 You’ll want to march right on over to the Library to see an entertaining and artful presentation of 29 photographs of one of the oldest folk-art events in the United States: the annual Mummers Parade in Philadelphia. Displayed in the Mezzanine Gallery, the 2-man show opens at 9:00 a.m. this Saturday (January 11) and will be available until February 28th. As a special event, there will be a Reception with the photographers on next Saturday, January 18, from 3:00 p.m. to 4:30 p.m.

The Exhibit is a presentation of the Trenton Artists Workshop Association (TAWA) and consists of the work of two long-time area photographers, Bryan Grigsby and Dan Aubrey. They both capture the immediacy and the energy of the famous New Year’s Day Mummers Parade which reflects ancient European customs and traditions that sported exaggerated mime creations.

The “X 2” in the exhibit title stands for the two Central New Jersey journalists who are united by their interest in observing and photographing the Mummers, named Bryan Grigsby and Dan Aubrey.

Grigsby is a retired newspaper photographer who spent 40 years at various news publications, notably as a photo editor at the Philadelphia Inquirer, where he spent the last 30 years of his career. A graduate of the University of Florida, he got his start in photography while covering the war in South Vietnam as an Army photographer.

Grigsby discovered the Mummers Parade in the early to mid-1980s and says, “It was love at first sight. I thought this event was the most bizarre thing I had ever seen, and I was determined to bring an outsider’s point of view to capturing the participants. I almost never photographed the actual parade, choosing instead to focus on the staging areas deep in South Philly, where I felt like I was seeing the primal gut of the beast.”

Aubrey is the arts editor of U.S. 1 Newspaper and editor of the monthly Trenton Downtowner. A Philadelphia native, he was formerly an arts and theater columnist for the Trenton Times; Aubrey has also worked with nonprofit professional theaters and coordinated art exhibitions in New Jersey and New York City.

“I realized that at its heart the Philadelphia Mummers were following an ancient human impulse to resist the darkness of winter and bring in new life with bright colors, joyful sounds, and plenty of alcohol,” says Aubrey. “The more I saw, the more the event spoke to me. And although it can be rude and ridiculous, the Mummers Parade also has a beauty and a spirit of fellowship.”

In addition to the high artistic value of the photographs, you can see the changes in both the parade and in American culture that have occurred over the past few decades. For example, Grigsby’s 1980s black and white images capture a time when Mummers were men of only European ancestry; but Aubrey’s more recent digital color photographs show the parade changing to include women, men and women of Hispanic and African backgrounds, and a gay brigade.

TAWA is a Greater Trenton nonprofit organization and has a history of more than 30 years exhibiting in such venues as the New Jersey State Museum, Trenton City Museum, Artworks Trenton, Prince Street Gallery in New York City, and more. For more information on the Trenton Artists Workshop Association, contact tawaexhibits@aol.com or find them at facebook.com/groups/14624432427334738.

The Trenton Free Public Library is located at 120 Academy Street, Trenton. Hours are Mondays through Thursdays, 9 a.m. to 8 p.m., and Friday and Saturdays, 9 a.m. to 5 p.m. For more information about the Library, call 609-392-7188. The Exhibit and Reception are free and open to the public.