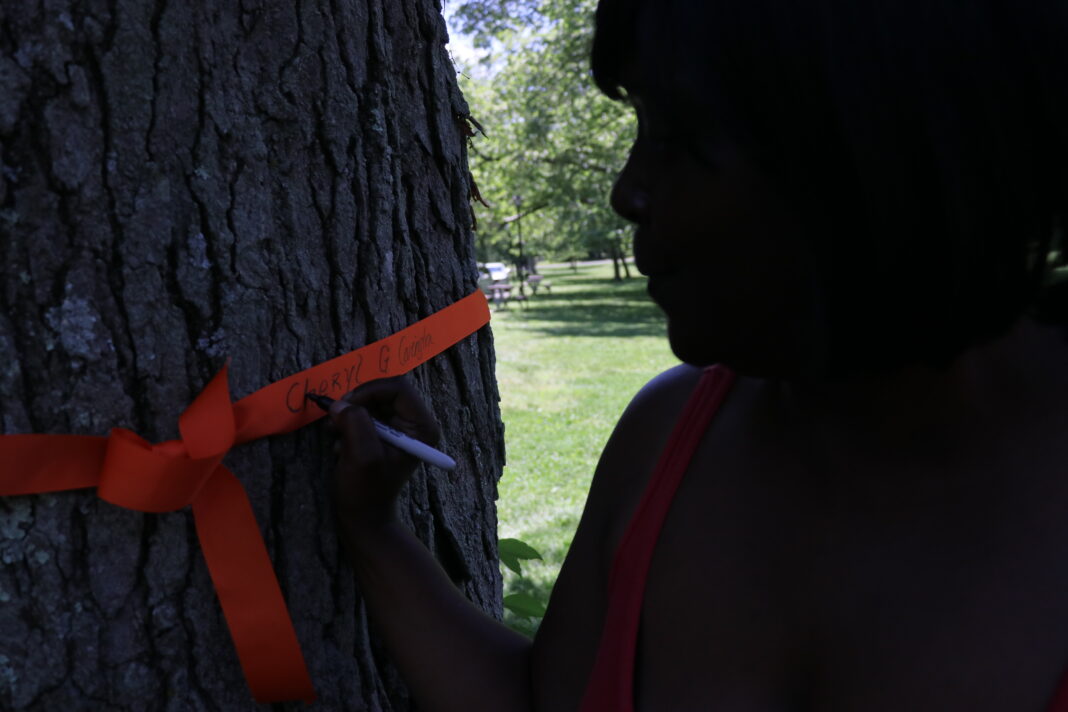 Across Cadwalader Park, orange ribbons were strung across trees as Mom’s Demands Action hosted a rally on Saturday.

National Gun Violence Awareness Day fell on June 3rd and Mom’s Demand Action hosted a rally over the weekend to remember those lost in Trenton. There were speeches made by political and community leaders asking for better gun control.

Teska Frisby is the Wear Orange Lead for Moms demands action. She explained that the hope is to start a conversation.

The color orange was chosen in 2013 after 15-year-old Hadiya Pendleton was shot and killed in Chicago just one week after she performed at President Obama’s second inauguration. Orange was her favorite color and the tradition continued. Though for Trenton residents, it hits closer to home. Cheryl Covington, Trenton Resident and a gunshot victim herself said this was in memorial to those she has lost to gun violence.

“It’s a memorial to know what you’ve been through and what you’re going through…it gives you hope and allows you to know that there are people out there that still care,” Covington said.

This rally comes after the nation focused on Gun Control due to the mass shootings across the United States. However, the rally aimed to create a discussion on providing Trenton youth with opportunities and growth.

“We got to think about how we can do things differently to have a positive impact…we have to empower them. And uplift them and let them know, nobody’s perfect,” said Assemblywoman Verlina Reynolds-Jackson to the crowd on Saturday. “So if you get to school late, it’s okay. Let me make sure you have lunch and snacks to get back home because I want you to come back to this safe space.”

Some Trenton residents are looking to increase policing across the city. Jeanette Mayfield, a retired Teacher for the Trenton Public School System, explained that there are multiple ways to help keep Trenton safe.

“I believe that police presence is the key in the community. Not only that, you know, but the young people coming up they have nothing to do in this city… We need to get with our community and get (kids) involved with what’s going on,” Mayfield said.

The answer lies somewhere in between. Mayor W. Reed Gusciora explained that the Trenton Police Department is slowly building its ranks.

“We’ve strived to get more officers on the streets. We lost 125 officers less than ten years ago. And we need to get those ranks back up because people expect the police out in the neighborhoods to at least speak to community policing. And we just don’t have the numbers to do that,” Mayor Gusciora said. “We hope to step up police patrols to get them out in the neighborhood as someone spoke about, have the summer camps for kids, and have the pools open. There are things to do in the summer. We’ve got to get the message out better so that families can take advantage of them.”