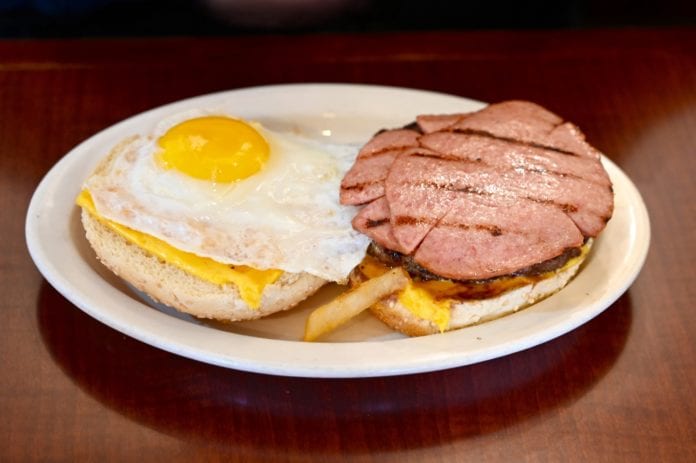 Pork roll or Taylor ham, as it is referred to in most of North Jersey, is a pork product made with a mix of sugar, salt and other spices. The savory yet sweet New Jerseyian delicacy (to some) may be comparable to either ham or Canadian bacon, but it truly sits in a category of its own, especially to those of us who have eaten it all our lives. This breakfast meat is almost always smoked and sold exclusively in New Jersey and originated right here in the city of Trenton.

The first version of pork roll can be traced back to 19th century New Jersey when a man by the name of John Taylor set up a small shop in Trenton. He started to market a product called “Taylor’s Prepared Ham” however, Taylor had come up with one simple yet important idea that would differentiate his product from German and Polish meats (which most people purchased at the time). Taylor decided that he would sell the meat rolled into a cloth sack so that the customer would have an easier time carrying, frying or slicing it without having to take it out of the package.

To this day, no one can say for sure what ingredients were used in Taylor’s Prepared Ham, and because of this a change needed to be made. In 1906, due to the Pure Food and Drug Act, Taylor was pressured into changing the name of his product and re-branded his mystery meat as “Taylor’s Pork Roll” or “Trenton Pork Roll” instead.

In today’s day in age it is unknown as to why the name “Taylor Ham” is used in North Jersey and not the South. Many people believe that it was because Taylor himself was better able to distribute his product or it was an attempt by local eateries to try and differentiate it from other breakfast meats on their menus. Either way, this delicious Trenton staple is one that New Jersey proudly celebrates.