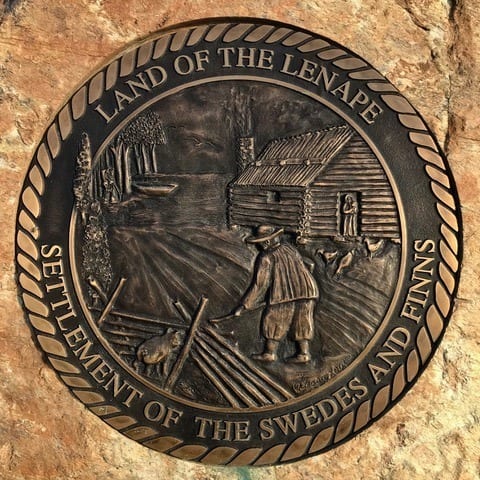 Very old. They came here starting in 1638, and settled large pieces of land along the Delaware River, on both sides of the river, from Trenton to Wilmington. It’s a fascinating slice of American colonial history that many people haven’t heard much about.

Luckily the Trenton Free Public Library recently mounted a engaging exhibit of drawings, photos and artifacts about these early colonialists, and it’s yours to enjoy today, Wednesday November 27 (9:00 a.m. to 12:00 noon), on Saturday, November 30 (9:00 a.m. to 5:00 p.m.) and then during normal Library hours through December. It’s located on the Mezzanine Gallery of the Library’s modern wing at 120 Academy Street, Trenton.

The Exhibit offers videos that beautifully depict the clothing, habitats and artifacts of these settlers, who today seem so primitive and distant, even though many loyal descendants live in the tri-state region. The 1600s were a time when most powerful European countries were attempting to colonize the vast, unchartered land we now call North America.

Below are some interesting excerpts from the Exhibit.

Begun as the New Sweden Colony by former Dutch governor of New Amsterdam, Peter Minuit, on behalf of the Kingdom of Sweden, land and trading arrangements were made with local Lenni Lenape leaders across the river from New Jersey in what is now Wilmington, Delaware. Graphic panels in the exhibition were created by the New Sweden Center in Wilmington and the Swedish American History Museum in Philadelphia. The photographic images of the South Jersey evidence of the early Scandinavian settlers were provided by Erik L. Burro, founder of Pennjerdel House.

The exhibit shows how the New Sweden colony began with the construction of Fort Christina in 1638 along the banks of the Christiana River near where it flows into the Delaware. A second fort, Nya Elfborg, was built 5 years later on the New Jersey side in today’s Elsinboro Twp., Salem County. Elfsborg was strategically located between Salem and Lower Alloway Creek, where it could defend entry to the Swedish Colony, which would extend as far upriver as the falls at Trenton.

Most of the early settlers were Swedish and Finnish farmers along with a small contingent of Swedish soldiers. Amicable relations with local Lenni Lenape tribes flourished as Europeans exchanged trade goods for high value beaver pelts and other animal furs.

For the rest of this nearly-forgotten piece of history, you’ll have to visit the Library yourself. It might just give you a peaceful, calming respite from the busy long weekend.