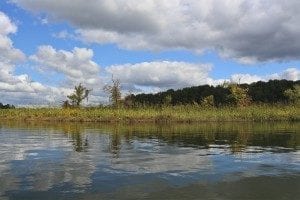 Trenton has many notable facilities and establishments delightfully located on the banks of the Delaware River. Think of Stacy Park and the Log Basin, great bits and pieces of the Delaware and Raritan Canal and Trails, active green areas like the South Riverwalk Park and the Cooper Pool and Field, as well as watery establishments like Ross Marine, Capital City Yacht Club and the Trenton Marine Center.

One incredible piece of marine real estate, the John A. Roebling Memorial Park, was discovered by a noted Trentonian. Charles Conrad Abbott (1843-1919), an American naturalist and author, was the first archaeologist to dig a historic site in New Jersey. By finding, as a young man, artifacts of the Lenape Indian, he preserved some special marshlands and uplands that would eventually be named in honor Trenton’s best-known patron, John A. Roebling.

An excerpt from Friends of the Abbott Marshlands, at abbottmarshlands.org, states the following: Charles Abbott grew up in Trenton, but as a boy loved roaming the meadows, marshes, and upland areas around the farms owned by his extended family on land included in what we know today as the Abbott Marshlands.  He was trained as a physician, earning a doctorate degree from the University of Pennsylvania in 1865 but he never practiced medicine.   In addition to his work in archaeology, he was a naturalist and a prolific writer. Eventually he made his home at the edge of the Marshlands, just inside of Hamilton Township, for many years. In 1872, he reported finding man-made implements in the Trenton glacial gravels on his farm. This discovery sparked an international debate and forty-year controversy concerning the antiquity of man in the New World. The controversy made the Abbott Farm District one of the best known archaeological sites in eastern North America to scientists on two continents, and to the American public.

In time, Abbott became the curator of the American Department of the University of Pennsylvania Museum of Archaeology and Palaeontology.

Many significant archaeological artifacts were discovered on the Abbott farms and surrounding area by Abbott and others.  It is recognized by archaeologists today as the largest site for Middle Woodland occupation in the Northeast and has been a key component of reconstructing the lifeways of the prehistoric inhabitants.  Because of its archaeological importance, the area that includes much of the Marshlands was designated the Abbott Farm District National Historic Landmark by the United States Department of Interior in 1976.

Parts of the marshlands and uplands, however, were not always pristine. In the later 1800s and into the 1930s, areas in it were made accessible to Trenton city-dwellers by rail and road, resulting in a lively, commercialized mecca. All manner of water-rides, dance halls and eateries quickly developed.

Jim C’s Broad Street Park Yesteryears blog, provides a good description of The Age of Opulence. His staircase (now nearly overgrown) was constructed circa 1889 by the Broad Street Land Association in conjunction with the creation of Spring Lake Park on the bluff above.  These grand steps provided access from this Park (1889 – 1906) and, later, White City Park (1907 – 1922) to the Spring Lake location up above. Spring Lake Park was created as a passive recreation park, but a number of amusements sprang up over time.

Luckily, the Broad Street Civic Association, formed in response to a development threat in the late 1930s, by 1957 had successfully acquired all of the land it could. This amazing community initiative was the work of a small group of dedicated men – including a certain Albin Bielawski, another man of vision, whom his friends called “Old Man Dreamer.”

Working with the small team as chairman of the Park Project Committee alongside his son-in-law Edward Krupa (chairman of the Park Improvement Program and later President of the whole Association), Mr. Bielawski led the group from raising just enough money to buy its first 77 acres of the vast area, through cleaning and clearing the land as appropriate, to convincing the Roebling family to donate enough that, along with funds from the less wealthy, the Association could buy the remaining 227-odd acres.

This entire stretch of land, which became the John A. Roebling Memorial Park, was sold to Mercer County in 1957 for $1 to be a designated wildlife refuge solely for passive recreation. It’s become quite a success.

Park visitors can enjoy the Tulpehaking Nature Center, at 157 Westcott Avenue, near the road leading down to the historic Isaac Watson House and to Watson Woods. Owned by Mercer County and operated by the County’s Park Commission, it is open Fridays and Saturdays from 10 a.m. to 4 p.m. The Nature Center is the primary access and interpretive hub for the Abbott Marshlands. It provides programs and exhibits that encourage visitors to explore and discover the cultural, historic and natural resources of the Abbott Marshlands. Admission is free for both the marshlands and the nature center. More at mercercountyparks.org. Bring binoculars!