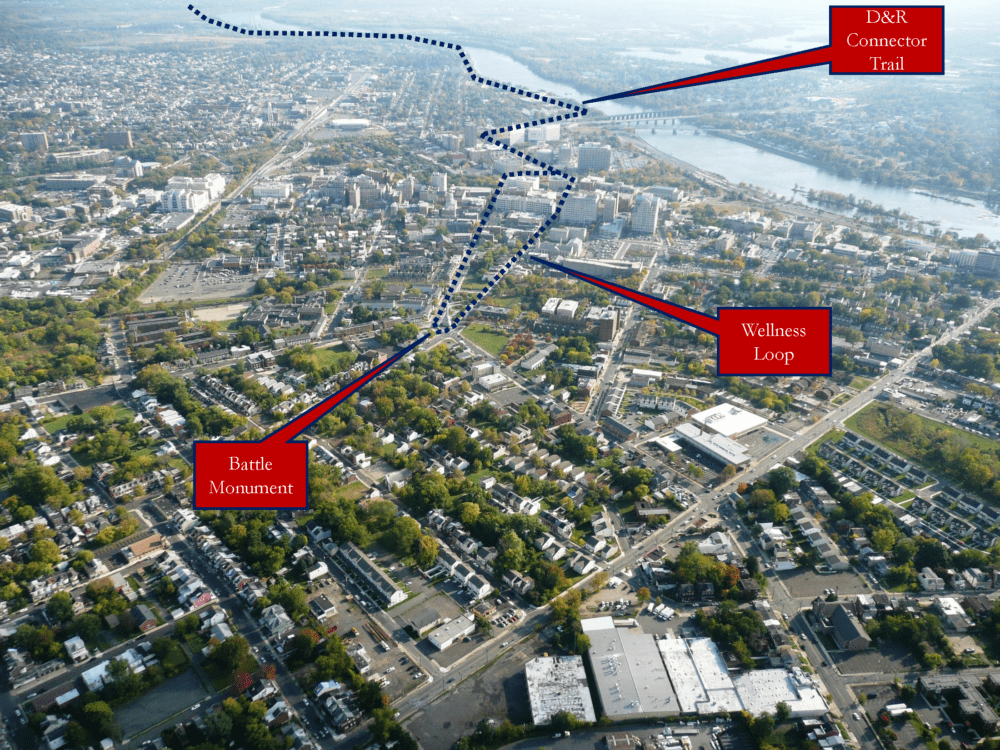 The City of Trenton is developing plans for two multi-use trail segments which will connect to existing trail circles including the Marine Terminal Trail and Cooper Field Connector.

The overall goal is to have a trail system developed throughout Trenton, connecting the city through walkable and bikeable circuits. Randy Baum, a Licensed Landscape Architect (LLA) and project manager with BRS, Inc., explained that projects like this have been developing for years.

“We have been looking at a bicycle trail system throughout the city for several years and have developed some; there’s the wellness loop up around the battle Monument Park, which ties into the D&R canal State Park which allows you to go to North to Stockton and beyond,” Baum said.

The City of Trenton has had a track record of creating trails across the city. “We’ve had several trail projects… all with welcoming arms because a bunch of people doesn’t have transportation other than bicycles,” Baum said.

Baum explained that this trail would connect Coopers Pool and come down to the riverfront, boarding Hamilton Township before rewinding to downtown.

“The whole gist behind this project is trying to get interconnectivity. So you can jump on a bicycle in North Trenton and ride to Borden town without crossing a minimal number of streets,” Baum said.

The project is a partnership between The City of Trenton, BRSInc, Johnson, Mirmiran, and Thompson (JMT). Neil Beach, the project manager with JMT, explained that the Marine Terminal Trail would link Trenton To Hamilton and the D&R Canal.

On top of public concerns about building the Trail, Sarah Leidenheimer, environmental scientist for the project, explained that they have gone through permits to make the trail environmentally safe. She explained that she reviewed the area, looking for wetlands, flood areas, and hazard areas, before evaluating the impact on those sites.

“The process of dealing with DEP and the regulatory agencies is lengthy and a lot of report writing and research involved,” Leidenheimer said.

With this connection set to be completed, it will connect Trenton to New Jersey and Pennsylvania trails across the country.

Sonia Szczesna is the director of active transportation for the Tri-state Transportation Campaign and is the New Jersey Vice Chair of the Circuit Trails Coalition.

She has worked with circuit trail coalition members to complete 500 miles of circuit trails created by 2025, and a total of 800 miles of connected trails across the east coast by 2040. For Trenton, this connection is an integral part of that puzzle.

“That section is a missing link between the D&R Canal Trail and the Wellness loop. When that’s finished, you’ll have a seamless ride from the Battle Monument or Cadwallader Park to Bordentown and ideally beyond. It’s not going to stop in Bordentown or Trenton. This network is trying to connect people across the region to be able to travel off-road on these trails,” Szczesna said.

By the time this pathway is complete, Trenton Residents will have a way to reach areas across New Jersey without a car. Beach explained that the ultimate goal is to create an active transportation network.