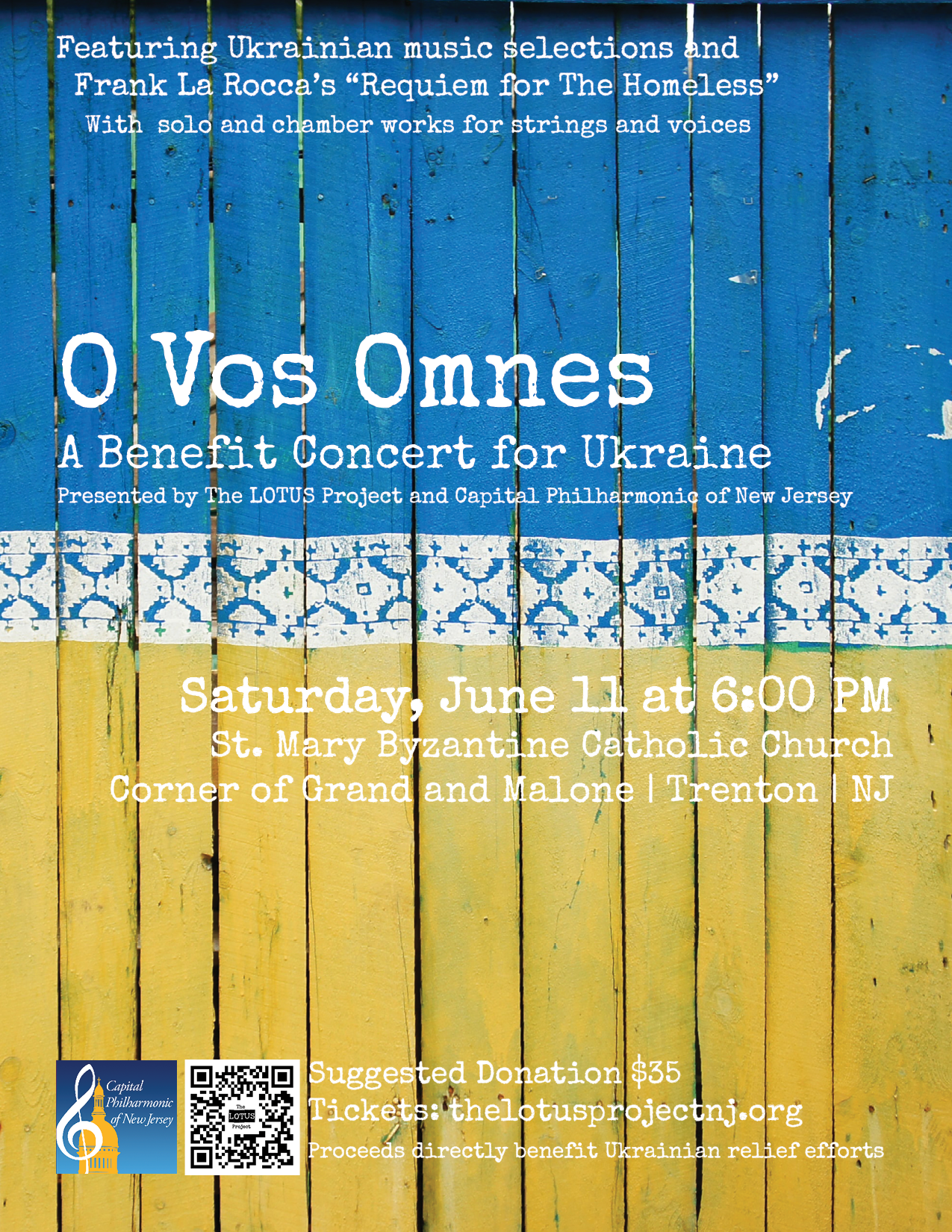 Many community members continue to share deep concern and sorrow over the tragic events taking place in Ukraine. The Trenton area has a large and dynamic Ukrainian-American community that quickly mobilized to gather donations of money and goods. But help is still needed.

Joining the droves of musicians and artists across the globe performing events to raise funds for Ukraine are The LOTUS Project and the Capital Philharmonic of New Jersey. These two local professional music organizations are collaborating to present a benefit concert for Ukraine on Saturday, June 11th, at St. Mary Byzantine Catholic Church in Trenton, with a goal of raising $10,000 toward relief efforts in Ukraine.

“Our board member, Omelan Kostoepksy, approached me about performing a Ukrainian benefit concert with Capital Philharmonic,” says Kate Mulligan, the newly-appointed Executive Director of the orchestra. “When I learned that The LOTUS Project already had a concert in the works, it only made sense for our ensembles to join forces for good in the city and for Ukraine.”

The concert features Ukrainian songs and compositions for chamber orchestra and vocal ensemble and will run approximately an hour long with no intermission. Inserted in the repertoire is an East-Coast premiere of Frank La Rocca, a New Jersey native composer now residing in California.

“The Requiem Mass for the Homeless” offers a sound world of healing, and is as appropriate for the massively displaced homelessness of the Ukrainian refugees as it is for the homeless on the streets of San Francisco or Trenton,” says Alicia Brozovich, Artistic Director of The LOTUS Project. “Once I connected with Frank La Rocca to request our using it as the centerpiece of the benefit concert, I learned that his mother was born to Ukranian parents who resided in Trenton. That sealed the deal.”

The concert title, “O Vos Omnes,” is a reference to the Tenebrae vigil service during Passion Week in Christian circles – traditionally held as the darkest time of the year in Christian spirituality. Selections include Ukrainian art and folksongs and a variety of smaller pieces for string instruments and voices.

The centerpiece of the concert is the “Requiem for the Homeless” by Frank La Rocca, who inserts a setting of “O Vos Omnes” at the end of the traditional Requiem mass structure. La Rocca is the grandson of early 20th century Ukrainian immigrants who made a home in Trenton, and this piece was selected as it relates to the plight of all those displaced by the war in Ukraine, and the deep spiritual traditions of Ukrainian people.

“My grandparents came to Trenton in 1918 from Ukraine to escape the Bolsheviks,” La Rocca shares. “They lived and worked among other Ukrainian and Polish immigrants, learning a little English from my mother, who picked it up when she went to school at age 5. Stepan and Anna Siminowicz were good, simple people who loved their adopted country, but remained immersed in their native tongue and customs within their Ukrainian-Polish enclave in Trenton. After Stepan’s death, my “Baba” came to live with us in Clifton.”