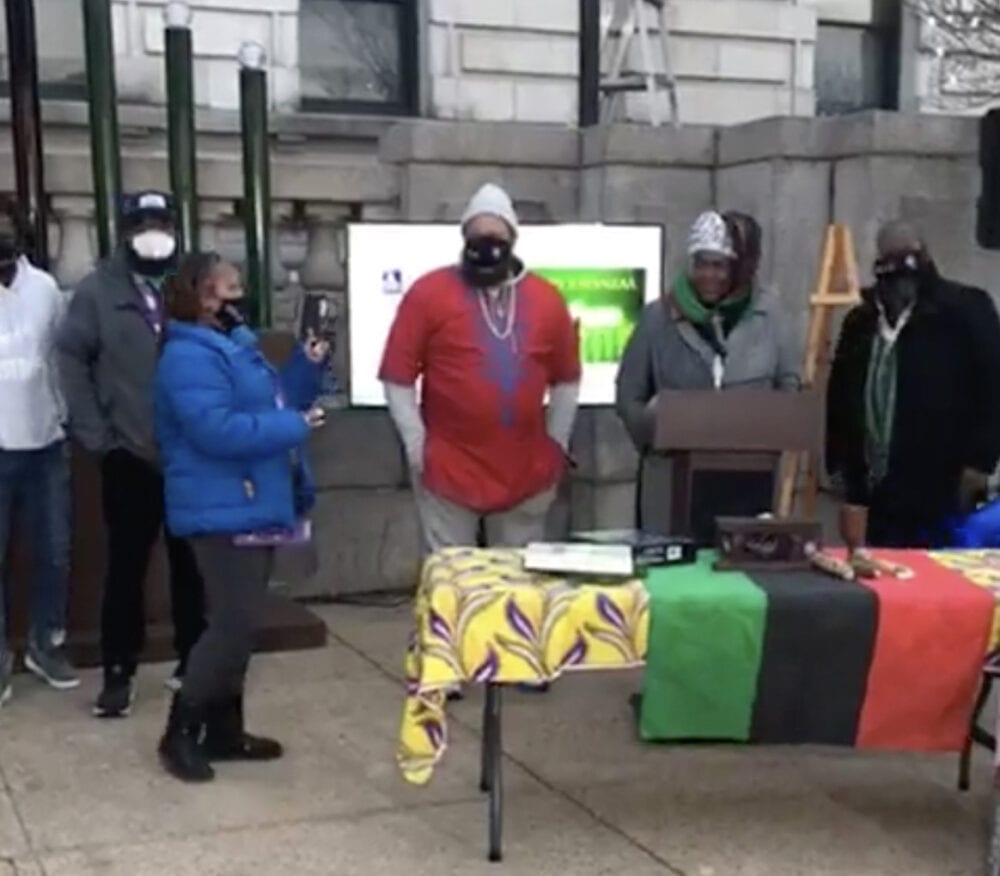 On Saturday, December 26, 2020, the community of Trenton gathered outside the front steps of City Hall to celebrate the start of Kwanzaa with the Smith Family Foundation. The celebration, which, in previous years, took place at the Trenton War Memorial, was moved outside City Hall due to COVID-19 restrictions.

The evening’s celebration began at 4:30 p.m. with an opening prayer and a violin performance by Ashanti Ross. During the chilly night, the Smith Family Foundation offered hot chocolate to keep attendees warm throughout the presentation.

“We wanted to host this because it is important,” said Mayor Reed Gusciora kicking off the evening. Despite having to switch the event’s location, Mayor Gusciora wanted to bring the meaning of Kwanzaa to the city of Trenton.

“If you look in the southern sky tonight, Saturn had crossed paths with Jupiter and is going to create a bright star, and that’s why this is so important,” said Mayor Gusciora. “It is representative of our city, to bring us together in unity and to have a better 2021 than it has been for 20.”

After a few words from the Mayor, County Commissioner and CEO of the Capital Area YMCA, Sam T. Frisby Jr., and Councilman Jerell Blakeley said a few words regarding the unification the celebration of Kwanzaa represents.

“This particular day of unity is so critical to our community,” said Frisby. “It feels like, with this pandemic and double pandemic that we’ve been dealing with, that we’ve not been on the same page. This gives us an opportunity to start this new year off on the same page.”

Blakeley said, “We may have come here on different boats, but we’re all here together. So we need to swim in the same direction, which is up stream rather than down stream, and look forward to doing that with everyone in 2021.”

The Smith Family Foundation’s Executive Director, Katherine Nunnally, started the evenings Kwanzaa presentation with a brief moment of silence to pay homage to those who have passed this year due to COVID-19 and other illnesses, including her husband’s brother. As the presentation progressed, Nunnally reminded the community how, although tragic, the COVID-19 pandemic paved a way for togetherness.

“This COVID pandemic has shown a light on so many disparities in our community from racial injustice, to health disparities, to the educational system, to so many things that affect our community right here in the city of Trenton,” she said. “But you know what, through it all, you can see it every single day, people are fighting together. They’re pulling together, they’re making sure those who don’t have, they have, and that’s what the spirit of Trenton is all about and that’s what the spirit of Kwanzaa is all about.”

According to Nunnally, Kwanzaa means “first fruits” and is a celebration of family, community and culture. Since its origination in 1966, the holiday signifies the importance of coming together and cherishing one-another. During Saturday’s presentation, Nunnally emphasized that signification.

“It’s about, ‘let’s pull together’ and that is what you see every single day in Trenton,” she said. “Yes, there’s some issues. Of course there’s issues. We’re human. There’s going to be issues. We have different thoughts and different pathways, but at the end of the day, I’m going to make sure you eat, and you’re going to make sure I have a jacket.”

As tradition, Nunnally led the community in a call and response reading of the seven principles of Kwanzaa, which are represented by seven candles on the kinara. The principles are Umoja (unity), Kujichagulia (self-determination), Ujima (collective work and responsibility), Ujamaa (cooperative econamics), Nia (purpose), Kuumba (creativity) and Imani (faith).

“These principles shouldn’t be put away. You should be wearing them as a badge of honor in your heart and you should be using them every single day,” said Nunnally. “The seven principles of Kwanzaa are supposed to be the fabric that thriving communities run on. That’s why it’s so important to share it today.”

To officially end the evening and start the celebration of Kwanzaa, the Smith Family Foundation team lit the seven candles of the kinara in the front of City Hall after reciting the principles. Before finishing the celebration, Nunnally lead the community in another tradition called Harambee, meaning ‘let’s pull together.’ While chanting Harambee, each individual put their hand in the air and pulled down in a power fist. The last person to hold out the word Harambee in the chant won a prize.

With Kwanzaa officially begun and the kinara candles lit, the City of Trenton and the Smith Family Foundation wished the community a happy Kwanzaa and a prosperous rest of the year.

“Trenton has triumphed through so much,” said Nunnally. “We have to end this year with love, peace and happiness.”