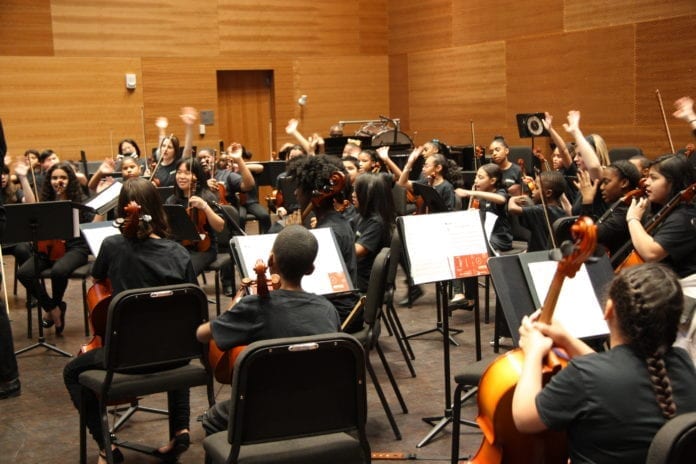 Trenton children who have been pursuing intensive string instrument study as part of the Trenton Music Makers Orchestra, will give a free community concert in celebration of Martin Luther King Day, today, January 21 at 5:30 p.m., at the Mildred and Ernest E. Mayo Concert Hall on the campus of The College of New Jersey.

The concert, co-sponsored by Trenton Music Makers and The College of New Jersey, will celebrate the growing partnership between the two organizations and will feature performances by the 100 young people who have been meeting after school for up to three years, and their teaching artists. It will also mark the public debut of the second graders from Wilson Elementary School who have joined the program this year as its Pre-Orchestra students.

Trenton Music Makers is in the fifth year of its intensive afterschool orchestra program, in partnership with the Trenton Public Schools. Modeled on the acclaimed El Sistema youth orchestras founded in Venezuela, Trenton Music Makers is made available to Trenton children at no charge, but with a high level of engagement and time commitment from the children and their families.

El Sistema orchestras throughout the world are documenting better school performance and retention, the development of meaningful social bonds, and even improved cognitive development and executive function, among the children who join their nucleos. As founder Jose Antonio Abreu puts it, “the orchestra is the only group that comes together with the sole purpose of agreeing with itself.”

There are currently over 100 El Sistema-inspired youth music programs in the United States, and a growing nationwide tradition of celebrating the legacy of Dr. Martin Luther King Jr. through concerts that highlight unfettered access, racial diversity, and objects lessons in positive culture that are the hallmarks of El Sistema. This concert will be one of dozens across the country, playing a wide variety of music but with a common purpose.

“This concert is a priceless opportunity for our kids to share their music with a wide community audience,” says Lydia Veilleux, Trenton Music Makers’ Artistic Director. “For our second-grade beginners, up through the ‘big kids’ who have been developing as musicians for three years, playing together in celebration of peace and justice will be a perfect beginning to 2019.”

The concert takes place at 5:30 p.m. in the Mildren and Ernest E. Mayo Concert Hall, at The College of New Jersey, 2000 Pennington Road in Ewing. Tickets are free of charge, but space is limited, and reservations are strongly recommended at www.trentonmusicmakers.org.