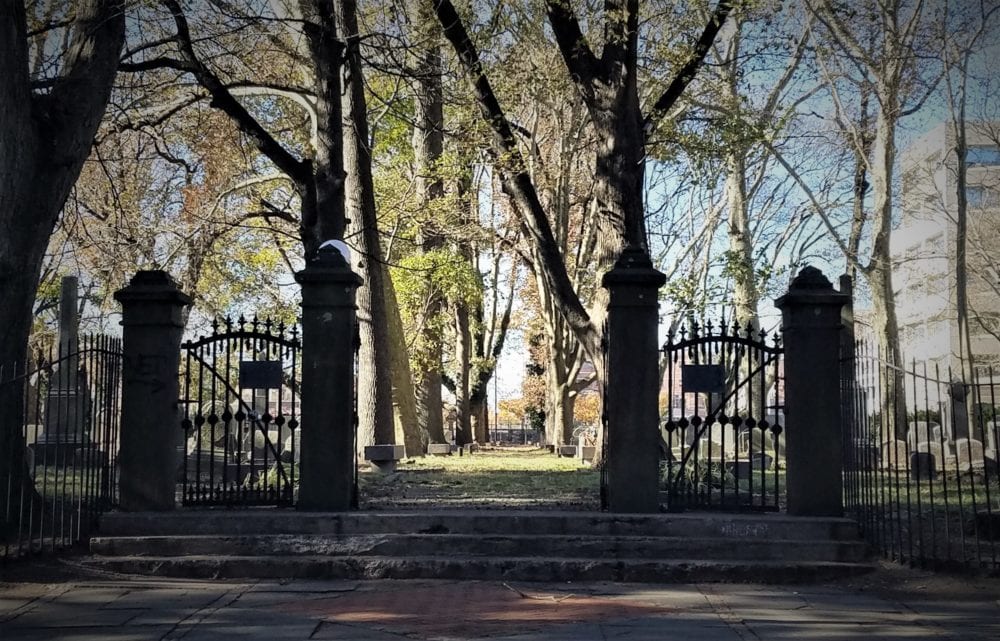 If you’re a bit of an explorer and enjoy discovering remarkable and unexpected treasures, Trenton has a lot to offer. With a past rich in diversity, prominence and initiative, the City is blessed with all manner of human-made places and artifacts that can tell many stories about its people, then and even now.

One of these gems is Mercer Cemetery, located at 44 South Clinton Avenue, catty-cornered to the Trenton Transit Center. It’s the City’s oldest non-sectarian burial ground, and it has gone through several periods of decline and restoration since its creation in 1841.  The first plots were sold and the first burial took place in 1842.  Many headstones from this early period still survive, although some are so worn that they’re difficult (but fun) to read.

The next year, the New Jersey State Legislature incorporated “Mercer Cemetery at Trenton,” and it quickly became the premiere burial choice for many of Trenton’s most prominent citizens, such as Trenton’s first Mayor Samuel Hamilton (1848-1849). Also, a few not-so-prominent citizens are laid to rest at this site, as the Cemetery is the home to colonial-era solders and some commoners too.

After Riverview Cemetery was created in 1858, Mercer Cemetery began to experience tough competition and started to decline, but in 1893, lot owners organized to take charge and rehabilitate the property.  To raise money, they sold a portion of land along the Assunpink Creek and bought up outstanding stocks of trees that were planted in an overall landscape design. A comprehensive drainage system was also installed.  By 1912, the rotting wooden fences had been replaced by brick walls and iron fences and the three entrance gates replaced.

The Victorian gravestones of this era are truly remarkable. An obelisk partially covered by a funeral shawl and an etched vase in black and grey are but two of the dozens of artistic sculptures you can find here.

Following the loss of its caretaker in 1972,  Mercer Cemetery again fell into disrepair, and the last burial took place the next year. As you might have guessed, the Cemetery was again rehabilitated, this time in the early 1990s through a NJ State Green Acres grant that funded a three-year rehabilitation project to invite public use.  Paths and walkways were resurfaced, granite benches and new lighting installed.

Unfortunately, the cemetery has again deteriorated to a degree that prevents it being open to the public. Trees planted more than a 100 years ago have become safety hazards and the canopy has caused the stones, mostly made of sandstone, to erode. To address this situation, Mercer Cemetery’s Board of Directors was reconstituted in early 2019.  Through the formation of city, county and state partnerships, the Board has aggressively instituted a plan of action to rehabilitate this important historic landmark.

On November 16, 2019, the new Board held a Flag Raising and Tour ceremony at the center of the Cemetery, with Board President Stephan Konopka, Mayor Reed Gusciora, County Freeholders Nina D. Melker and Pasquale “Pat” Colavita, Jr., and the color-guard scouts from Boy Scout Troop 180A (Allentown, NJ) and Boy Scout Troop 116 (Millstone, NJ). A cold day it was, but the caring and the commitment of those gathered made this writer’s heart warm.

It is anticipated that once the Cemetery property is made secure, attractive and user-friendly again, it can be reopened as an historical green space for the public to enjoy.  We’ll keep you posted on its progress.