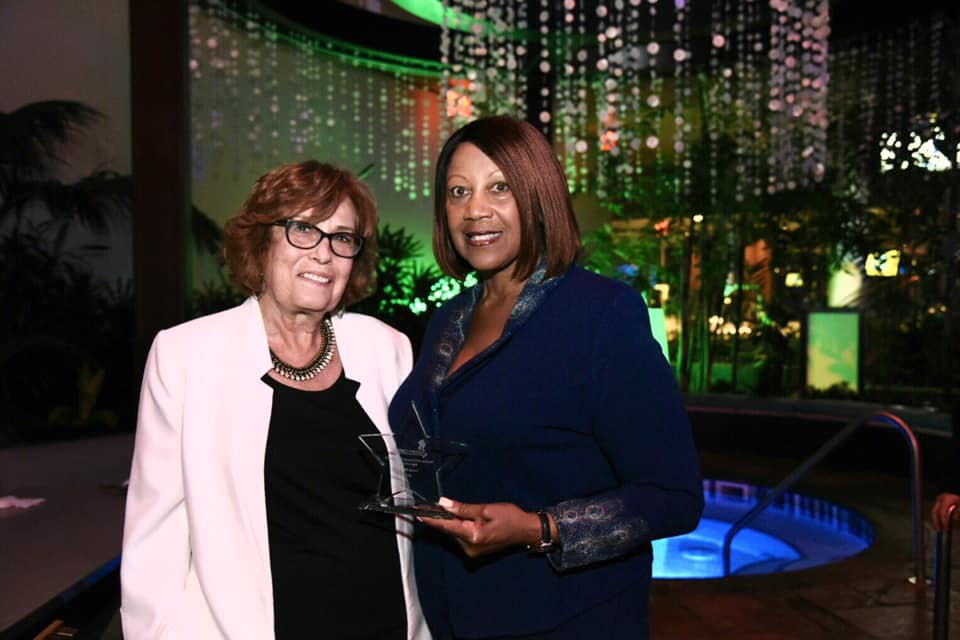 Connie Mercer, a long-time advocate for homeless individuals and the founder and chief executive officer of HomeFront, a Mercer County nonprofit dedicated to ending homelessness, was presented by Acting Governor Sheila Oliver as the 2019 recipient of the State’s Housing and Economic Development Hall of Fame Award Sunday night.

Ms. Mercer received the award on the eve of the Governor’s Conference on Housing and Economic Development, which took place September 16 and continued today at Harrah’s Resort in Atlantic City.

“Connie Mercer’s tireless advocacy and tenacity in fighting for the homeless stems from her remarkable ability to connect with, and compassionately care for, people in need of help,” said Acting Governor Oliver, who serves as Commissioner of the Department of Community Affairs (DCA).  “Governor Murphy and I deeply admire her work in building Homefront from the ground up and we are so thrilled that she has received this meaningful Housing and Economic Development Hall of Fame recognition.”

The annual conference, now in its 23rd year, brings together housing industry and economic development leaders to participate in seven diverse tracks ranging from housing for community needs to women and business to economic development; includes an Atlantic City area bus tour; and is capped by a keynote address by Dr. DeForest B. Soaries, Jr., the senior pastor of First Baptist Church of Lincoln Gardens in Somerset, a pioneer of faith-based community development, and former New Jersey Secretary of State.

HomeFront began in 1991 after Connie Mercer made a visit to a motel on the Route 1 strip in Mercer County and witnessed firsthand the impact of homelessness, particularly on women and children.

From her kitchen table, she began planning what would become HomeFront, today one of Central Jersey’s leading nonprofit social service agencies. HomeFront’s mission is to end homelessness in Central Jersey by harnessing the caring, resources, and expertise of the community. She began with a group of volunteers who provided meals for families living in these motels.

HomeFront now offers a comprehensive services model to address all of the underlying causes of homelessness. Included among its 35 programs are housing assistance, education, life-skills and employment training classes, childcare, and enrichment for people who are homeless or at high risk of becoming so. On any given night, HomeFront provides shelter to over 450 people, two-thirds of whom are children, through its Family Campus temporary shelter, transitional and permanent housing. In the past year alone, families called upon HomeFront over 29,000 times seeking shelter, food and other life-changing assistance.

According to the U.S. Department of Housing and Urban Development, 8,864 men, women and children in 6,748 households were identified as experiencing homelessness in New Jersey during the annual Point-in-Time Count of individuals and families earlier this year.

“I have learned over the years that the most transformative changes to the community take place when government and nonprofits work together along with private citizens, businesses, and organizations,” said Connie Mercer. “The pooling of expertise, caring, and resources enables us to solve big problems and builds trust between all involved. We are thrilled to be recognized for helping housing and economic development work. And as we are, I want to give a special thank you to Celia Bernstein, a leader at HomeFront who has been integral to our work and growth in the community for over a quarter of a century.”

Prior to founding HomeFront, Ms. Mercer, who has a master’s degree in clinical psychology, was executive director of the Interstate Consortium on Residential Child Care and then Deputy Director of Program Operations for the Illinois Department of Children and Family Services. She began her social services career with the Canadian Mental Health Association where she created a network of 19 group homes for disturbed youth.