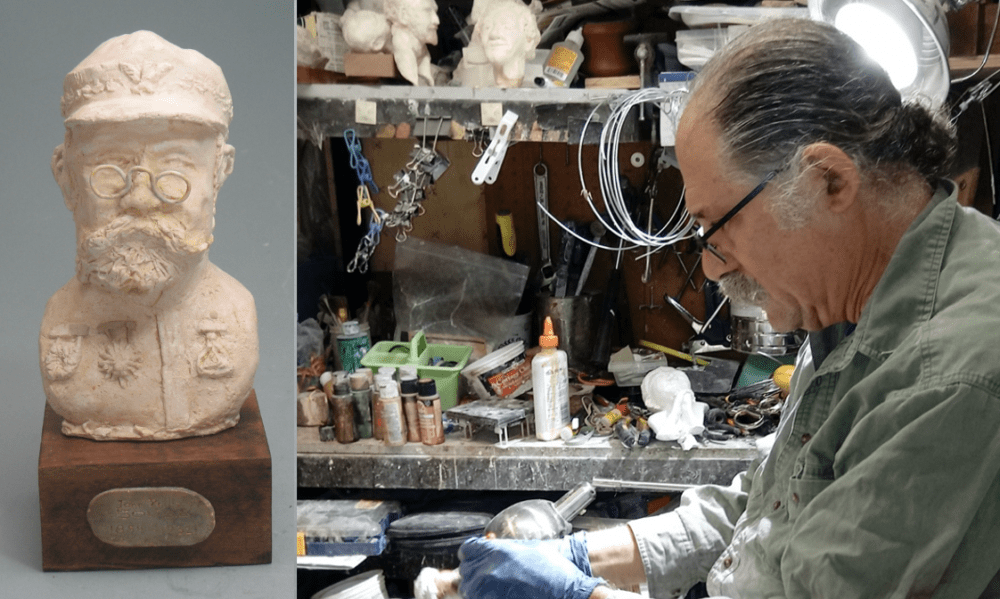 For the past eight years, local sculptor, Harry Jackendoff, has been creating busts for buyers around the world. Between literary icons, legendary composers and admired philosophers, Jackendoff has been bringing to life the renowned idols of society.

What started out as a simple gift to his wife in 2012 turned into a career changing moment. “(My wife and I) were out to Hollywood where my son works and lives when we went into a Hollywood piano store,” said Jackendoff. “My wife is a pianist and she saw a statue of (composer) Rachmaninoff that was not very good and she said ‘I bet you can do better than that’.”  That is exactly what he did.

According to Jackendoff, his bust of Rachmaninoff turned out much better than he expected. “And that’s how they began,” he said.

Since then, Jackendoff created his own business called Trenton Cultural Castings running out of his basement. When deciding on how to spend his years in retirement from his previous work in the corporate world of training systems and computer systems testing and development, Jackendoff realized his artistic talents can fill a niche hole that was missing in the market for sculptures.

However, after completing busts of all notable 20th century composers within a shorter amount of time than expected, Jackendoff decided to move on to creating busts of children literary authors.

He said, “I decided that I wanted to start doing children’s authors because children’s authors and illustrators were very, very important in making us the people who we are, and they’re given short trips. I thought, ‘well, nobody’s made them into heroes yet’. And they are heroes.”

As of right now, Jackendoff has over 11 sculptures of children’s literary authors for sale on his website in addition to the 30+ different busts of composers.

For the past 8 years, Jackendoff has been adding category after category to his website. In addition to his composer and children’s author caollection, Jackendoff has busts of idols in categories such as psychologist/educators, media/radio/film, generals, founders, engineers/scientists, lawyers, economists, broadway stars, cartoonists, philosophers, musicians/poets/chefs, artists and writers.

With over 12 categories of art, Jackendoff is finding it difficult to make room for his pieces in his make-shift basement workshop. “There’s no place to stand in the workshop. There’s not two feet,” he said.

In his basement, the 72 year old is struggling to work. Having two pieces of wood attached to an old kitchen chair as a working area and a constant flow of plaster dust that him and his wife have to breathe through everyday is not working.

Currently, Jackendoff is looking to find a suitable workshop for his business. He is also looking to hire a someone to help make back-ups of his most popular sellers. “There’s got to be a place. There’s places all over Trenton,” he said.

Despite the struggles Jackendoff is facing at the moment, he still continues to sell and create admired artwork for his customers, that even himself is impressed with. He said, “From time to time I look at (my art) and I say, ‘gracious, I don’t know how I ever did that’.”

To view the variety of artwork Mr. Jackendoff has available, visit his company website at: https://www.trentonculturalcastings.com